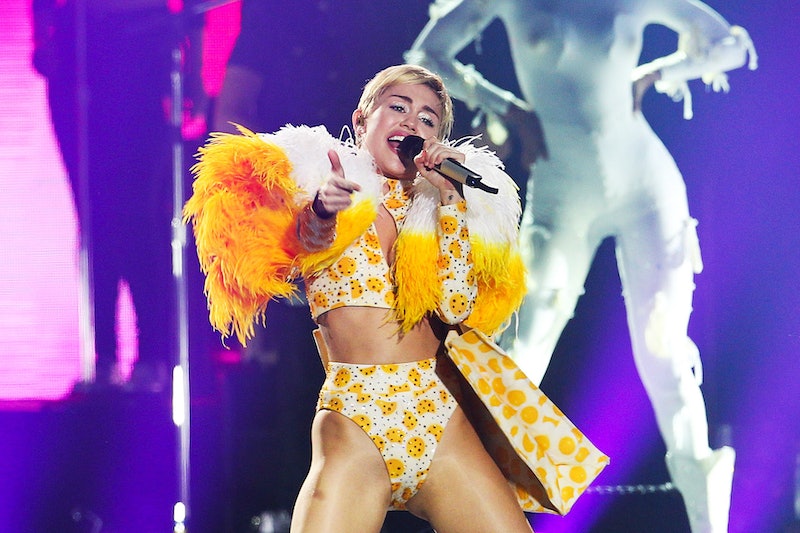 It seems no other celebrity has been as inspiring recently as Miley Cyrus. The pop star opened up about her gender identity and launched her new charity, the Happy Hippie Foundation to support homeless LGBT youth. And not only that, in an interview with Time, Cyrus revealed in an interview that she now understands how important it is to be happy even when she is not in a relationship.

Cyrus sounds wise beyond her 22 years when she tells Time, "It has a lot to do with being a feminist, but I’m finally O.K. with being alone. I think that’s something we have to talk about more: that you can be alone."

Who Cyrus is dating has always been a hot topic among fans, especially after her broken engagement to Liam Hemsworth and high profile breakup with Patrick Schwarzenegger. To see the singer taking back the conversation about her love life and saying that her relationships do not define her is a big step forward, and a great message to send to her fans.

She also points out how privileged we are to live in an era where the freedom to be alone is an option for women:

There are times in my life where I’ve had boyfriends or girlfriends. And there are times where I just love being with myself and don’t want to give part of myself away to someone else ... I think that’s a new freedom for women, especially. I don’t know that my mother would have been able to be 22 and secure in being alone. But my future doesn’t rely on having a partner.

Fans both young and old should take her wisdom to heart. Way too often women are defined by their relationship status. We see it in the media and we see it in our day-to-day lives. Cyrus has learned happiness starts from within and it can be freeing to depend on no one other than yourself.

Even cooler? Cyrus continues to speak out against labeling. For her, defining herself through her sexuality is limiting. She proudly rejects social norms and instead simply embraces her identity as she sees it. "There’s all this pressure to define yourself sexually, but why?"

The former Hannah Montana actress is quickly becoming one of the best role models for women around, simply by speaking openly and truthfully about her personal life. She has proven she is so much more than a headline about who she is dating. Now, she is giving her fans the strength to just as comfortable as she is. Between her candid comments about feminism, gender identity, and sexually, and embarking on a new adventure with her Happy Hippie Foundation, Cyrus is accomplishing amazing things all on her own.

As wonderful as being in a relationship can be, life can be just as awesome if you are single. Having Cyrus acknowledge this truth will hopefully inspire young women to enjoy the freedom of choosing themselves just as much as Cyrus does.