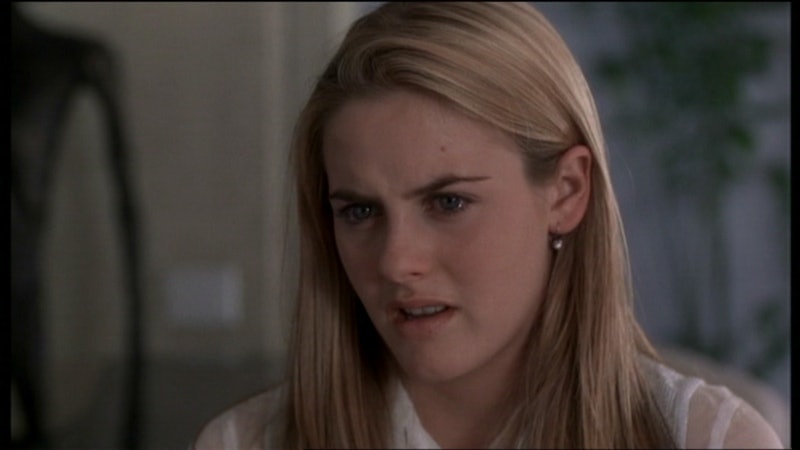 This is something bad that happens to me a lot: I get resting bitch face. I can also be someone who is naturally a little cold; a tough one to crack or even accurately read. For whatever reason, some folks give off inaccessible vibes and other people can tend to hold onto that impression — that someone doesn't like them because of their frosty exterior — even after they get validation that the hater in question actually does like them. Once you've decided that someone hates you, it's so hard to convince your brain to think otherwise. But take it from me, a person who has been through this: It's so hard when you can't accept someone doesn't hate you even if they've clearly stated other wise.

It took a while for me to learn to not internalize interactions and hunches as personal. Perhaps my boss responds to an earnest email of mine with a stark, emoticon-free, one-line reply. Before, I'd default to mentally crumble. I would assume that I had obviously enraged them and now they despise me and will probably never want to work with me again. Anyway, despite them following me back on Twitter or catching a piece of secondhand praise from a colleague, I'd assume they totally hate me. This is kind of a narcissistic mindset, actually, to assume I get the blame because I have that kind of power and persuasion when, in reality, the curtness probably stemmed from something else entirely, that had nothing to do with me. Maybe they were distracted, or hangry. There's no way to know, but that doesn't stop us from assuming that it's just because they hate us totally, plain and simple.

While we can all hopefully outgrow these paranoid suspicions of loathing, here are some very real struggles of feeling like people hate you even when they don't.

You forget what normal human verbal responses are when in conversation

What is my face doing?? Your brain gets all plagued with suspicions and paranoia and it's no longer natural to converse with certain people. What could and SHOULD be a natural dialogue gets crippled with your own brain's assumptions. It's exhausting to talk with folks, actually.

Just in case that person you think hates you is going so you can prepare* before arrival.

You will basically do anything that person asks you to do

This was especially toxic back when I decided that my bosses hated me so I'd accept even the most annoying/difficult/demanding assignment they'd ask me to do. Essentially, when someone who you think hates you asks a favor, it shows they actually trust (or at least tolerate) you. But, as a paranoid person who knows otherwise, you're desperate to win their approval and perhaps doing this favor is just the ticket...? (Spoiler: probably not.)

You end up catering to that person way too much

When hosting an event, you make sure you have their fav cocktail of choice and that their glass stays full. You also make a special effort to engage them with other guests to create a comfortable setting for them. To be honest, though, it can get a bit ridiculous and desperate (at least, when I do it).

...or completely avoid them

Because if you actually approach them, they might yet again "ice" you out. And by "ice" I mean "continue their completely normal human interaction with you like they do with literally anyone else."

You give up on getting (even necessary) attention easily

Seriously, though, I knew a woman in college who I thought for sure hated me. Every time I saw her in our dorm building and offered a timid greeting, she'd breeze right by. Turns out she's deaf in her left ear — which is the exact location of the lounge area from the entrance where I'd always see her. It was all in my head. This kind of paranoid social thinking can be incredibly damaging or even toxic if it happens in your professional life. When you have these doubts, it's always worth directly speaking to the people involved. Even though no one has time to hold your hand and make you feel special all the time, it's never a waste of time to get everyone on the same page and make sure there's no bad blood.

No reassurance is believable enough

Real talk: What would it take to erase all paranoia that this person or group of people won't accept you? A certain quantity of hugs? A dedicated chapter to the wonder that is you in an upcoming collection of their personal essays? Friendship tattoos? Since your insistence that someone hates you is mostly about you projecting your insecurities onto their benign actions, it's likely that nothing will ever quite persuade your brain to accept the truth. But that's fine. You'll learn eventually and in the meantime, at least all your "haters" get to have a full glass at your parties.

You end up missing out on a lot

Honestly, bb, you can't continue thinking this way. It's exhausting, a waste of brain waves, and ultimately, totally detrimental to your well-being. You could be using that energy to move forward in your career, call your mom, fashion a sweet new DIY toy for your cat. Anything is a better use of time. If you can honestly admit to yourself you feel a specific person or group of people will never accept or admire you, shrug it off. Know that most often, when a person speaks with you curtly, in a rude way, or even ignores you, it usually have nothing to do with you. It's their own ego or deal and you have two options: discuss it with them in an honest, bare, and non-threatening way, or simply don't worry about it. Easier said than done, I know, but it's possible. People do it all the time! And so can you because you are a worthwhile, magnificent specimen of human. Don't forget that.