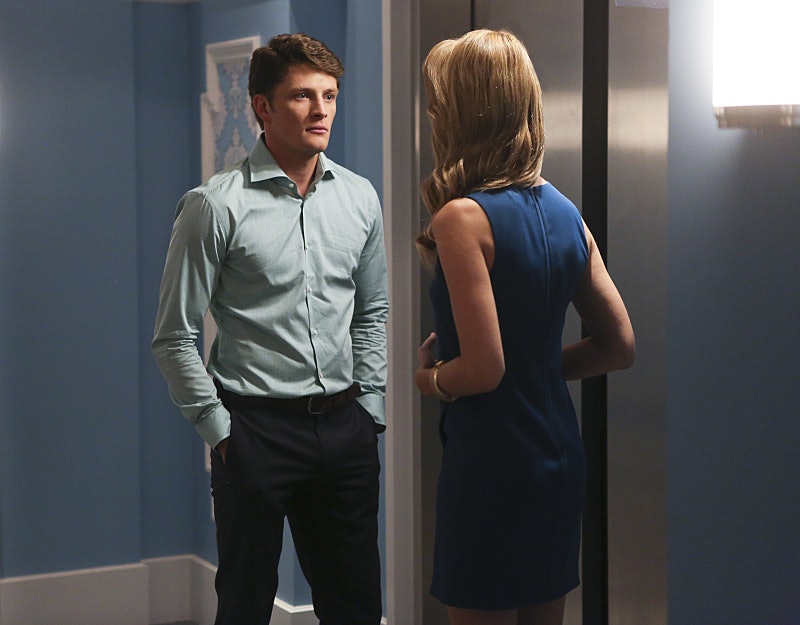 Jane the Virgin has much more than a traditional love triangle going on — it has a love polygon. In addition to Michael and Rafael both being in love with Jane, and Petra still being in love with Rafael, there are serious Petra and Michael 'shippers for Jane the Virgin. While most fans of Jane the Virgin are busy deciding if they are #TeamRafael or #TeamMichael before the Season 1 finale airs on May 11, there is a sect that wants Michael and Petra to get together. And though I'm not in this group, I can see why the 'shipping of the exes has become so popular.

Petra and Michael have an interesting dynamic. As a detective, Michael is quite aware of Petra's not-so-moral behavior, so he kind of knows her better than most other characters on the show do. And they make a good team when it comes to catching bad guys, since Michael took Petra's concern over Roman Zazo seriously, while her ex-husband Rafael did not. And he was there for her to embrace after she was abducted by (and killed) Roman.

The actor who portrays Michael, Brett Dier, talked about the potential of a Petra and Michael pairing with TVLine since he had favorited a Petra-Michael tweet. Dier said, "I thought it was funny that people are 'shipping Michael and Petra. But who knows, right? Who knows what could happen?"

I definitely agree with Dier's sentiment of "Who knows what could happen?" but I still think the combination is a long shot (for now). If Petra and Michael did get together though, here are six things you could expect to go down on Jane the Virgin.

When Michael's ex-girlfriend Andie creepily stalked Jane in an effort to get back with Michael, Jane handled it in a classy way. She knew she didn't have a claim on Michael and just wanted him to be happy. But if Michael got with Petra... uhhh, that's a whole other story. Jane knows that Petra is capable of manipulating situations and is a skilled liar, since Petra lied about her mother pushing Alba down the stairs! Even if Jane was 100 percent over Michael, she still would not be OK with this pairing. And I'm sure she'd assume Petra was using Michael to win back Rafael.

A Pissed-Off — But Maybe Relieved? — Rafael

Although I am sometimes concerned that Petra's scheming will win Rafael back, his heart-to-hearts with Luisa seem to prove he really is in love with Jane and made a terrible mistake by letting her go (no duh, Rafael). Rafael is super jealous of Michael's relationship with Jane, so having Michael stop pursuing her would be a major plus. But since Petra is Rafael's ex-wife, he would still be pissed about Michael's love life interfering with his own. And even if he doesn't want to be with Petra anymore, would he be OK with Jane's ex being with his ex? That has to be awkward.

A Supportive — If Not Forlorn — Rogelio

Rogelio is on #TeamMichael and while he may want his daughter to end up with the police detective, the vain Rogelio sometimes values his friendship with Michael more than Jane's own relationship with her ex. Rogelio will be proud of his bro for moving on and dating another strong, savvy woman, but that's also because Rogelio is pretty oblivious and may not realize how evil Petra can be. (And he wants Michael to be "knocking boots.") Rogelio would be less upset with whom Michael was dating and more upset that his favorite bro would have less time for mani-pedis.

The Return Of Billy

Hey, remember Michael's shady brother, Billy? Where has that crazy kid been? He was dating Jane's friend Lina and working at the Marbella, but hasn't been around since "Chapter 12." If he is still working at the Marbella, then he'd be quite interested that his brother was dating one of the owners. And since he's not above criminal activity, he may actually really like that his brother is dating Petra. Regardless of why Billy would be interested in his older brother's new girlfriend, the Cordero brothers should be reunited.

Since Jane's mom is the ultimate Jane-Michael 'shipper, Xiomara would be devastated that Michael would date Petra. I think she'd actually be disappointed that Michael could have feelings for a woman with such a different moral code than her beloved Jane. And considering that Xo knows Petra's mom was to blame for pushing Alba down the stairs, Xo would probably also join Jane at her "pissed-off" level.

A Lot Of Grilled Cheese

When Jane's family is stressed, they turn to the one thing that never lets you down — a good grilled cheese. If Michael betrayed them by going out with Petra (and I do think they'd feel betrayed), Alba, Xo, and Jane would need their delicious sandwiches stat. And over the cheesy goodness, they'd concoct a plan to make sure that Petra wasn't toying with Michael.

So Petra — if you do end up with Michael, you better watch your back. The Villanueva women will be coming for you.

More like this
'A League Of Their Own' Star Abbi Jacobson Is Engaged To Jodi Balfour
By Jake Viswanath
What’s New On Netflix: 'Never Have I Ever' & 'Indian Matchmaking' Return
By Arya Roshanian
On 'Industry,' Marisa Abela Takes Control
By Morgan Leigh Davies
Lisa Kudrow Explained How Her Body Image Changed While Filming 'Friends'
By Grace Wehniainen
Get Even More From Bustle — Sign Up For The Newsletter