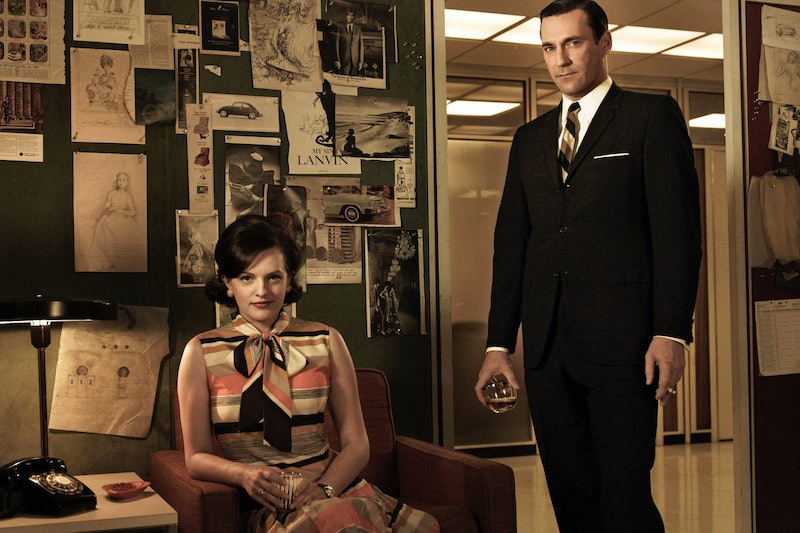 Personally, it's my belief that Mad Men has always been a duet. Right from the beginning, the '60s era series was telling Don Draper's story parallel to Peggy Olson's. The first episode introduced us to the world of Mad Men from two distinct points of view: from that of an ad exec who appeared to be on top of the world (Don) and a young woman just starting out professionally (Peggy). From the moment Peggy became Don's secretary, their lives became forever entwined: Their relationship has evolved time and time again over the years — from boss/employee to mentor/protégé to friends — and every shift has drastically impacted the show. But, what are the true defining moments of Don and Peggy's relationship?

There have been so many brilliant moments between these two, it's a difficult feat to point out just nine moments that define them. However, difficult does not mean impossible. Because of the nature of their relationship, it is important to look at the ugly moments as well as the beautiful ones. Every time Don and Peggy pull away from each other, they end up coming back together again — their lives are simply better for them having known one another.

1. Peggy Attempts To Flirt With Don

Following Joan's advice, Peggy subtly tried to come on to Don in the pilot, and it backfired. The scene is uncomfortable, but it marks the true beginning of Don and Peggy's relationship. The scene also set a standard very early on clarifying what existed between them would be something more meaningful than a sexual relationship.

Freddy Rumsen was the first person to see Peggy's talent, but it was Don who officially put her on the Belle Jolie account. The moment she was invited back to Don's office for drinks, everything changed for Peggy. She began her ascent in the professional world, and it was Don, the man who pitched her copy, who she looked to for inspiration.

3. Don Pushes Peggy To Come Back To Work

Don was the only person who knew Peggy gave birth, and he was the only person who visited her in the hospital. His advice — "It will shock you how much this never happened," — ultimately got Peggy out of her hospital bed and back to work. The real turning point for Peggy would come later when she realized she did not want to spend her entire life living a lie. When she confessed to Pete that she gave their son up for adoption, Peggy proved she would be stronger than Dick Whitman.

Don was still treating Peggy like his secretary in Season 2. This was most apparent in "The New Girl," when Don recruits Peggy to help him cover up the car accident with his latest mistress Bobbi. After a talk with Bobbi, Peggy uses the situation as leverage to change the power dynamic in her relationship with Don for good. From that episode on, Peggy never referred to Don as "Mr. Draper" again.

5. When Don Promised To Spend The Rest Of His Life Trying To Hire Peggy

At the end of Season 3, Peggy was tired of being overlooked and underappreciated at work, and when the news about the new agency broke, Peggy was accomplished enough to have options beyond SCDP. However, Don ensured she would join the company by giving Peggy the accolades she deserved. When he promised he would spend the rest of his life trying to hire her if she left, it was finally clear Don and Peggy had truly become colleagues.

If forced to pick one scene to single out from Season 4's "The Suitcase," then I have to go with the callback to the series premiere. After a long night of fighting and talking, Peggy comforted Don over the loss of Anna Draper by placing her hand on his and giving it a reassuring squeeze before they returned to work. This time, Don did not pull away, and it is basically one of the purest moments of friendship to ever happen.

The more problems Don had with Megan, the more he took his anger out on Peggy. By the time he threw money in her face, Peggy was done. Times when Peggy been in awe of Don and his work had long since past, and the look of pure triumph on her face as she left the firm for a job where she could continue to move forward in life was priceless.

It took the show almost two whole seasons to repair the damage Don did to his relationship with Peggy, but at the end of the first half of Season 7, the two pulled another all-nighter and properly reconciled. "I worry about a lot of things, but I never worry about you," Don told Peggy before they danced to "My Way." Not only were they equals in the scene, but Don revealed to Peggy how much confidence he had in her.

Faced with potentially being pushed out of the agency for good, Don spends all night convincing Peggy she can pitch to Burger Chef. Right from the start, Peggy was clearly the heir to Don's throne, but when she finally gave the pitch, the look on Don's face made it clear Peggy's future is far brighter than his. Peggy is everything Don wishes he could be: strong, honest, and driven.