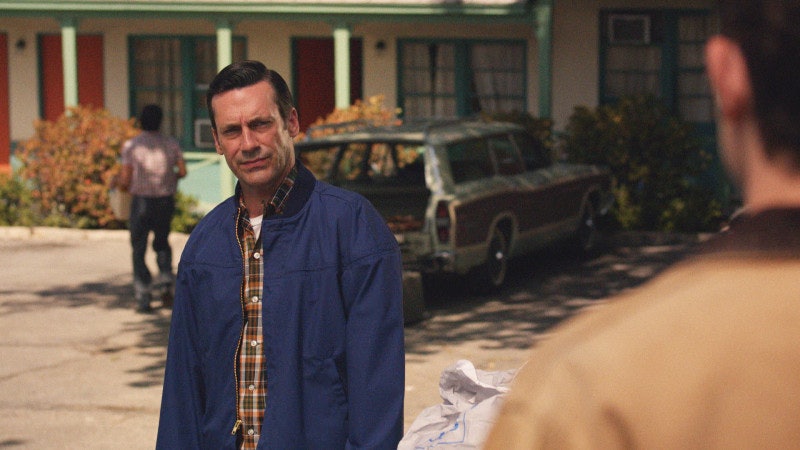 On Sunday, May 17, the series finale of Mad Men will premiere and all of us die-hard fans will likely be reaching for our respective tissue boxes. I'm not at all ready to say goodbye, so let's just brace ourselves and cross our fingers and toes in hopes of a Peggy Olson spinoff being in the works. For seven seasons, we've watched an ensemble of deeply complex — and brilliantly acted — characters acclimate to the ever-changing era known as the 1960s. At the helm of these characters we've come to know and love is our favorite brooding protagonist, Don Draper (portrayed, of course, by the inimitably talented Jon Hamm).

Oh, Don. Talk about the quintessential antihero, eh? Although I have found myself rooting for Don throughout a majority of the series — even when his behavior led me to many an eye-roll, "tsk tsk," and wagging finger — the past few episodes have left me absolutely infuriated. Look, Don, I get it — you've had a tough road to hoe. Your life is complicated. You've been steeped in an existential crisis for years where every attempt at stability and satisfaction succeeds in only leaving you more confused, more enveloped by dissatisfaction, and decidedly more broody. Blah, bla, blah. None of these preceding factors necessarily validate eschewing all your professional and personal responsibilities to travel across the country and accomplish — what exactly was the point of you traveling across the country, again?

In last week's "The Milk and Honey Route," we saw Don haplessly take a phone book to the face — among other things — during a trip to a bed and breakfast where a crew of veterans he had befriended mistakenly assumed he had stolen money from them. You would have thought that would have been the point where Don would say, "OK, it's probably time to get back to New York City and reality about now." Nope! The episode ended with Don (spoiler alert!) relinquishing his car to the young man who had been the actual culprit in stealing the veterans' money. What exactly are you planning to do from that bus stop in the middle of nowhere, Don? Oh yeah, your ex-wife, Betty Draper, just got diagnosed with terminal lung cancer, but you wouldn't know that from all the way in the midwest, would you? I can't.

We've only got one episode left for Don to turn things around (literally), and I've got some ideas of what he needs to do in order to glean a happy ending before we bid our final adieu to Mad Men.

Go Back To New York City

Seriously, you need to get back there ASAP! You don't have to stay, or even continue at McCann Erickson, because I'm pretty sure you're fired at this point anyhow. There are several things you should probably take care of, though, before you relocate, if that's what you want to end up doing.

Address The Situation With Betty & Your Children

Although they are no longer married, Betty and Don have been through a lot together and remain important to each other. She is also the mother of his children, and I'm guessing they could use his support right now.

I know that things are tough, Don, but I've spent seven seasons watching you take one step forward and ten million steps back. No, life isn't always fair. No, life isn't always kind, or easy, or how we would have pictured it. Still, you're so busy entrenching yourself in the negatives and brooding, you haven't even taken time to see the fruits of your labor, and the good things around you. Not to be harsh, but for reals, get it together.

Again, you're pretty much fired anyway, so why not have a fresh start? It's time for Don to pick a different career that he's not constantly miserable with. Am I the only one that feels like Don has never liked his job?

Notice the word "plan" here. Don't just hop into your car — which is gone now — and trek across the country. Handle your business and plan to go somewhere that you can decompress and reflect on your future aspirations. Better yet, you can even do a stay-cation. I love stay-cations; no muss, no fuss, and it's a great way to recharge the batteries.

Check In With Joan

Since Don basically was all "bye!" and peaced out, Joan was the subject of McCann Erickson's abhorrent sexism, and was given a buyout of 50 cents on the dollar to leave. That's kind of the worst ending for Joan we could see, and I'd bet a phone call or visit would be nice right about now.

And I don't mean with a stiff cocktail. Has anyone seen Don take even a swig of water lately? Maybe the dehydration is partially responsible for his erratic behavior.