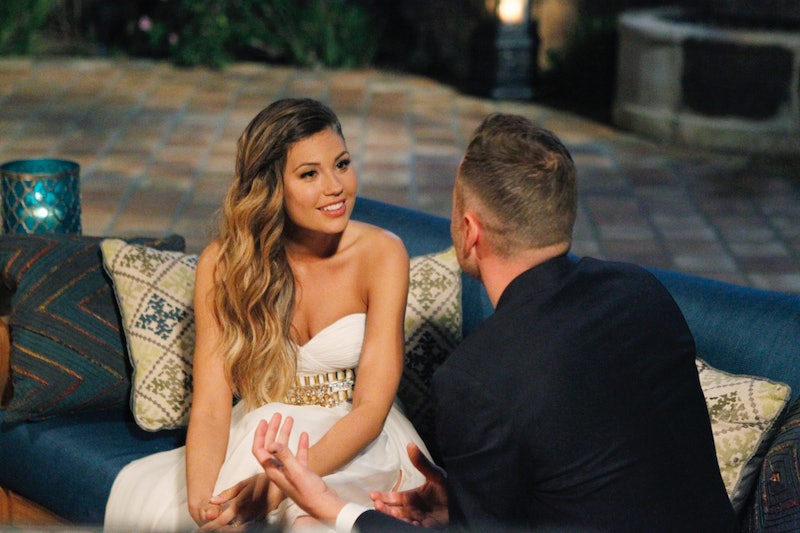 Whether you approve of the way The Bachelorette Season 11 is going to run or not, you know you're waiting with bated breath to find out who the actual Bachelorette is going to be. Within minutes of the big reveal that both Kaitlyn Bristowe and Britt Nilsson would compete in the series premiere for the honor, people were already breaking off into #TeamKaitlyn and #TeamBritt. As awful as it is, and as many feelings as I have about the whole situation, one woman will ultimately have to win, and now that we know all about the men who will be fighting for ~*tru3 l0ve*~ let's play a game: If Britt wins the title of Bachelorette, which of the contestants are toast?

It kind of goes without saying that there are going to be some interesting men this season based on their Bachelorette-approved job titles alone, but Britt and Kaitlyn have such different personalities that I can't see them having the same taste in man... except for Chris Soules, of course. But I'll just have to find it in my heart to forgive them that lapse of judgment because WHY WOULD YOU WANT TO BE WITH SOMEONE WHO IS GOING TO FORCE YOU TO LEAVE YOUR ENTIRE LIFE BEHIND? Sorry, that's not the point right now. Suffice it to say that if the guys vote Kaitlyn off the island and keep Britt on to play student to Chris Harrison's love master, some of these guys won't even stand chance. And by some, I mean these six in particular.

Chris here is a dentist, so while he and Britt might be able to have lengthy conversations about how pretty their teeth are, I don't she'd go for him in the long run. Or, she'd do what she pretty much did to Chris on The Bachelor and openly admit that she hates everything about his relatively simple life, but basically lie and say she's totally into it when he tries to gauge her enthusiasm. Also, this new contestant's name is also Chris, so I feel like name association alone puts him at a real disadvantage from the get-go.

Britt seems like the kind of girl who wouldn't like it too much if the guy she's dating is a better dancer than her. (After all, she liked Chris Soules, and his dancing talent is questionable, as we all saw on Dancing With the Stars.) So Josh, the law student/exotic dancer, is totally out of the question. (See what I mean about the weird job titles?)

Look, I think everyone should have a shot at love, but Ryan M. is a junkyard specialist and I have no idea what that means. I doubt Britt will either and with so many guys competing, she doesn't have time for someone to explain their job for hours.

Let's say Britt did pick this "amateur sex coach," I can tell you how these first few weeks into their relationship post-Bachelorette would be. Britt would see him coaching other couples about sex in an amateur fashion, (I'm assuming that's pretty much what he does?) and pull him aside every other day to have a lengthy discussion with him about why he feels the need to help other people have sex. Get it? I'm equating this to the conversation Britt had with Chris Soules about how he kissed everything with legs for the entirety of the season. I'm assuming her conversations with Shawn E. would go about as well as hers did with Chris Soules. (That was also known as the beginning to the end of her connection with the former Bachelor.)

Tanner's really only on here because I think he's way too nice for Britt. Guys, Tanner's first-date fear is "my date not liking me as much as I like her." This feels way to sweet and well-intentioned for this show. Also, this guy kinda looks like someone I went to high school with, and he was a huge jerk.

Tony may just be the only person in history to have better hair than Britt, and that just won't do in a marriage.