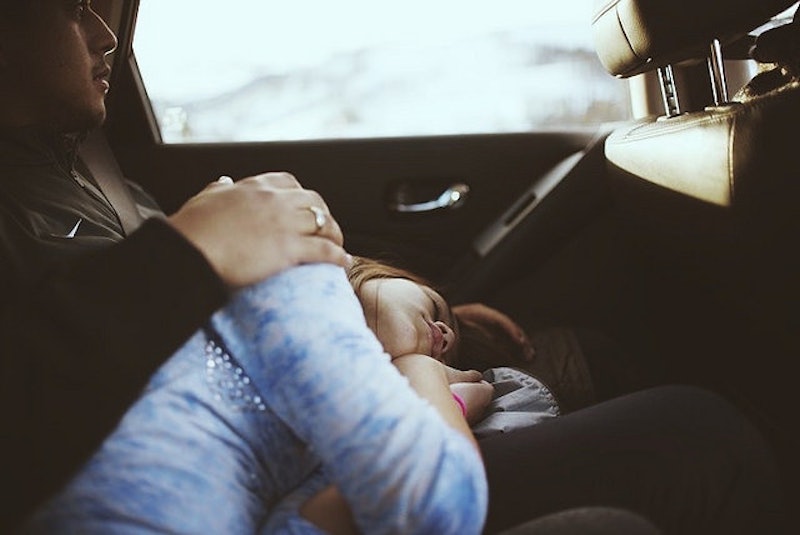 Road trip season has officially started, and it’s time to get in the car and go. Maybe you reside in L.A., and practically live in your car anyway, or perhaps you’re a New Yorker and don’t have any wheels of your own, but have been known to rent a car and drive Upstate. If you’re in a relationship, you and your significant other may each have your own car or share one. Whether it’s for a quick trip to the store or a long road trip, couples develop weird habits when in the car together.

You might be somewhere in between; an auto-owner, but someone who prefers using public transportation. Whatever kind of driver you are, sometimes you just want to get out of town and see something different for a change. A small road trip, even if your destination is only an hour away, can still feel like a mini-vacay. You may switch off at who’s the driver, and who's on the passenger side. Do you prefer to let your partner do all the driving while you enjoy the scenery, and act as the trip's music supervisor, or does doing the actual driving make you feel better and cut down on any car-sickness?

Whatever the circumstances, couples seem to spend a whole lot of time in their cars — and here's what happens:

1. You're too familiar with the driving away gag.

Isn't it hilarious when you're about to get in the car and your partner drives forward a little, and each time you try to get in again, they drive out of your reach. Yeah, not that hilarious, actually more annoying than anything, and yet some people think it's car-comedy-gold.

2. Car-pranking is more fun for your partner than for you.

Cars seem to inspire pranks and these pranks are usually harmless. Imagine if your car wasn't where you parked it, or it was completely wrapped in gift-paper, or even better if you found a fake parking ticket on your windshield. No, probably not that funny, though some people think that kind of humor is funny as shit.Then there are those times when your partner will deliberately hit the brakes so that the frappuccino you just got at the drive- through Starbucks, spills all over you. Don't worry you'll have your revenge when you change his license plate frame to one that features love for a football team he hates. Go Team You!

3. You have music power struggles.

Your S.O. claims that the driver is the one who should be in control of what tunes you're going to listen to in the car, but you think your taste in music is far superior to theirs, and that you should be permanently in charge. Anytime you're not fully focused on your music pick, your partner is going to switch to their playlist of Ukranian EDM making it less of an awesome road trip, and more of a way to drive you insane.

4. There's a lot of singing in your car.

You sing when you're alone, or when you're with your partner and the two of you bust out some epic duets.The car can be a great place for a little spontaneous karaoke. Then there are times when you sing with an accent just because you're in your car, and no one can judge.

5. Dancing isn't forbidden in your vehicle.

It's always a good idea when you are sitting for long periods of time, to stretch a little. Dancing is a great way to loosen your body up. Also, if you hear some cool beats coming from your sound system and you want to do a flash mobile mob for two in your car, why not? If someone in another car gives you the stink-eye, you can just drive away from those haters.

Where is there a better to practice your awesome air guitar, air drum, or air maracas than in your own mobile sound studio.The acoustics might be better, but at least in your car with your significant other, you've got a captive audience.

8. Things can get a little emotional for you.

You can go through the entire range of human emotions during one car trip. Hopefully you can keep it in check enough so that no one gets hurt. Express yourself in a safe way liking giving someone the finger under the dash, or getting your rage out by talking in a fake language rather than exploding at another driver. Your car is a safe space, make sure you keep the road safe as well.

9. Long trips are the perfect time for famous-practice.

It's only a matter of time until the world knows of your genius. Amy Schumer move over, you're going to be on the scene soon. Whether it's filming a webseries in your car or practicing what you'll say to the celebrity interviewers, your car is great for practicing for your 15 minutes of fame and who better to practice with than your partner. If they're in the car with you they won't be able to deny how spectacular you really are.

10. You use your time in the car to get fabulous.

When you're stopped at a light, that's a great time to pluck your eyebrows or to touch up your make-up. You want to make sure you're on fleek when you arrive to your glamorous destination, or Grandma's house.

You and your significant other love road trips, and you love to play games on those road trips. How much fun do you have when you play Never Have I Ever, What would you do, and Date, Marry, Kill. It's not that you're super competitive, but you do almost always win.

12. You're survivors of the water wars.

When your partner shows signs of surface street rage or doesn't change lanes to avoid that slow moving hooptie in front of you, you swear your head is going to explode. You know in your heart that you're a much better driver, even if it does take you three tries to parallel park.

14. You know the back seat intimately.

Privacy can sometimes be a difficult thing to find if you had to move back home with your parents or you have a roommate who is a little too interested in what you and your boo get up to. Besides, who doesn't enjoy a little car sex every now and then.

You can spend a lot of time in your car especially if you go on road trips. The journey is often as fun as you make it, and traveling will either strengthen your relationship or highlight it's weak spots. Whatever you do to make your car-time more enjoyable is fantastic, no matter how weird or crazy it might seem. The point is to enjoy the ride.