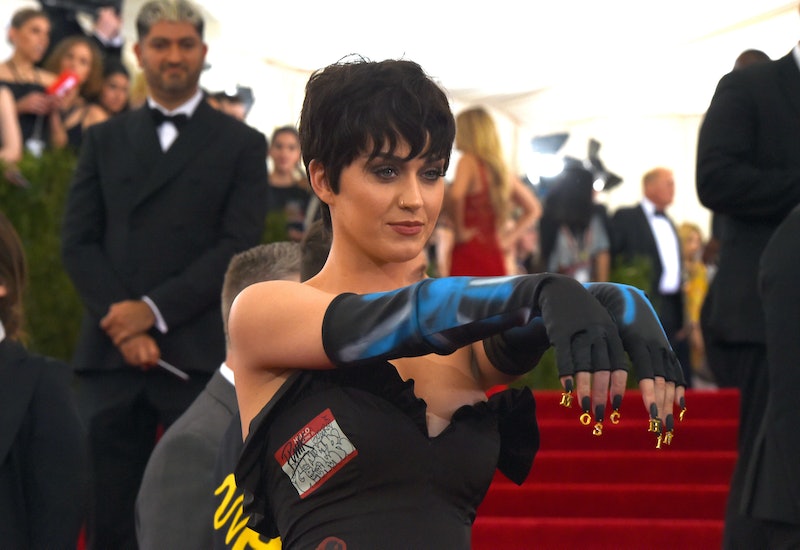 There's no denying it: breakups are hard. There are a myriad of ways people can cope with a breakup. I, personally, enjoy pizza, binge-watching episodes of How I Met Your Mother, and having a ton of awesome breakup anthems at my disposal. Even Hollywood's elite have experienced romantic bumps in the road, and if said elite happen to be singer-songwriters, they often use putting pen to paper as a catharsis after being jilted by that pesky thing called "love". In an interview with The Telegraph, Katy Perry spoke on how songwriting helped her move on from her 2012 divorce from comedian Russell Brand.

"I don't want to talk about him — my songs will say what I need to say," Perry said of Brand. During breakups — particularly those that occur on such a public scale — it can be easy for anyone to put fingers and take sides. However, it is pertinent to note that the only two people who can truly understand the depths of a romantic relationship are those that were apart of said relationship. As heartbreaking as many of Perry's and other singers' breakup ballads can be to listen to, it is nice to know that they are able to utilize their talent as a cathartic outlet to help both themselves and their fans move forward from difficult situations. Several other artists have used their craft to get over a breakup and delivered some of the best breakup songs to top the charts. Let's take a look, shall we?

My top celebrity crush, Ed Sheeran, penned the hit track "Don't" after being cheated on my an unnamed singer. He told Ellen DeGeneres that he "felt much better" after putting his feelings to paper.

Morissette's heartbreak over who may or may not be Dave Coullier from Full House led to the Grammy-winning track, "You Oughta Know".

"We Are Never Ever Getting Back Together" is one of Swift's many hit breakup anthems. Clearly the singer-songwriter has been doing fantabulous and it doesn't hurt to have some killer songwriting chops to purge the feelings we all have during the most ugh-worthy of breakups.

This legendary singer-songwriter penned the iconic track "You're So Vain" in 1972 and it remains a go-to breakup anthem today.

Despite having a rocky romance while also performing alongside each other in the band, Fleetwood Mac, Stevie Nicks and Lindsey Buckingham settled their difference by penning some of the greatest breakup hits to date.

Bareilles has stated that she wrote "Gravity" after experiencing her "first real heartbreak." I have a tendency to get super tangential when talking about how much I love, love, LOVE this song. Being that we don't have all day here, I'll just say this: I really freaking love this song.

Obviously we need to include the fierce and fabulous Perry on this list. Tracks like "Part Of Me" offered empowering lyrics to listen to when mending a broken heart.

More like this
Adele Says It Would Be “Wonderful” To Have Kids With Boyfriend Rich Paul
By Jake Viswanath
Who Is Betty Who Dating? The Australian Singer Is Married To Her Tour Photographer
By Radhika Menon
Adele Says Postponing Her Las Vegas Residency Was “Brutal”
By Alyssa Lapid
Rihanna Is America's Youngest Self-Made Woman Billionaire, According To 'Forbes'
By Hugh McIntyre
Get Even More From Bustle — Sign Up For The Newsletter