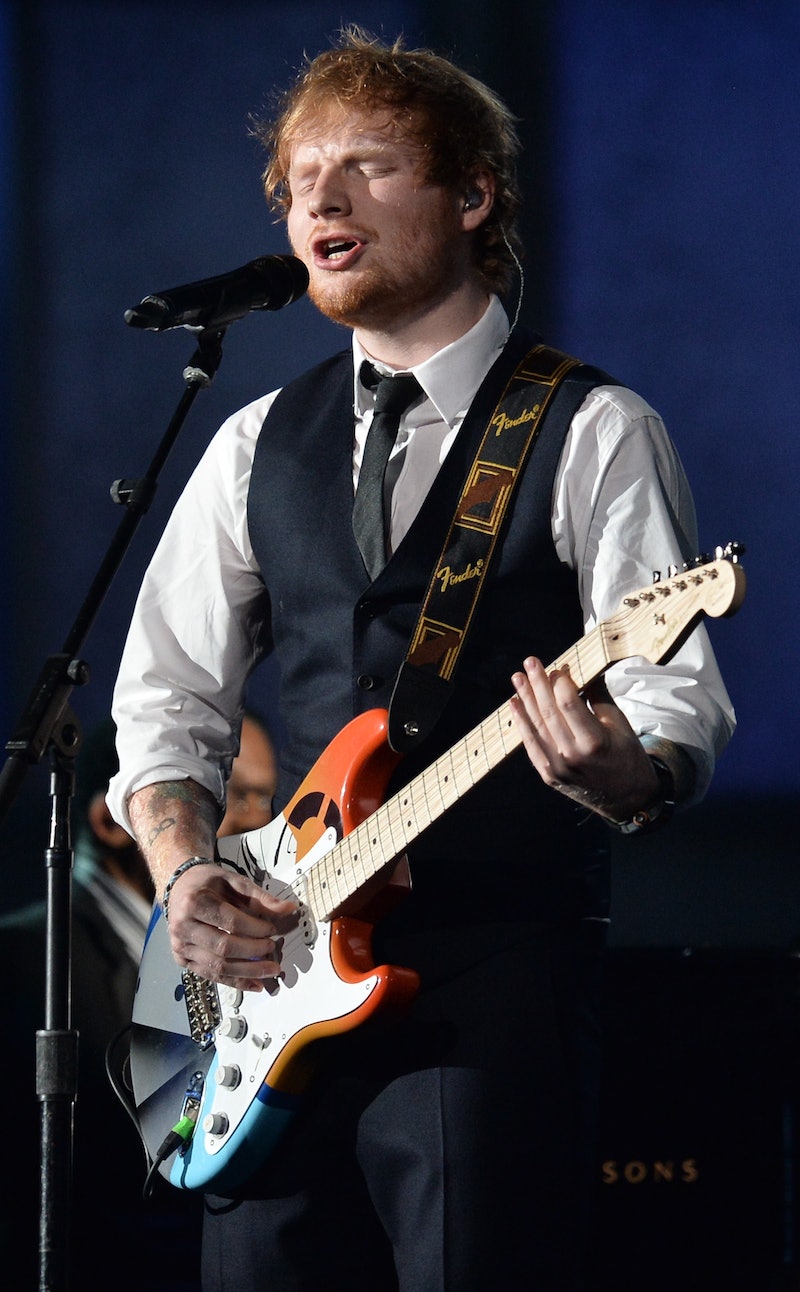 Oh hey, Ed Sheeran. From one redhead to another, I freaking love you. And I'm definitely not alone. After garnering much (well-deserved) success in the U.K., Sheeran took the United States by storm with 2011's smash hit "The A-Team," and things have been on the upswing for the ginger-haired singer/songwriter ever since. Not only is Sheeran multi-talented — he sings, writes his own music, plays guitar, and even dabbled in rapping — he also is possibly one of the nicest celebrities ever in the history of nicest celebrities ever. Seriously, just ask his longtime BFF/awesome person, Taylor Swift, who also is sweet and compassionate to a nearly pathological extent.

Have we chatted yet about how — even with his wild success and international fame — Sheeran has maintained his humility, and also proven to be one of the funniest and most down-to-earth celebs to ever grace our Twitter feeds? Yeah, he's all of those things too. I know that the boys from One Direction have been all the rage (no hate, of course — luff them too), and we could go on and on waxing poetic about the gloriousness that is that tall drink of water known as Bradley Cooper (I do that on a semi-regular basis), but let's face it — Ed Sheeran is the ultimate when it comes to picking your favorite celebrity crush.

Do you doubt me on this? Of course you don't (how could you?), but just in case, I have compiled a list of reasons that — as far as celebrity crushes go — Sheeran always reigns supreme.

It takes quite the talent to dominate the inimitable smash hit that was Blackstreet's "No Diggity" from 1996. Sheeran was more than up to the task, performing the hit alongside Passenger. Loved. It.

His Acoustic Sets Make Us Feel All The Feels

He Doesn't Mind Sharing The Spotlight

No egomania going on over here. Sheeran has performed with John Mayer, Herbie Hancock and Questlove during the 2015 Grammy Awards. He also has teamed up with various other artists, including Beyonce, newcomer Hoodie Allen, and — of course — Taylor Swift.

He Gets Sentimental Over His Fans

During a concert in Austin, Texas, Sheeran offered one fan the opportunity of maybe one of the most epic marriage proposals ever, allowing a man to come up onstage and propose to his longtime love — and Sheeran was so moved, he teared up! Aww!

Sheeran & Swift Doing Each Other's Makeup For The VMAs

I mean, what else do I have to say?

He Granted A Fan's Dying Wish

After catching wind of a Twitter campaign for Sheeran to sing to a 15-year-old fan with cystic fibrosis, Sheeran went to visit the fan and granted her dying wish by singing "Little Bird" to her shortly before her passing.

He Cried At The End Of The Notebook

Just Look At That Smile

He's Got The Moves

I didn't know "Thinking Out Loud" could get any better until the music video came out, and we all got to see Sheeran showcase some awesome dance moves.

Excuse me while I go melt into a puddle of my own swooning.