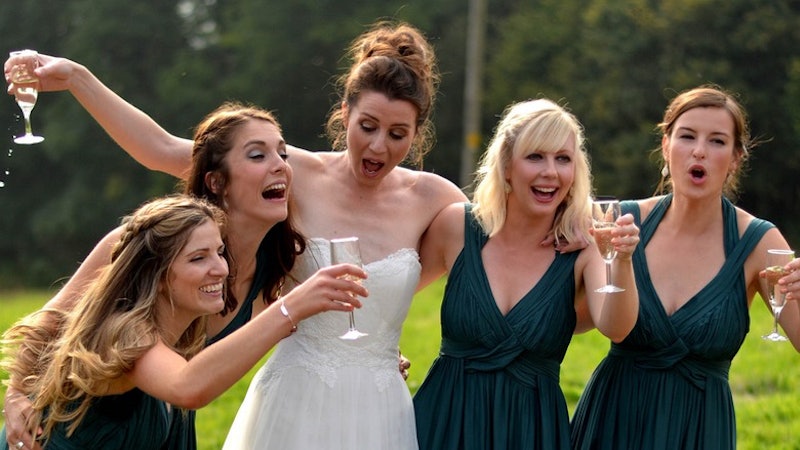 If you want to avoid turning some poor, unsuspecting woman getting married into a total bridezilla, there are certain things you should never say to a bride — especially if you're a bridesmaid. At this point, we've all heard of the term "bridezilla." While the show that focuses around these miserable cases is amazingly addictive, even the most levelheaded bride will fear that her requests and suggestions will be twisted into obnoxious demands based on this unfortunate label. Bridezillas definitely exist, and even the sane, mostly quiet brides can find themselves uncharacteristically stressed based on the amount of pressure they're under to create "the perfect day."

However, that doesn't give me permission to be a bridesmaidzilla, even though I wanted to scream off the rooftops about how I really felt over the situation. Yes, bridesmaidzillas exist as well.

Sometimes bridesmaids tend to step over the line and say or do things completely inappropriate. Sure, it could be due to the fact that their past bridesmaid experience is limited, or non-existent — or, maybe they just want a little extra attention on your special day. Maybe it's jealousy. Sure, why not? After all, in their fictionalized life plan, they were supposed to get married before you.

If you've been asked to be a bridesmaid, here are a few things you'll want to avoid saying to the bride, both before and during the wedding. That is, if you still want to be friends with her after she's married.

OK, let's chat girl to girl. Sometimes the bridesmaid dress sucks. Like, it really sucks. It's not your style, and it's yellow. Yellow is your worst color. If the party contains a lot of girls, someone will always be unhappy. The bride likely wants her girls to look good, but finding a universally flattering and stylish dress is really difficult if she's against mixing and matching.

If the bride is kind enough to chip in for dresses, just suck it up. If the rest of the group loves it and you hate it, just admit defeat. Even the best bridesmaid dress is something you probably won't wear again (since you'll always consider it to be a bridesmaid dress), so put on your happiest face during the wedding, and try to sell it on eBay the next day.

Really good brides always ask for bridesmaid recommendations before the dress is officially selected, so if you have any suggestions prior to the final decision, make sure to voice them when asked.

2. "Oh, Jenny from high school had the same dress."

Buying a dress can often be stressful, especially if you make the mistake of having 90 people at your appointment, a la Say Yes To The Dress. When the bride finally finds the right one, she'll be totally amped. All you need to tell her is that it's absolutely beautiful. Mentioning so-and-so had it will instantly make the bride search Facebook to see who wore it best. And if Jenny was a high school enemy, it's even worse.

3. "I can't wait to hook up with someone at your wedding!"

Weddings are an amazing place to meet people. Chances are, if they've been invited, they've already been screened by your bestie and don't have some kind of serial killer instinct inside.

If it happens, it happens. But making announcements like this will make the bride feel like you're using her special occasion as a chance to speed-date. She might also panic and think there's a chance you might hook up with her brother. Drunkenly mingling with family can be dangerous, so proceed with caution and use your brain.

Having a child-free wedding is truly up to the bride and groom. The bride isn't saying "I hate your kids," she's saying "I want an adult occasion where we don't have to worry about diaper changes and crying during the ceremony." She's probably gotten grief about the decision already from family, but at the end of the day, this is her wedding and her call to make.

Certain venues might not accommodate kids too well, so keep that in mind as well. Any kind of unexpected guest is a little disrespectful, but it's even worse when the venue isn't prepped for kids meals and booster seats.

If you're getting married close to the wedding of your BFF, comparisons are never any fun. Each wedding is original. The two of you have different visions, different ideas, and different budgets. Enjoy your friend's wedding for what it is.

Your bride probably gave you a deadline to order your dress. Waiting until last minute could really cause a lot of anxiety for the bride, especially when she still has to factor in alterations. Just bite the bullet, and place your order.

If money is tight, tell the bride ASAP. It's nothing to be ashamed about. She'd rather have you be honest than awkwardly skirt around the issue. Plus, honesty shows that you're not trying to purposely blow off her wedding.

7. "I might not be there, something just came up."

Emergencies sometimes happen, but if you're a little wary about your schedule (and were wary when you accepted to be a bridesmaid) based on work or family, you need to come clean to the bride. The last thing she wants is to plan around you the day before the wedding, since you just learned you couldn't have the day off.

Here's the situation. The wedding is at a hotel, and it's open bar. But unfortunately, you forgot to book a room in time. You can just crash with the bride, right?

Wrong. This is her wedding night, and the first night as an official Mrs. The bride might be too nervous to tell you no (since after all, you're friends), but she really doesn't want to entertain you after the wedding is over. Find a new roommate, or take a taxi home.

9. "My speech is going to make everyone crack up."

If you're the maid of honor, you're required to give a speech in front of a whole bunch of family members. You're a natural storyteller, so you're looking forward to the chance to really ham it up.

When the bride hears it'll be hilarious, she's going to worry that it's filled with stories based on college debauchery, alcoholic adventures, and perhaps failed relationships that ended based on something super embarrassing. You know — the stuff she's hoping her family never knows about. You can be funny, but don't be cruel.

The bride probably went bonkers while trying to organize her friends, and made her choice based on three things: location, time, and family commitment. Even if you're best friends, if you live three states away and are married to your job, chances are you won't be the best person to plan the bachelorette party and bridal shower. Be happy that you were asked to have an important role on the special day, and don't lose sleep over ranking.

More like this
These 4 Zodiac Signs Make The Best Bridesmaids
By Nina Kahn
'RHOP' Stars Robyn & Juan Reportedly Got Remarried & Filmed The Ceremony
By Brad Witter
'Bachelorette' Vet Clare Crawley Unveiled 2 Special Wedding Day Accessories
By Stephanie Topacio Long
The Banned 'Friends' Ad Shows Monica As You’ve Never Seen Her Before
By Sam Ramsden
Get Even More From Bustle — Sign Up For The Newsletter
From hair trends to relationship advice, our daily newsletter has everything you need to sound like a person who’s on TikTok, even if you aren’t.