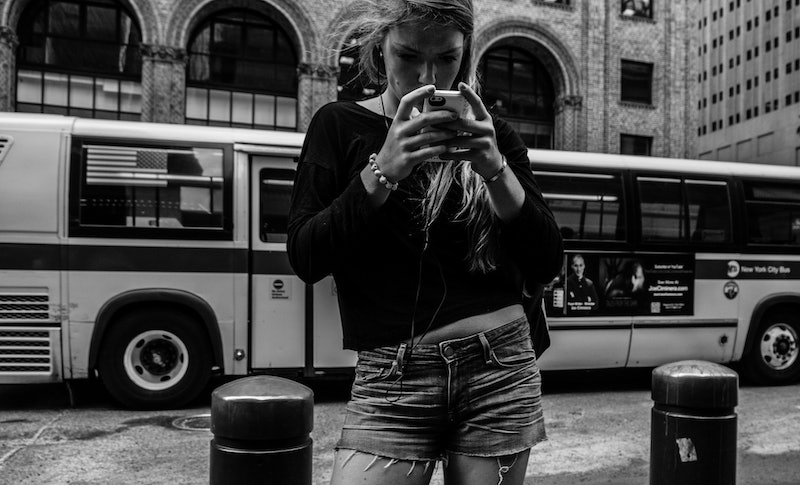 The dreaded premature sext: we’ve all been there. You just started talking to someone on Okcupid, his beard game is strong and you only have 12 percent chance of being an enemy. He appreciates your sense of humor, your unhealthy obsession with Girls and he’s even told you he has a love for Nev from Catfish , your forever Man Crush Monday. You’re thinking it’s just about time to meet up, then he hits you with it: the suggestive text riddled with winky faces and seductive sideways-glancing emojis. You have no reason to believe he’s a creep just yet but he’s entering into that territory.

Now of course, your response depends on what you’re feeling. Maybe you are completely picking up the sexiness he is putting down, and you’re ready to engage in a verbal lovers’ rendezvous. If that’s the case, do you girl, and sext him like he has never been sexted before. But if you’re uncomfortable and you feel it is positively too soon, there are several ways you can derail the conversation to let him know you’re not ready quite yet. If he’s smart, he will take the hint, and transition back into asking you your opinions on thin crust pizza.

So what exactly can you say to strike the balance between ‘I’m still interested’ and ‘keep your pants on’? Here are a few tips:

Maybe the guy wants to snuggle, or maybe we are in down-to-bone territory, but to be safe you may want to get yourself out of this potentially sticky (sorry) situation.

Tip: Suggest some activity for him to do. He’s all alone? Watch some Netflix. Call your mom. Contemplate the meaning of your life. Whatever it is, he’ll get the point that you’re not about to tell him the color of your panties. Chances are he will be a tad embarrassed he tested those waters prematurely.

Also Helpful: Suggest someone to keep him company, like a dog. Not only are dogs adorable, but you can now find out if he’s a dog or cat person, and that makes or breaks relationships. Real talk.

2. Steer the conversation in a less sexy direction.

Even though you don’t know what this mysterious dream about you entailed, you can most likely infer you guys weren’t crocheting a sweater together.

Your sweet, little grandmother. She makes the best cookies, she gives you money when it’s not your birthday, and she kills boners faster than her motorized scooter on turbospeed.

Tip: Slip Nana in when it’s plausible, and go on about that time she won $1,000 at a slot machine and spent it all on a crystal swan figurine (or something to that effect). Whatever you choose to do, he’s now thinking about his own grandmother, her unsightly facial stubble, and the guilt he suddenly feels over not having called her in six months.

It’s not an outright rejection and it’s the perfect way to say “I’m not getting sexy with you yet, so just take the time to learn my quirks instead.”

Tip: Let him down easily by suggesting you have alternate plans with yourself to channel your inner Celine Dion. Then ask him what his guilty pleasure song to sing in the shower is. Before you know it, you’ll be talking about that Spotify playlist you keep on private, and all will be right with the world.

Lacking in any sort of finesse or creativity, Mr. Smooth Operator is going straight for what he wants. You opened with your love of Instagram filters, he finished with asking for a five second picture of your good bits. Classy.

The classic penis reference: it comes in a variety of shapes and sizes (pun fully intended). Maybe he’s discussing the heavy equipment you may be handling in the near future, or perhaps he’s a bit more eloquent in his oversharing, and informs you that his nickname in college was the Human Tripod. Whatever colorful way he chooses to say it, chances are it’s downright uncomfortable.

Tip: There are a few. It’s possible he is insecure and felt the need to convey his masculine prowess in the least clever way possible. If that is the case, and you’re okay with it, laugh it off, inform him that the bowling alley carries some uncommonly large sizes and move on.

If it does make you uncomfortable, which makes complete sense at this point, feel free to call him out. Tell him the overt TMI is not appreciated, and quite frankly you are disappointed in his lack of originality. Or you can drop this dude like he’s a hot potato and move on completely. Why bother to deal with a guy who takes inopportune moments to tell you he’s an anatomical anomaly when he mostly likely isn’t? You have better things, and people, to do with your time.

Yep, he sent you a dick pic. There was no warning, no indication...and there it is, poorly lit and staring you right in the face.

This is a pretty easy call: Cut him off completely. Unless something about it looks charming to you in all its abruptness, there is no reason to stick around for this guy. He has done the visual equivalent of forcing himself on you, and there is nothing okay about that. Move on, and you will be all the better for it, trust me.

The premature sext always comes as a bit of a disappointment; he seemed so different, yet he’s already trying for some naked texting tango. You may like him, but do not let that sidetrack you from what you actually want. Always take yourself into consideration before him, and make moves the moment you are not happy. You’ll find someone else easily, and he will actually know the meaning of self control.