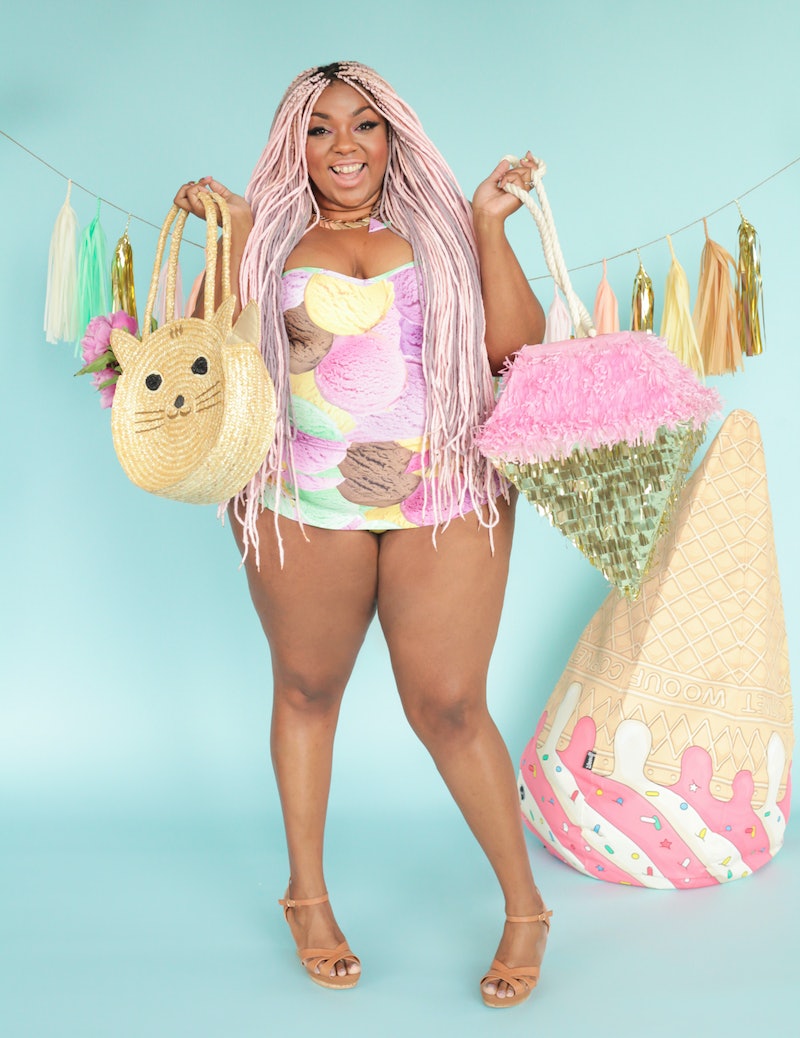 When I hear about body positivity being incorporated into fashion marketing, it's usually from an indie plus size brand or designer. Many of these smaller independent brands are advocates of the fat acceptance movement. But indie brands are not the only ones that know how to make a body positive statement.

Don't get me wrong: I belong in the indie designer category and our voices are definitely necessary. I believe that a lot of the changes happening in plus-size fashion started from those on the ground floor. But there is positive change happening at the top as well. When a company such as ModCloth — with more $100 million in revenue and a broad audience reach — preaches body positivity, people definitely take notice.

ModCloth is one of those mainstream retailers that seems to get it. I have a lot of respect for a multi-million dollar company that regularly incorporates body positivity into its branding, because there are certainly others with MC's influence who have yet to follow suit. While no brand is perfect, I am continually impressed by ModCloth. Here are just seven reasons why MC is totally badass and body positive.

As a designer, I've heard multiple times that models are supposed to be "aspirational" and I think that's BS. But luckily, I'm not the only one who thinks that way! ModCloth Co-Founder Susan Gregg Koger is an advocate for truth in advertising and inclusive marketing — centering the brand's marketing on being representative of its actual customers.

The brand set out on a year-long open casting call in September that encourages all people to share their #FashionTruth and it has been a game-changer. In a video discussing the campaign, Koger said, "I really believe in showing a wide range of bodies and creating advertising, creating marketing campaigns that's truly reflective of your customer base. I think that's something that you can do that's still aspirational and is still really inspiring but is also truly authentic and truly reflective of who your community is and who is actually wearing your designs."

According to ModCloth's website, the Style Gallery was created as a way for customers to show off their looks and inspire others. The emphasis of the Style Gallery is to show the intersection of fashion and daily life and demonstrate that these pieces of clothing don't just look good on the website models; they are wearable for everyone who buys them.

It's an empowering statement of the company's customer-focused marketing. You can follow users through the gallery and look at images via popularity "today," "this week," or "all time," which is how I discovered the gorgeous S L., pictured above. ModCloth even has a swimwear gallery right now that is all kinds of amazing.

3. Its Latest Lookbook With Amina Mucciolo Of Studio Mucci

It's not really a secret that Amina Mucciolo of Studio Mucci is a plus-size fashion rule breaker. And when I heard that she was partnering with ModCloth, I was beyond excited. The Modcloth lookbook was released on June 1 on Mucciolo's blog, The Tassel Fairy, and as expected, it was adorable.

Mucciolo described this lookbook on her blog as "your official summer guide to everything cute and inclusive." And the fact that "inclusive" is being prioritized right alongside "cute" is extremely refreshing to see.

4. The "All About Rye" Dress And The Transgender Model It's Named After

When I first saw that ModCloth made Rye Silverman its first transgender model and named a dress after her, I could hardly contain my excitement. ModCloth discovered Silverman through the Style Gallery on its website, where she was a regular contributor. And when Silverman was named the #FashionTruth Monthly Spotlight this April, she was interviewed for the blog about her comedy career and fashion journey. ModCloth also announced that it named an adorable vintage inspired dress after her.

5. Its No Photoshop Pledge

Last August, ModCloth took a stand against Photoshop when it became the first fashion company to sign the Brave Girls Alliance's "Heroes Pledge for Advertisers," which pushes for the legal regulation and transparency of Photoshopping tactics used in advertising.

The pledge asks that advertisers do not alter the shape, size, color, or proportions of their models, or to be truthful about any alternations that have been done. ModCloth's CMO Nancy Ramamurthi told Fashionista that the pledge fit perfectly with the company's philosophy, which has already used unaltered photos of non-professional models since 2002.

ModCloth wasn't really even on my radar as a plus-size retailer until I first started seeing the stunning lookbook photos of the Nicolette Mason x ModCloth collaboration collection that came out in October 2014. And though there have been a few blogger collab collections since from other brands, this one still stands out to me because the items were available across a more inclusive size range of XS-4X.

In an industry that still very much encourages segregation of clothing items as either straight-size or plus-size, this collection made a big statement about the fact that plus-size women don't just want more options, they deserve the same options given to our straight-size sisters.

I've often wondered about the company makeup of some of the major plus-size retailers. Mostly, do they have employees that actually represent the full range of customers that they sell to? And ModCloth put its money where its mouth is when it released a Style Story for its blog this February, which showed nine of its employees of all sizes in the site's most popular swimsuits.

ModCloth Co-Founder Koger, who was one of the women featured in the campaign, told Refinery 29, "If there's one message I'd like women to take from our campaign, it's that our bodies are diverse and that's a wonderful thing, not something to be ashamed of."