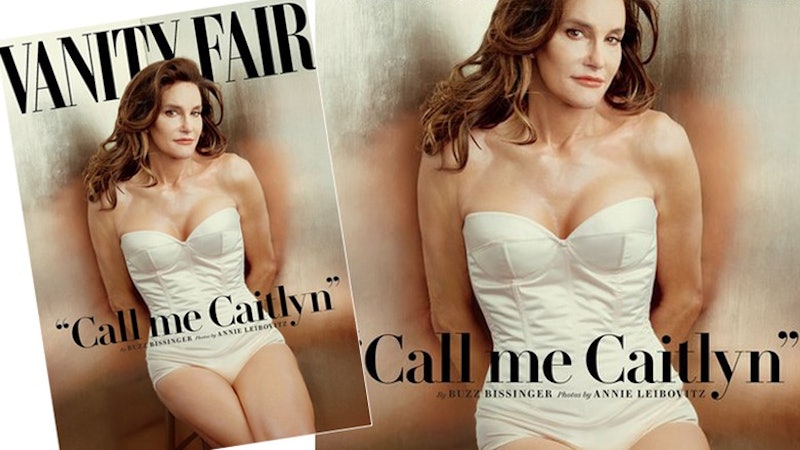 Yesterday, Caitlyn Jenner's debut as a transgender woman in Vanity Fair marked a huge step forward in acceptance for the trans community — but many members of this community still face ignorance, transphobia, and restricted access to necessary resources on a daily basis. As Laverne Cox wrote in reaction to both Jenner's Vanity Fair cover and her own TIME Magazine cover last year, "Most trans folks don’t have the privileges Caitlyn and I have now have. It is those trans folks we must continue to lift up, get them access to healthcare, jobs, housing, safe streets, safe schools and homes."

Sadly, because of our society's failure to accommodate them, the list of trans people who have committed suicide keeps growing. In addition to facing bullying and ostracism, transgender people are often denied basic survival needs like food and shelter. One in 10 trans people have been evicted from their homes because of their gender identity. Thankfully, many different organizations are working to advocate for trans people facing discrimination, let them know they're not alone, and educate cisgender people to be good allies. You can read a longer list on the Gay & Lesbian Alliance Against Defamation (GLAAD)'s website or The New York Times 's Transgender Resources page, but here are a few resources we should all know about — ways both for trans people to find help and support, and for allies to better help and support them.

The Trevor Project, an organization for LGBT suicide prevention, has a hotline called the Trevor Lifeline, a text line called TrevorText, and an online messaging service called TrevorChat for LGBT people who are struggling with suicidal thoughts or just need a safe place to talk.

The Trevor Project also created TrevorSpace, a platform for LGBT youth to connect, exchange ideas, and get support. It looks like some people have even found love on the site!

3. Skittlr, a social network for LGBT+ and MOGAI people

Skittlr gives LGBT+ and MOGAI (Marginalized Orientations, Gender identities, And Intersex) people a chance to discuss their experiences in a highly moderated community with endless options for how they can identify on the site — because, as the home page reads, "you're never the only one."

The Transgender Law Center's website provides legal information so trans people can know their rights, as well as a form that trans people or people advocating on their behalf can fill out to receive answers to questions like “I need information about how to change my name in California” or “I would like information about obtaining coverage for SRS under my Medicaid plan.”

5. The National Center for Transgender Equality

The National Center for Transgender Equality also provides information about legal rights and processes, like updating a driver's license and birth certificate, on its website. You might have heard of them back on April Fool's Day, when they jokingly announced that they were genetically engineering trans people who don't need to pee to stop all the debates over whether trans people should be able to use the bathrooms of their choice.

GLAAD points out that since only eight percent of Americans know a transgender person, many of us learn about trans people through the media, whose representations are not always accurate or positive. To answer people's basic questions about trans people, GLAAD put together an FAQ with questions like "What does transgender mean?" and "How is sexual orientation different from gender identity?" GLAAD also published a list of tips for trans allies.

If you see something in the media that depicts trans or other LGBT people in a negative light, GLAAD may be able to get in touch with the network or publication that produced it and educate them about how the group they're representing would prefer to be represented. You can also share incidents of discrimination you have experienced or witnessed for GLAAD to post on its website or share with the media.

The New York Times recently launched a series of editorials and videos telling personal stories of what it is like to be transgender today. The website provides a page for trans people to submit their writing and videos.

Hopefully, these resources can help trans people feel less alone and minimize the chances of cis people inadvertently contributing to this feeling.