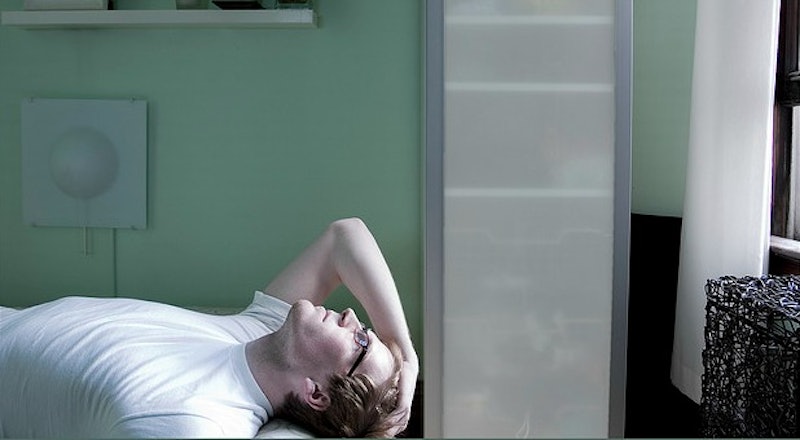 We’ve all heard of women faking it but did you know that men fake orgasms too? That’s right: men can fake orgasms just like women can. While it’s definitely a little harder to do because, well, there’s usually evidence of a male orgasm, it’s by no means impossible nor is it terribly difficult. According to one study conducted by the University of Kansas in 2010, 25 percent of the 180 men surveyed admitted to faking an orgasm. The same study suggested that both men and women faked orgasms for the same reasons: not wanting to upset their partner, wanting to please their partner, wanting sex to end, and thinking that “orgasm was unlikely.”

Wanting to do some research of my own, I did what I always do in these situations: grilled my boyfriend. After pinning him on the bed and gyrating my hips around while singing Salt-N-Pepa songs (what, that’s not what you do on a workday afternoon?), I blurted, “Have you ever faked an orgasm?”

Accustomed to my non sequiturs, he told me that yeah, he had — but not with me. I asked him how and he said, “It’s not that fucking hard, is it? You just build up the pace and make some groaning sounds and shudder a bit.”

Seems about the same as women faking it, doesn’t it? However, that lack of ejaculate is still obviously an issue for the dudes amongst us, so I expanded my highly scientific search to include some articles from around the interwebs where guys talked about how, exactly, they're faking it with their loves. Here’s what I’ve discovered.

So…this is kind of gross? Apparently if you’re doing it from behind, the trick is to pull out and spit on the girl’s back, and then wipe it off quickly before she realizes it’s not the bodily fluid she thought it was. I don’t know why the thought of spit is grosser than the though of come but… it just is. Maybe it’s the degradation that’s implicit in spitting on someone? I mean, if you’re into that than go for it but if you’re not, getting spit on is not so nice.

Just whip it off real quick! Rush off to the bathroom and flush it before your partner notices! JK, those things can totally block the toilet; you should really wrap it in tissue and put it in the bin. Seriously though, how many people actually check the condom to see if there’s come in it? According to AskMen, this is key to the male faked orgasm.

Some guys throw some noises and grunting and thrusting in there — but nothing too over the top. If they're usually a moaner and they just like, stop, their partner is going to notice.

4. Doing it any way but missionary.

Apparently it’s not too hard to fake the thrusting and moaning but faking an “O” face is damn near impossible. Seriously. Try it for a second. I bet you can’t do it, right? That’s why it’s recommended that guys avoid the missionary position if they're going to be attempting a faked orgasm. If your partner can see your face, they’ll probably know what’s up.

And of course, here’s the ultimate advice when it comes to faking an orgasm: Don’t do it. Try talking with your partner about sex and what you need to come next time if you want to have an awesome sex life. Trust me; it’s worth it.

More like this
The Best Time To Date After A Breakup, According To Experts
By Bustle Editors
The Top Mistakes Scorpios Make In Relationships (& How To Avoid Them)
By Nina Kahn
We’ve All Had Bad Sex. Nona Willis Aronowitz Is Talking About It.
By Sophia Benoit
7 Women Share Their Best Orgasm Stories
By Lexi Inks
Get Even More From Bustle — Sign Up For The Newsletter