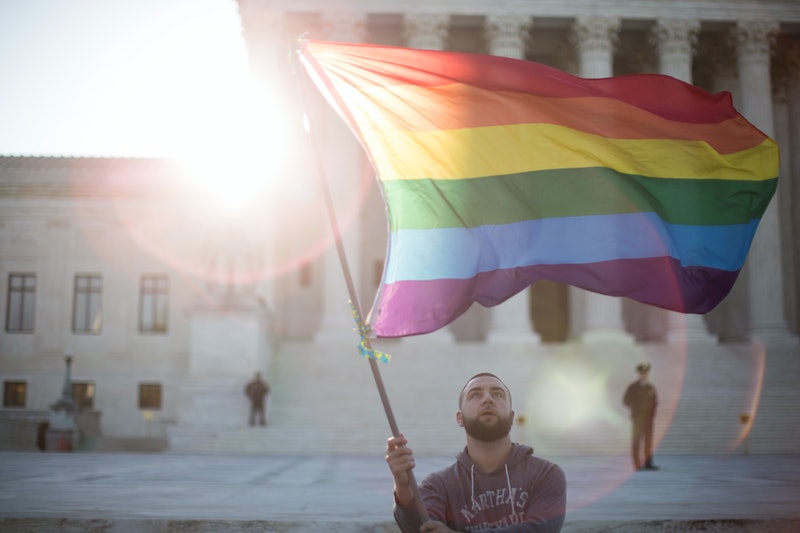 The fight for legalizing gay marriage has been a long road, and there have been plenty of battles along the way — California Prop 8, I still feel you. But what makes the Supreme Court's landmark decision to make gay marriage legal in all 50 states so historic is how it creates a nationwide declaration that marriage is a constitutional right for all Americans, regardless of their sexual orientation. Whatever your sexual identity, that is definitely cause for celebration, and this ruling can only mean good things for your life. And President Obama agrees.

On Friday, he tweeted: “Today is a big step in our march toward equality. Gay and lesbian couples now have the right to marry, just like anyone else. #LoveWins." He followed that up with a passionate speech from the Rose Garden on what marriage equality means for our nation's past, present, and future. Hillary Clinton is thrilled, as well, with SCOTUS' decision, tweeting, "Proud to celebrate a historic victory for marriage equality — & the courage & determination of LGBT Americans who made it possible. — H."

And Obama and Clinton are going to lead better lives because they support marriage equality. Being pro-equal rights is good for you! Here are six reasons why.

Yeah, yeah, this might sound super cliché, but there's a reason why people who do good feel good. A University of Louisville in Kentucky study found that people who engaged in meaningful activities, such as helping others, were happier and felt more purposeful in their life. Gay marriage is a good cause, and that'll make everyone, including yourself, feel good.

Surrounding Yourself With Happy People Will Make You Happy

A study from the University of New Hampshire found that your social networks greatly affect your happiness levels. If you surround yourself with a bunch of Debbie Downers and Negative Nancys, you're likely to become one, too. But happiness is infectious, and if you're surrounded by LGBT folks and gay rights advocates' celebrating the good news, that positivity will come back into your life.

One of the biggest arguments for gay marriage is to grant spousal and family privileges to everyone, regardless of their sexual orientation. Whether you're the child of a gay couple or the parent of one, health and life insurance, tax breaks, and Social Security benefits are crucial in providing security to their lives and your own.

A 2004 report from the Congressional Budget Office said legalizing gay marriage could bring in hundreds of millions of dollars in federal tax revenue each year. For states, that kind of money could make a huge difference for their economies. In 2012, New York's economy saw a $259 million boost after gay marriage was legalized a year earlier.

You'll Be Invited To Some More Weddings

The new legalization of same-sex marriages in all 50 states means there's a lot of celebrating to do for the couple, and our country. Get on your party clothes and cheers to that!

You'll Become A Role Model For The Next Generation

Imagine the stories you'll tell your kids about where you were when this landmark decision happened. Did you pop champagne? Dance in the streets? Get lucky? Hopefully, the historic ruling today will inspire the next generation of social activists to take up a righteous cause and make more positive changes in their lifetime, as well.