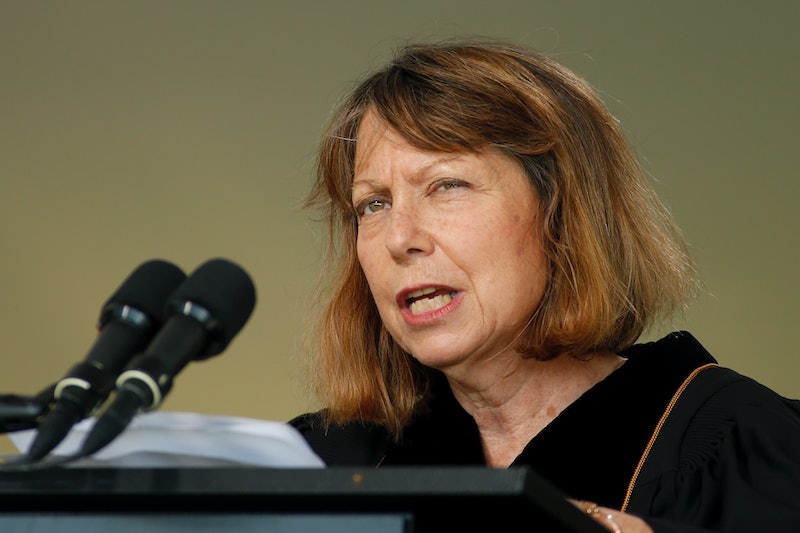 The Women's Media Center just released its report The Status of Women in the U.S. Media 2015 , which shares facts and figures from the past few years about gender in journalism, TV, film, radio, gaming, and more. The report's key takeaway, which we kind of already knew, is that all of these industries suffer from gender inequality. Women and people of color remain underrepresented not only within the media industry but also in the stories that the industry produces.

One of the report's areas of investigation that I've been thinking about lately is the so-called "byline gap" — i.e., the predominance of men in the bylines of major publications. According to the Women's Media Center report, women constitute the bylines of 37 percent of print articles and 42 percent of online articles. While writing is considered a more "feminine" pursuit than science or technology, I became aware of the subtle ways gender still gets in the way of women's writing aspirations at BinderCon, a conference for women and gender-nonconforming writers. Editors in attendance at this year's conference revealed that they see men more often follow up on pitches — something I'm working on myself because I always feel like I'm imposing on editors. Many women feel like they're imposing when they send pitches, negotiate rates, reach out to sources, or promote their work. I even heard a woman say she was afraid that submitting a finished article before she had a pitch accepted would seem presumptuous.

This fear of being presumptuous or imposing, along with both covert and overt sexism on the part of the industry's leaders, leads to gender gaps across the board in the media industry. To delve a little deeper, here are some interesting pieces of information from the report; you can check out the full thing at the Women's Media Center website.

When a movie's writers and directors are all men, women make up a meager four percent of protagonists. However, add at least one woman writer or director, and that number skyrockets to 39 percent. (Bridesmaids, written by Kristen Wiig and Annie Mumolo, was considered remarkable for featuring woman as almost all of its main characters.) This means that, while women are writing from men's perspectives 61 percent of the time, men are only writing from women's four percent of the time. That's a huge imbalance in who men and women are forced to empathize with and who they teach audiences to empathize with. Writer, producer, and director Gina Prince-Bythewood said in her BinderCon keynote that the biggest obstacle to her film career was not being a black woman, but rather wanting to make movies about black women.

2. Journalism grads of color are less likely to find jobs.

To add insult to injury, they became even less likely between 2012 (when 60.3 percent found full-time jobs) and 2013 (when only 55.1 percent did), according to a University of Georgia survey cited in the report. White grads did not see such a decline, with 72.8 percent in 2013 and 72.7 percent in 2012 finding jobs in fields like publishing, radio, television, and public relations. This was the one area where women fared slightly better than men, with 70.4 percent of women and 65.9 percent of men finding jobs in 2013 (but women make less money, so...).

3. 25 percent of women have been sexually harassed online.

In my non-expert opinion, that number's about 100 percent for women who have A) used an online dating site or B) published something in a large media outlet. Social media is also a popular outlet for trolls, though. One woman even posed as a man on Twitter in order to stop getting rape threats and fat-shaming insults. Another 26 percent of women have been stalked online, according to a Pew Research report. The number of victims of other forms of online harassment was surprisingly similar for men and women, suggesting that trolls don't discriminate but tailor their trolling to their targets based on gender.

48 percent of gamers were women, so only a small percentage of women's game purchases are for men. The fact that about half of gamers are women makes movements like #GamerGate to kick women out of gaming communities even more crazy — and games about saving damsels in distress even more irrelevant.

5. The percentage of women in computer and mathematical occupations dropped between 1990 and 2013.

According to an American Association of University Women survey, the proportion of women in these professions declined from 35 percent in 1990 to 26 percent in 2013. The Women's Media Center report doesn't speculate on the reasons behind this drop, but a story from NPR last year theorized that the decline of women in computer science coincided with the rise of personal computers, which were marketed heavily toward men. In the 90s, families were more likely to buy computers for boys than girls. And voila, several decades later, we now have men dominating the tech industry. Nice job, gendered marketing.

More like this
Beyoncé & Madonna’s “Break My Soul” Remix Honors A Group Of Black Icons
By Stephanie Topacio Long
22 Movies On Netflix That Are Perfect For The Whole Family
By Bustle Editors
Your Daily Horoscope August 11, 2022
By Mecca Woods
How To Use Instagram Story Highlights So Everyone Sees Your Fave Stories
By Brandi Neal and Emma Carey
Get Even More From Bustle — Sign Up For The Newsletter