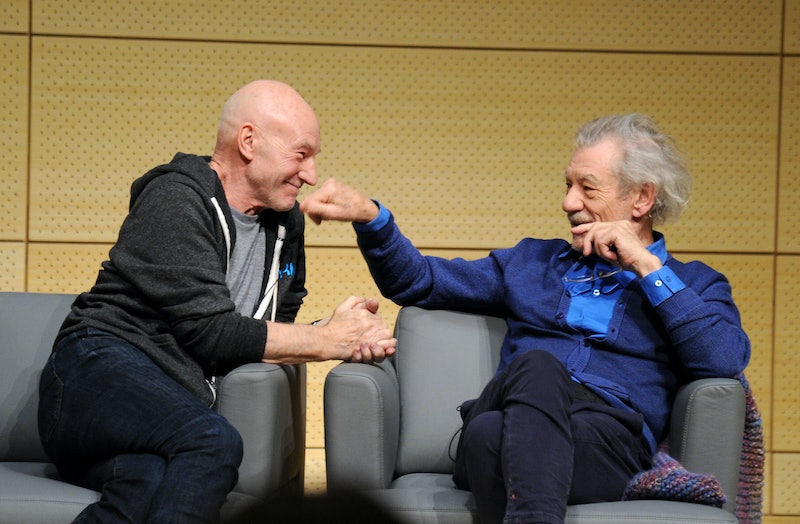 Have you ever seen anything as beautiful as the friendship between Sir Ian McKellen and Sir Patrick Stewart? There's only one correct answer here, and that answer is: "No, of course not, their unadulterated love for one another is the purest thing on this entire godforsaken planet." The two British knights have showcased their adorable bromance many times throughout the years, whether through appearing onscreen together in the X-Men franchise, appearing onstage together in Waiting For Godot on Broadway, taking hand-holding pictures while touring New York City, officiating each other's weddings, going to Super Bowl viewing parties, or playing the Newlywed Game — and winning. Now McKellen & Stewart have kissed on the red carpet, and it's probably their most beautiful moment yet.

At the premiere of McKellen's new film, Mr. Holmes — in which he plays an aging Sherlock, the best casting decision in the history of casting decisions — the two besties were publicly reunited for the first time since their run on the Great White Way ended last year. Their reconnection was a joyous occasion, as the two wasted no time in locking lips in broad daylight, not a care in the world. Check it out:

There's a lot we can learn from McKellen & Stewart about how to be a good friend... but, for the moment, I'm too busy feeling approximately all of the feels to really absorb the finer life lessons here. If you're as enamored of this bromance as I am (and why wouldn't you be?), then here are some things you're probably feeling right about now:

...by the mere fact that these two human beings are once more occupying the same physical space.

...by the sheer flawlessness of their bromance.

...due to the knowledge that you'll never have a love as true as theirs.

...by the fact that no one has made a buddy comedy starring these two besties yet.

...by the disembodied teeth you just noticed are photobombing the otherwise perfect picture. (For the record, that smile belongs to Stewart's wife, Sunny Ozell, aka The Greatest Person On Earth.)

...this time by a desire to get in on the adorable lovefest.

...of the fact that they so generously allowed you to witness their perfection.

...due to the combination of all the above emotions happening at the exact same time.