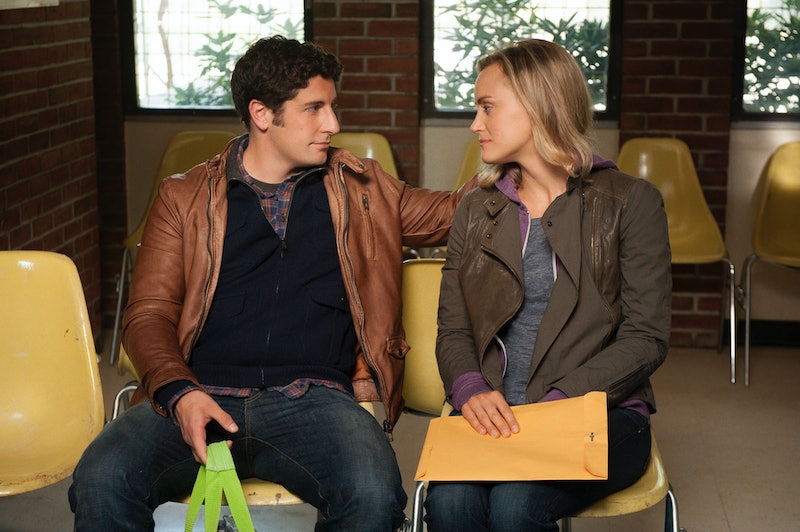 After the surprise early release of Orange Is the New Black Season 3, fans are majorly abuzz with thoughts about Litchfield and all of the insane plot twists that the 13 hour-long episodes included. Though one might think it wouldn't be possible for a person to marathon all 13 episodes in one sitting, marathon fans did — proving that when it comes to OITNB, anything is possible. The third season was released late Thursday night on Netflix, and, by the wee hours of Friday morning, the Wikipedia page had been updated, articles had been written, and speculation about Season 4 had already begun. One thing people couldn’t help but talk about: where was Larry? A few months ago, it came out that Jason Biggs’ character, Larry Bloom, would not be returning for OITNB Season 3 — but after the premiere of Season 3, fans have been left curious about what happened to Larry Smith in real life, aka the man who Biggs' Larry is based on. Did he and the real Piper Kerman — whom OITNB's Piper Chapman is based on — actually break up?

Luckily, the answer to the latter question is actually pretty simple: No, they didn't. Turns out, the decision to ax Larry Bloom from Season 3 had nothing to do with the real Smith's relationship with Kerman, and everything to do with the direction the writers were taking the plot. Because the plot of show has been wildly veering away from the events described in Kerman's memoir (which the show is loosely based on), storylines are no longer mirroring the events that took place in Kerman's actual life — so even though Kerman and Smith are actually still together (and married!), the only reason the fictional Larry was written out of the show was creative direction. As Biggs stated when news of Larry not being included in Season 3 broke, "They’re not focusing on Larry at the moment...Larry will not be in Season 3. But there’s always a possibility he can come back."

So, for those of you who can’t stand Larry for falling for Polly or for getting in the way of Alex and Piper’s relationship, good news: none of that actually happened IRL. True life, as it turns out, is way more boring than television.

So what did happen to Smith and Kerman, you ask? Well, I can tell you one thing: it didn’t involve an in-prison lesbian love affair between Kerman and her ex-girlfriend, that’s for sure. (Sorry.) And I’ll tell you another thing that, if you are not a fan of Larry on the show, is probably not going to make you very happy: Smith is way cooler than Larry Bloom, and, unlike Larry Bloom and Piper Chapman, Smith and Kerman are still together. In fact, a year after she was released from prison, Kerman and Smith got married.

Since then, Smith and Kerman have been living in Columbus, Ohio. And while Kerman spends her time speaking out about better prison conditions and teaching writing at — GET THIS — a couple of women’s correctional facilities in the area (!!!), the real-life Smith is the creator of the best-selling book series Six-Word Memoirs . You know, those books you see in the impulse section of every bookstore in America? Yep. He’s that guy! Additionally, in an essay he wrote for Medium, Smith refers to himself as “a parent,” so you know there is at least one little Smith-Kerman offspring running around somewhere in the Midwest.

In the meantime, Smith continues to write openly about his life, run the storytelling magazine SMITH, interview actors from the television series, and talk about how he is coping with his life after being turned into TV fodder. And from the sounds of it, he’s doing that just fine.