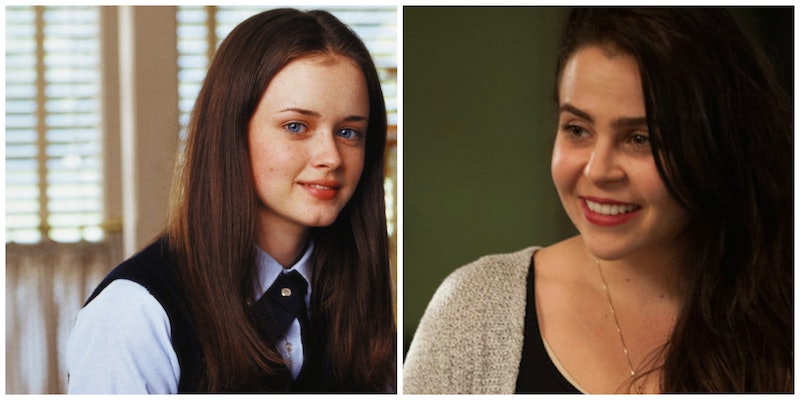 Lauren Graham and her TV daughters Alexis Bledel ( Gilmore Girls ' Rory) and Mae Whitman ( Parenthood 's Amber) nearly broke the Internet when they posed for pictures together at the ATX Festival earlier this month. Graham, who played Lorelai Gilmore on Gilmore Girls and Sarah Braverman on Parenthood, is a unique actress in the sense that, over the course of her career, she'd participated in not one, but two fictional mother/daughter relationships on television that a massive amount of fans adored. However, despite both featuring Graham as one-half, the relationships were strikingly different from one another: While Rory and Lorelai were best friends right from the start of Gilmore Girls, Amber and Sarah's relationship got off to a bumpy start on Parenthood before eventually becoming more stable as Amber grew up. The chemistry between Graham and her TV daughters was always undeniable though, which is why seeing all three of them together was such a treat. The picture also made me wonder if, as different as Rory and Amber were, they had anything in common.

For instance: Rory was the quintessential "good girl" for much of Gilmore Girls' run, but let's be real — she made her fair share of questionable choices. On the other hand, Amber carried around the "bad girl" label early on (really, she was just a complicated teen), but she ultimately grew into a responsible adult who held a strong bond with her mom. Though they may seem it, I don't think Rory and Amber were ever polar opposites — in fact, I think they shared a lot more in common than a fast-talking, single mom.

1. They Both Had Absentee Fathers

Christopher and Seth were never there for their daughters, leaving both Rory and Amber having to lean on their mothers and extended families for emotional support. While both men tried to be fathers to their daughters eventually, it was too little, too late to matter. Neither Rory nor Amber was too happy about the prospect of their parents reuniting, either, as they both feared what revisiting the relationships would do to their moms.

2. They Had Special Relationships With Their Grandfathers

Amber's grandfather Zeek was the most reliable and valuable male influence that Amber had in her life. They formed a special bond when Sarah moved her kids back home, and Zeek was able to get through to Amber when no one else could. Likewise, from the moment Richard and Rory bonded during their golfing trip in Season 1, Richard realized he loved his granddaughter more than anything in the world, and vice versa.

3. They Both Had To Deal With Their Moms Falling For Their English Teachers

In a weird turn of events, both Sarah and Lorelai dated (and nearly married) their daughter's English teacher. The situation understandably weirded both Amber and Rory out — Rory because it caused trouble for her at school, and Amber because she had an epic crush on Mr. Cyr.

4. They Were Involved In Scary Car Crashes

During their teen years, Amber and Rory both ended up in car crashes that completely freaked out their mothers. In Amber's case, the crash was the culmination of two season's worth of building angst. Rory's, on the other hand, was a total accident, but it still resulted in major fallout since Lorelai blamed Jess, which led to some rebellious behavior from Rory.

5. They Fell For Troubled Guys

Amber and Rory had a soft spot for troubled guys, particularly ones named Ryan and Jess, respectively. As much as they loved the men in their lives, they had to eventually admit that the troubled men had to pull themselves together too much for relationships to work out.

6. Their Cry Faces Were Soul Killers

When Amber and Rory cried, the whole world cried.

7. They Both Went Through A Rebellious Phase

For Amber, her rebellious phase came during her teen years. There was copious amounts of sneaking out, fighting with her mother, drinking, and even light drug use. Ultimately, she matured though and formed a sold relationship with her mom as she few up. Alternatively, A=a few road bumps aside, Rory's teen years were largely uncomplicated and Lorelai was always by her side — but when Rory went to college, she suddenly found her inner rebel. Her relationship with her mom was put to the test, but, of course, they still came out on the other side still best friends.

8. They Were Both The Center Of Their Mother's World

The most valuable thing Amber and Rory shared was the love of their mothers. No matter what they were going through, or how frustrated they were with their lives, Sarah and Lorelai were always there to champion them on — and at the end of the day, their best friend was always their mom.