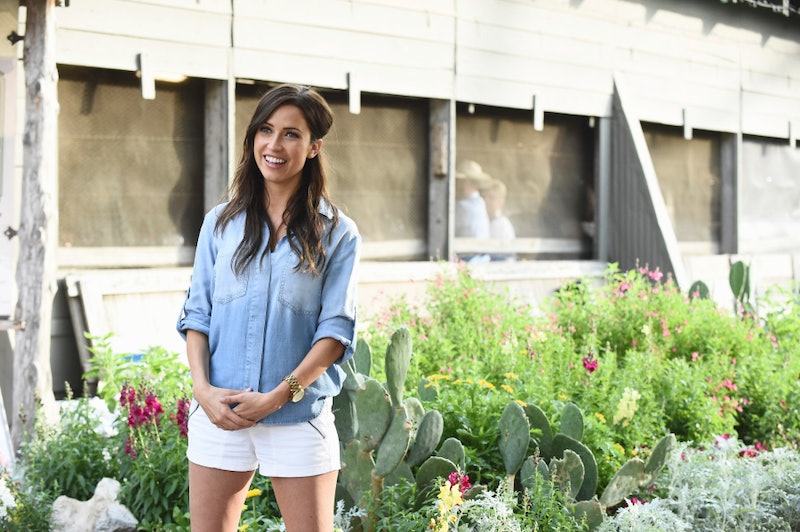 I'll admit it: Before this season of The Bachelorette started, I was a huge critic of the two Bachelorettes idea. Did the producers seriously just have Kaitlyn Bristowe and Britt Nilsson fight to the death (OK, not literally) over Chris Soules on The Bachelor just to pit them against each other again for ratings? It seemed unfair, and maybe it was, but now that the season's in full swing, it might be my favorite Bachelorette season in recent history. Not only did Britt manage to find love with Brady after she wasn't voted in, but Kaitlyn, the chosen Bachelorette, does whatever she wants despite the precedents set by the Bachelorettes who came before her. There's no question about it: Kaitlyn is one of the most feminist Bachelorettes ever.

Being that the entire Bachelor franchise is incredibly easy to criticize from a feminist perspective, I get a lot of flack from my friends for watching it (as I do for a lot of my reality TV choices). I understand where they're coming from — the concept of the show alone, competing against other women for a man and/or the opportunity to choose from 25 men yourself, seems super sexist to the uninitiated. But, after Kaitlyn's season, I may not have to defend it so much. Yes, you absolutely can be a feminist and a Bachelorette fan, and, thanks to Kaitlyn, it's that much easier to prove it.

1. She Doesn't Play By The Rules

In fact, she hasn't played by the rules since that first night that she snuck away to see the guys during limo arrivals, and I don't think she's going to start anytime soon, especially now that she let Nick Viall join the show midseason.

2. She Kisses As Much As She Wants

For this one, I'll let Kaitlyn do the talking, since she did so very eloquently in one of her most recent People blogs:

Let's end this week's blog with a little discussion about kissing. Yes, I kissed a lot of guys. I was trying to compartmentalize these different relationships, and I was just dating these guys how I ordinarily would. And, if I'm dating someone and I like them, I kiss them. It's challenging to be in my position, asking everyone to understand my decisions, my mistakes and my journey. Everyone is different, and I would rather be disliked for who I am than liked for who I am not. It is too exhausting to try and make everyone happy or pretend. I hope everyone can understand that and try to be forgiving as they watch how all of this unfolds.

3. She Refuses To Be Slut-Shamed

When people started to call Kaitlyn names after the preview showed she had sex outside the Fantasy Suite, Kaitlyn stood up for her decision. "It's 2015. How is this still an issue where if a woman [has sex], it's wrong, and if a man does, it's right? To me, it wasn't some crazy negative thing I was doing," she told People magazine. "If people [have sex] on dates, why is it so wrong to do it when I'm looking for a husband? That's a decision I made. And I don't think we should be judging each other for it." Preach.

4. She Doesn't Let People Walk All Over Her

Anytime there has been a hint that anyone might even thinking about being anything but genuine to her, she kicks them to the curb. And why shouldn't she? She's a beautiful, funny, headstrong woman, and the guy who ends up with her should feel lucky she chose him. She is not here to pander to the egos of her men. (I'm talking to you, Ian.)

5. She Puts Herself First

Whenever the guys criticize her — something they do a lot this season — her response is always the same: This isn't about them, although she would never hurt them on purpose. It's about her and her quest for finding love. The decision she makes in the end is going to be one she has to live with for the rest of her life, so she's not going to let anyone dictate her choices but her — and that's definitely one of my favorite things about her. #TeamKaitlyn forever!