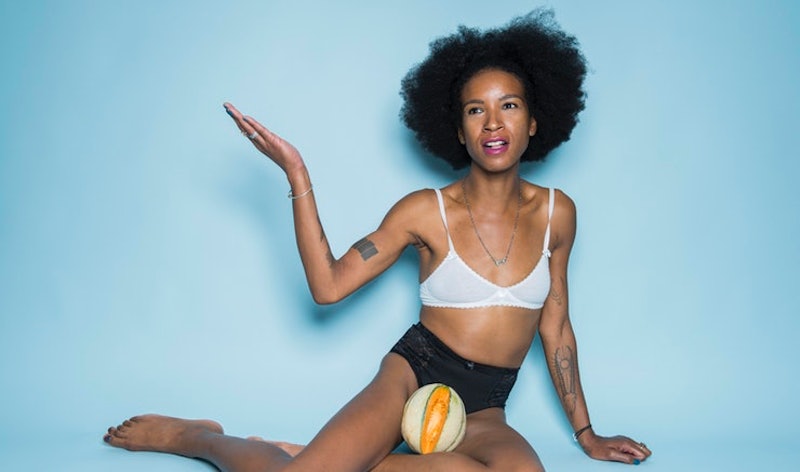 If you were raised to believe sex would make your vagina "loose," I'm sorry to inform you that you've been fed sexist BS. The truth is that sex doesn't make your vagina any wider or less strong. But there are some other fascinating ways the type and amount of sexual activity you engage in can change your vagina and vulva.

First, though, since it's so insidious, let's debunk that "loose" myth. The only thing that can actually stretch out your vagina is physical trauma, sex researcher Nicole Prause, Ph.D. tells Bustle. The most common form is childbirth, but even then, you can tighten the muscles through kegel exercises.

"The vagina generally is very spongy and supported by a variety of muscles and ligaments that maintain its shape," says Prause. "There is no evidence that sex alone, even frequent sex (or with different partners), causes the vagina to loosen. The 'loose' woman is expression only." And it's a sexist one at that. Calling women "loose" or claiming that virgins are better partners is just a way to shame women for having sex.

So, how does sex actually affect the vagina, then? Here are a few ways it could.

"Lady boners" isn't just a figure of speech. "The clitoris engorges just like the vaginal walls," says Prause. "One study found the volume of the clitoris increased up to 126 percent during a short sexual stimulation in the lab."

Like the penis foreskin, the clitoral hood may also retract when you're aroused, leaving the clitoris bigger and more visible. Your vagina also doubles in length due to increased blood flow, Vanessa Marin, sex therapist and creator of Finishing School, an online orgasm course for women, tells Bustle.

2. Your Clitoral Hood Can Change Shape

3. Your Vagina Can Get Stronger

If anything, sex can actually make your vagina tighter. "The vagina is a muscle," Astroglide's resident ob-gyn Dr. Angela Jones tells Bustle. "When you exercise a muscle, it’s stronger, has more blood flow, [and] is more sensitive. Exercise allows enhanced performance; the same goes for vaginas." Sex won't provide too much by way of exercise, though. Kegel balls are more useful for that. And you likely won't see any change in your vagina's appearance the way lifting weights could bulk up your arms, says Marin.

4. You Can Get More Sensitive

"Sexual arousal can involve neural growth," says Queen. This means that after your clitoris or vagina receives a lot of attention, it could actually become more responsive. You can also experience more sensation during sex by practicing mindfulness. The biggest changes your vagina undergoes during sex are in sensation, not appearance, Queen says, so your partner may not notice, but you might.

All that said, it's possible not all these changes will happen for you after sex. "Everybody’s anatomy is a little different, so it’s not possible to say conclusively what would or would not result in anatomical change for a person," says Queen. In general, though, unless you contract an STI, sex can't have many negative impacts on your body. But it certainly does have lots of benefits.