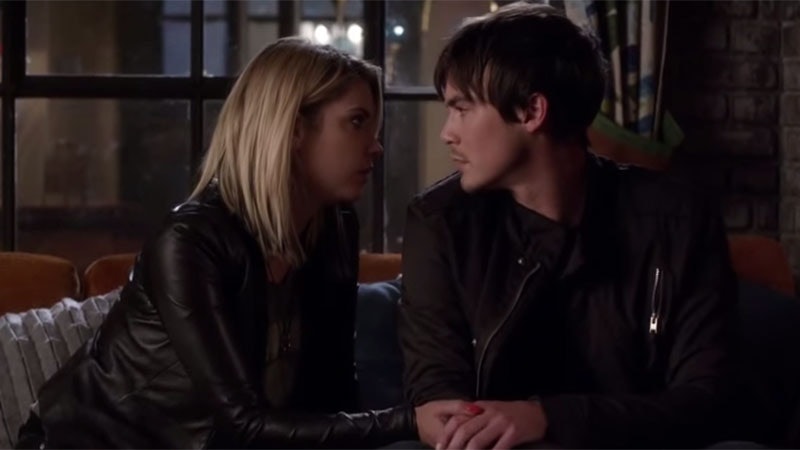 Over the past few years, Pretty Little Liars has provided viewers with never-ending plot lines, more cliffhangers than anyone ever thought possible and, of course, friendship goals. In between figuring out that "A" was Charlotte DiLaurentis this whole time and trying to get the details on who uber "A" is, the Liars have also been part of some pretty stellar romantic relationships.

From the first episode, we're introduced to Ezra and Aria's complicated, sometimes questionable relationship (no apologies — his book-writing motives were sketch). As the episodes ticked on, we saw Emily and Maya get together only to tragically be pulled apart. (Thankfully, Paige came onto the scene and gave us an entirely new Emily-centric couple to follow!) Hanna fell in love with bad-boy-turned-awesome-boyfriend Caleb, while Spencer and Toby stole our hearts.

Needless to say, I'm almost — almost — as excited to see who's endgame as I am to finally learn who uber "A" is and why he (or she) has a beef with the Liars. While fans are still a ways away from either of those reveals, we can debate the relationships. In particular, which Liars have the most amazing pairings, a topic frequently discussed on Bustle's PLL podcast, Taking This One To The Grave .

Without further ado, I present the definitive ranking of every Pretty Little Liars couple:

Waaaaay back at the start of Season 1, Emily dated Ben. Unfortunately, he turned out to be terrible. (Remember when he attacked her in the locker room?) Bye, Ben.

Shower Harvey is as sketchy as they come

Remember when Hanna's dad informed her that he was paying for her stepsister's college education instead of hers? Sorry, Mr. Marin. Zero badass points for you.

This relationship was just too weird. Sorry Mrs. Marin.

Besides being the same cliché as Aria's relationship (sorry, Ezria shippers), these two were just not a good pair.

Remember when everyone thought Byron was A? Anyway, he snuck around behind Ella's back and that is not okay.

Ugh, this one is a toughie. One hand, Wilden was creeping around the girl. On the other hand, Ashley, being the best PLL mom ever, dated him to keep Hanna safe.

I liked Ella in cougar mode. Too bad Zack turned out to be the absolute worst.

Before Andrew maybe kidnapped the Liars, he was really into Aria. It's a shame that she was still totally in love with Ezra.

These two were full of secrets.

Remember that Spencer's original lie was that she kissed Ian? Of course, he was with Melissa at the time — and we all know how that storyline ended.

Hanna had a brief fling with Wren, which mostly involved a quick kiss and some medical treatment for her leg.

These two were cute, but let's be honest: They weren't too memorable as couple. (Although, in Rosewood, uneventful seems to be a rare treat.)

Can you imagine if these two would have dated long-term? Anyway, they were cute while they lasted, but as we eventually learned, Noel is very suspicious.

Even though this couple was together before the show started, Maggie's relationship-shaking appearance makes them worthy of the list. Points to Ezra for stepping up when she arrived with his alleged child. No points for her sketchiness.

He was definitely way more into her than she was into him, but he was a nice break from Ezra. (Sorry again, Ezria fans.)

Spencer's parents were not into her Romeo and Juliet-esque affair, but these two were cute while they lasted.

I know Spaleb might be happy together in this ~brave new world~ we're calling Pretty Little Liars Season 6B, but everyone knows Hanna and Caleb belong together.

AND I know that Aria and Liam might be having fun, but everyone knows Ezra and Aria are totally endgame.

Hanna engaged to someone who isn't Caleb? WHY IS ANY OF THIS HAPPENING?!

Although I can't shake the feeling that Dr. Rollins is totally sketch, so far, he and Ali seem fine together.

There's no denying that these two had chemistry. Unfortunately, Wren was with Spencer's sister first. and EW.

Emily's parents get major points for having to be separated due to his job and still being a model couple.

A true PLL power couple, if ever there was one.

They couldn’t make things work out, but they sure looked good together while it lasted!

OK, so most of their relationship was for show, but these two were genuinely cute together. Not to mention, they always had each others' backs.

Things didn't work out for these two, but Sean was still a pretty decent guy. Also, Hanna found Caleb, so it's safe to say that things worked out for the best.

Only the best for Ashley Marin.

We all mourned when Caleb went to Ravenswood. Hanna passed the time by dating good-guy Travis — although they ultimately parted ways.

They didn't officially couple up, but their strip study session earns them a spot in the rankings.

This brief, complicated coupling gets a mid-level ranking because, half the time, Alison was manipulating Emily.

Rosewood's two shadiest teens are perfect for each other.

Aria sticking by Ezra's side when his ex showed up with a child she claimed to be his (but wasn't, in the end) is proof that these guys are endgame.

All of the bonus points to this couple for having the good sense to flee Rosewood and the United States.

Mona and Mike faced more tragedy and upheaval than the average high school lovebirds, but they're kind of unexpectedly perfect together.

Overlooking the fact that Paige once tried to drown Emily, these two are ridiculously cute. Paige, come back to us!

Toby became a cop to protect Spencer. Also, he totally holds his own in a Scrabble game against her, which says a lot.

Even before Ashley Marin's seal of approval, there was no doubt in my mind that Haleb is PLL 's ultimate OTP.

Who else wants a rewatch right about now?