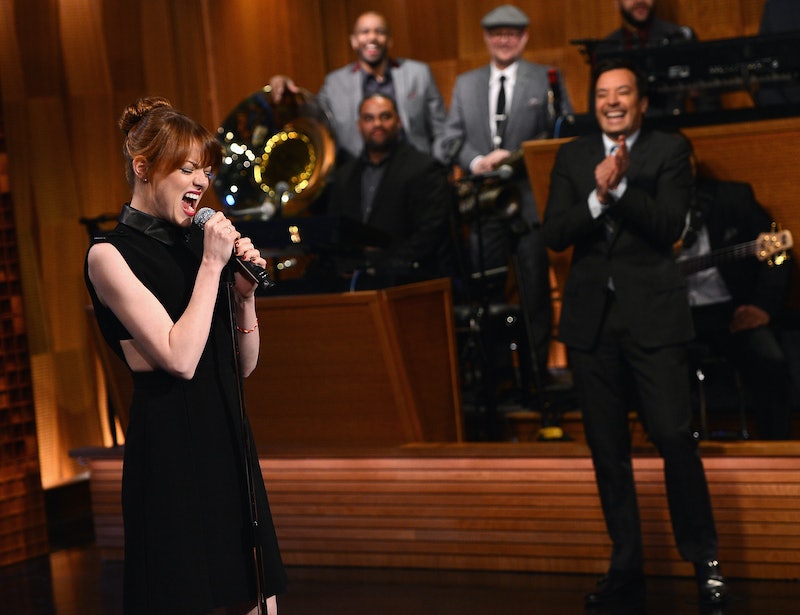 I've always considered karaoke to be one of my favorite pastimes. That being said, there are limitations on the songs I choose based on things like vocal range and number of beverages consumed. We all would love to belt out a Christina Aguilera hit from time to time, but we also need to protect our delicate vocal chords from sudden destruction. This is where the beauty known as lip syncing comes in. All you need to know is the lyrics to your favorite song (or be really good at faking it) and you can mock sing your way to imagined stardom. If the Lip Sync Battles showcased on The Tonight Show Starring Jimmy Fallon — as well as Spike's celebrity-packed Lip Sync Battle — have taught us anything, it's that you don't need to use your voice to cover a hot jam. Moreover, without the pressure of hitting those high (and low) notes, you can even throw some killer choreography and theatrics into your lip syncing session, just as Anne Hathaway did during her uproarious rendition of "Wrecking Ball" by Miley Cyrus.

Whether you want to show off your lip syncing skills at a party, or simply want to privately rock out to your favorite ballad without the threat of waking up your roommates, here are 11 of the best songs to lip sync to.

"Ain't No Other Man" — Christina Aguilera

Let's face it: Christina Aguilera can hit a lot of notes. There's no need to worry about range in lip syncing, however, so mock belt the heck out of this jazzy tune from 2006.

If we've learned anything from Emma Stone's epic Lip Sync Battle on The Tonight Show Starring Jimmy Fallon, its that this song by Blues Traveler is a definite go-to for lip syncing fun.

You can channel your inner scorned lover when lip syncing "Blank Space" by Taylor Swift. I'm sure you're nowhere close to being a "nightmare dressed in a daydream," but the lyrics are perfect for when you want to get theatrical with your lip syncing skills.

Invite three of your friends to join you in lip syncing this epic Boyz II Men ballad. There's also a sweet spoken monologue if you want to take a break from fake singing.

If you're going to lip sync this 1978 hit from Queen, be sure to pair it with some of those sweet dance moves Paul Rudd showcased during his Lip Sync Battle with Jimmy Fallon.

Take a walk down a road marked "nostalgia" by lip syncing this Spice Girls classic from 1996.

You know you want an excuse to break out those sweet *NSYNC dance moves you practiced in front of the mirror ad nauseam in 2000.

"Single Ladies (Put A Ring on It)" — Beyoncé

Here's another one to showcase your sassiest dance moves.

"Since U Been Gone" — Kelly Clarkson

Having a bad day? Lip sync all your frustrations away by rocking out to this Kelly Clarkson hit circa 2004.

Are you mustering up the courage to hand over your digits to a crush? There's nothing like a little private lip syncing to "Call Me Maybe" by Carly Rae Jepsen to encourage some gumption.

No lip syncing session would be complete without a little swagger. Crank up this 1977 smash and get your strut on.

More like this
How 2 'American Idol' Singers Performed With COVID-19 & Made It Into The Top 5
By Jake Viswanath
After 'Heartstopper' Used This Indie Artist’s Song, Streams For It Soared 8,000%
By Alyssa Lapid
Lisa Marie Presley Reviewed Baz Luhrmann’s ‘Elvis’ Movie On Twitter
By Grace Wehniainen
Twitter Is Upset About The 'American Idol' Top 3 Results: "Who TF Is Voting?"
By Jake Viswanath
Get Even More From Bustle — Sign Up For The Newsletter