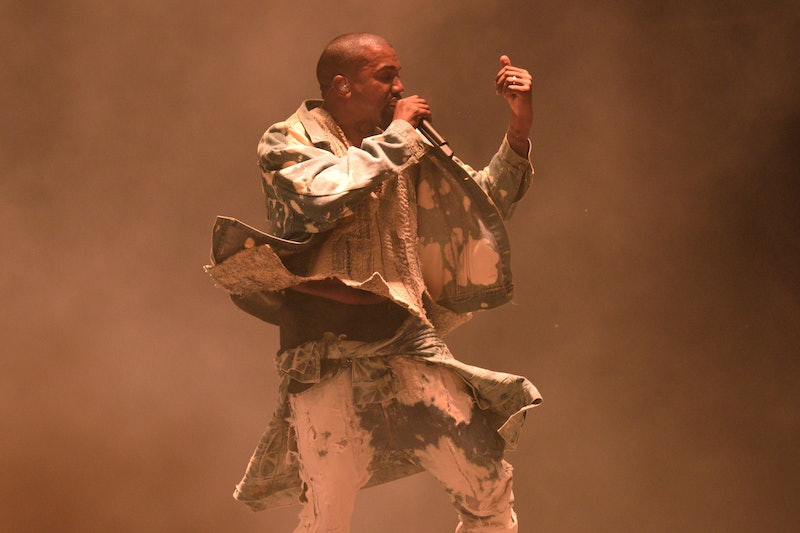 Believe it or not, it's been nearly six years since Kanye West's infamous interruption at the MTV Video Music Awards. And you know what? It's officially time he's forgiven. After all, Taylor Swift seems to have gotten over it. If there's no "bad blood" between them, then why vilify him forever? Plus, there's another reason that that 2009 VMA moment should be ancient history: at his concert in Glastonbury, England on Saturday night, Kanye West got interrupted by a fan on stage. Yup, Kanye got Kanye-ed — someone ran onstage during his performance and gave him a taste of his own medicine.

According to reports, the interrupter was the comedian Simon Brodkin, acting as one of his characters, Lee Nelson. It's basically the equivalent of Sacha Baron Cohen running on stage as Borat or something of that sort. Nelson even sported a t-shirt that said "Lee-zus" and tweeted about the incident afterward, writing:

Some people were saying Kanye shouldn't headline Glastonbury so I thought I'd give him a hand.

He also proudly proclaimed, "I Kanye'd Kanye. That was for you @taylorswift13 #Leezus." Hmmm, I wonder what T. Swift thinks of this whole situation? Would she say "there's nothing better than revenge," or have some sympathy for her newfound friend?

To be honest, I'm in the sympathy boat and proud of Kanye for how he reacted. He was a true Taylor Swift in this scenario, aka he handled the situation with dignity. Instead of letting his temper take over, Kanye simply stayed calm as Nelson was escorted from the stage and then began the song again from the beginning. Watch below:

If this interruption happened years ago, Kanye probably would've had an entirely different reaction. That's because he's grown up A LOT since the VMA mishap. Don't believe me? Here's a round-up of evidence that Kanye has matured right before our eyes:

He's a proud father and husband

The old Kanye probably wouldn't have posted such a touching tweet. And this photo Kim posted on Instagram? Yeah, highly unlikely he'd let anyone see that.

Seriously, how cute is that photo?! I want to frame it and hang it up in my living room.

Remember when Kanye West owned his identity as a college dropout? Well, he recently went back to school... kind of. West received an honorary doctorate degree when giving a lecture at the School of the Art Institute of Chicago.

He's not afraid to apologize

Sure, he may sometimes put his foot in his mouth. But at least he's mature enough to own up to it and apologize.

He referred to himself as "humbled"

Shocking, right? Also, the fact that he's made TIME's list of the 100 Most Influential People speaks for itself.

We're glad to see that Kanye's growing up, and it's clear that T-Swift is wearing off on him. What's his next move going to be: buying cats? Making jam? Forming a "squad?" We can only hope.

More like this
Taylor Swift Is "Spiraling" After Releasing "This Love (Taylor's Version)"
By Jake Viswanath
The Very Best Quotes From Dr. Taylor Swift’s NYU Graduation Speech
By Grace Wehniainen
Watch Pete Davidson Joke About The “Really Weird” Kanye West Drama On Stage
By Brad Witter
Kanye Walked Out Of Kim's 'SNL' Monologue Because Of These 2 Words
By Jake Viswanath
Get Even More From Bustle — Sign Up For The Newsletter