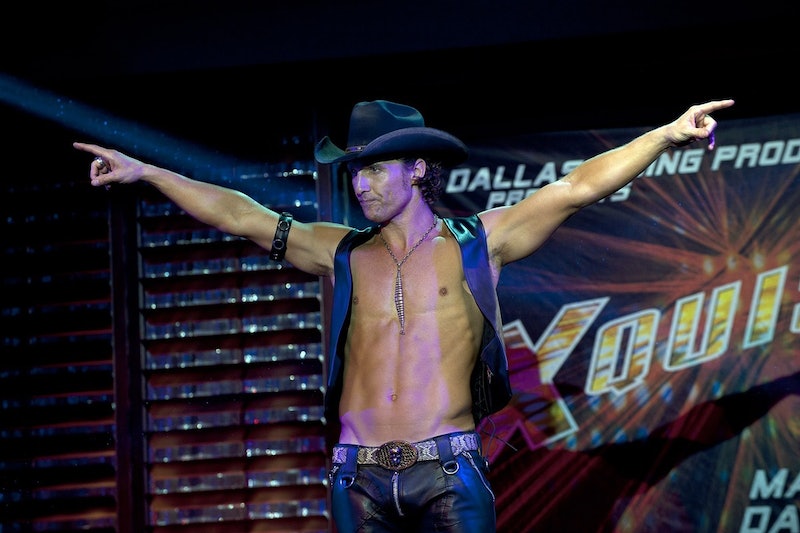 We're all friends here and this is a safe space, okay? We can be honest with each other our deepest secrets: namely, that we've all been waiting for the release of Magic Mike XXL ever since the original Magic Mike film came out back in 2012, right? Hey, it's okay! Nothing to be ashamed of — we're all in the same boat. It's pretty amazing that we're getting a sequel at all, given that the first movie was such a welcome surprise, so I hesitate to look a gift horse in the mouth by mentioning one small qualm I have with the follow-up: Matthew McConaughey, who played MC Dallas in the first film, isn't in it. We've known that the actor wouldn't be in the movie since late last year, but not the reason — so why isn't Matthew McConaughey in Magic Mike XXL ?

Unfortunately, we still don't have a definite answer. Neither McConaughey nor the filmmakers have spoken up about his absence, other that confirming that it is, indeed, the case (for awhile, it was rumored McConaughey would have a cameo in the sequel, but it didn't pan out). One can assume, however, that the actor didn't return because he's just too busy; after all, his last few years have consisted of winning an Oscar, starring in an HBO series, filming several movies, and doing all those Lincoln car commercials. How would he have fit in a role in Magic Mike XXL, anyhow?

Still, not having him in the sequel is certainly a disappointment. At least the movie acknowledges his absence, making several references to a Dallas-less club. It should go without saying that there are spoilers ahead and to proceed at your own risk, though it doesn't particularly ruin too many plot points for you to know what happened to the former owner of Xquisite.

To those who saw the first film, it probably won't come as all that much of a surprise to hear that at the beginning of Magic Mike XXL, it's revealed that Dallas ditched the dancers three years ago — or right at the end of the first movie. He was always a bit of a controlling jerk to begin with, though, so it doesn't take the guys to realize that they're pretty much better off without him, even if they're still resentful about being left in the lurch. Ever the optimists, however, they decide to use Dallas' departure as reason to turn a new leaf and revive the group in a major way by getting all new costumes, choreographing new routines, and basically doing all the fun stuff that stick-in-the-mud Dallas never let them do. And oh, do they let loose.

Even if a few of you are still missing McConaughey and his character despite all that, it's hard to be too upset about his absence when we have Jada Pinkett Smith filling in as the owner of an exotic dance club who later becomes the dancers' new MC. This change of plot makes perfect sense for the film, and if anything, just makes it clear that Magic Mike XXL is more than just a throwaway sequel that recycles the same premise as the original to push ticket sales. It stands on its own two feet, which is pretty impressive, and a lot of fun to watch.

Now the real question is, will there be a Magic Mike 3? We'd love to see Pinkett Smith and McConaughey come back for that one — can you imagine how good a face-off between those two would be?