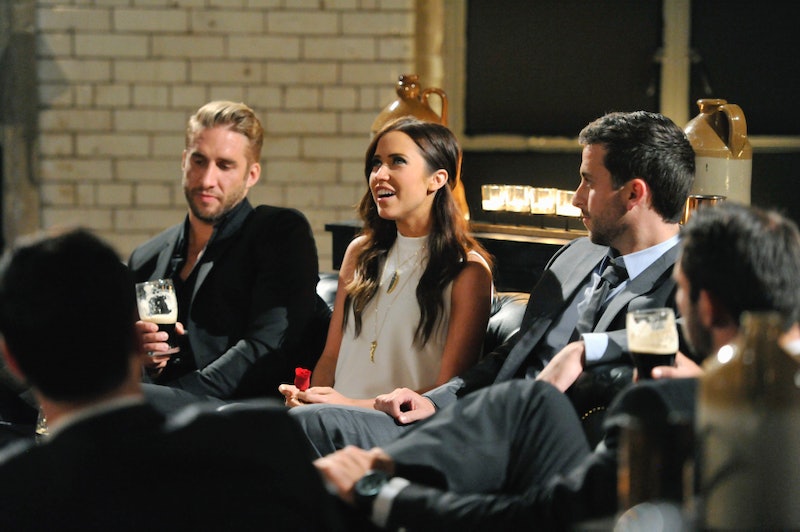 In normal Bachelor/ette land, the Bachelor/ette meets four of his/her suitor’s families in hometown week, kicks one off the show, and takes the three remaining people for a roll in the Fantasy Suite (separately, of course). Given the... unprecedented nature of Kaitlyn’s sleeping with Nick on The Bachelorette , Chris Harrison stopped by Kaitlyn’s hotel room to tell her how it was going to go down from now on: The Fantasy Suite dates are coming up before hometown dates. Yep, that’s right — no hometown week just yet. Kaitlyn has to now cut the number of suitors from six to three and spend some, as Chris Harrison put it, “off-camera time” with each of the remaining guys.

Honestly, it sort of felt like Chris Harrison was pimping Kaitlyn out during the whole conversation — I was super uncomfortable watching it, and Kaitlyn also seemed pretty out of sorts, given everything that’s happened in the past um, two days? From Kaitlyn and Chris Harrison’s complete overuse of the word “intimate”, as well as Shawn’s insinuation that they spent some separate time together, it seems to me like Shawn and Kaitlyn also consummated their relationship. Or that something went down in Texas. Chris Harrison saying that she should spend time with the other guys “off camera” before going to their hometowns, and that it would “level the playing field” sort of feels like he’s telling her to sleep with everyone, doesn’t it? I think it’s a little disturbing.

Now, don’t get me wrong. Kaitlyn should be having sex with whomever she wants to have sex with. That’s not really my beef here. My problem is that the show is now capitalizing on the fact that she is open and honest about sex being an important part of her relationship. Chris Harrison is somehow protecting the other guys (because no one knows that Nick and Kaitlyn did the deed) at the expense of Kaitlyn. It’s not that she has to sleep with the guys she picks for her Fantasy Suite dates, but it’s kind of expected, isn’t it? The guys even seem pretty uneasy about all of this, too.

While I think it’s perfectly healthy for Kaitlyn to want to be, as they referred to it 30,000 times, “intimate” with someone before she meets his family, I don’t like the way the show is going about it. I'm not surprised that such an unconventional season is changing the order of the dates, but I hope it's for the benefit of everyone, because right now it all seems a little odd.