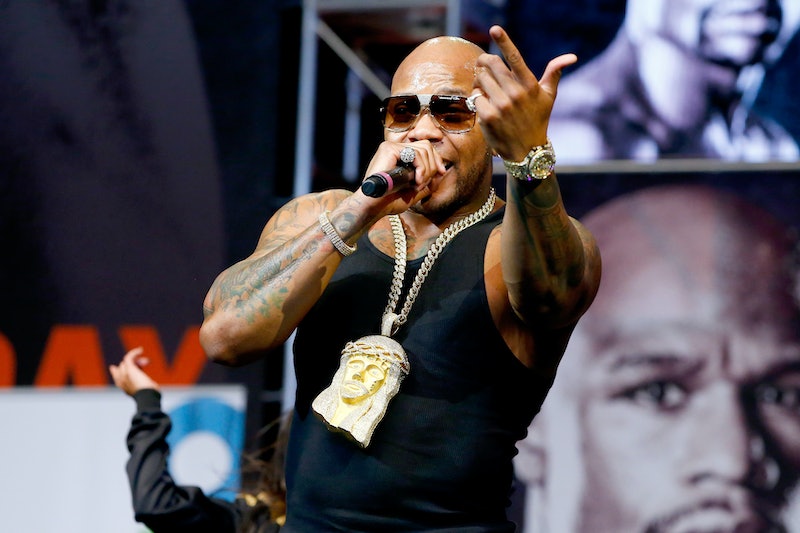 It looks like more bad news for Donald Trump's upcoming Miss USA pageant: In the wake of controversy following comments Trump made about Mexican immigrants, rapper Flo Rida has reportedly left the Miss USA pageant, after having been set to perform at the ceremony on July 12 in Baton Rouse, Louisiana. Flo Rida is the latest public figure to disassociate themselves with the event: Just this week, NBC ended their partnership with Trump, and announced that the pageant would not be broadcast on the network (a rep for Miss USA has since confirmed to Bustle that the event will be livestreamed on the pageant's official website) — additionally, both Cheryl Burke and Thomas Roberts ended their affiliation with Miss USA. So, now that Flo has flown the coop, who's actually left?

It looks like one person who is definitely still in for the pageant is Jeannie Mai, the 36-year old host of the daytime talk show The Real. Speaking to People, Mai opened up about making the the difficult decision to stay involved in this year's ceremony following Trump's remarks:

For the past several years, I have been co-hosting both Miss USA and Miss Universe aligned to support President Paula Shugart. I can't abandon these women when they need our support now more than ever. The mission of the Miss Universe organization has always been to unite women from all over the world and celebrate different cultures.They empower women to become role models in their communities in order to build self-esteem and advance philanthropic initiatives.

Apart from Mai, however, it seems that more people have left the event than made the decision to stay affiliated with it. On Wednesday alone, according to ABC News, The Voice winner Craig Wayne Boyd and pop singer Natalie La Rose dropped out, as well. (ABC News also reports that there were no more scheduled performers, making the fact that Flo Rida has now dropped out even worse for the event.)

Additionally, Trump lost his relationship with Macy's and Univision, and the country of Mexico has made the decision not to send a contestant to the Trump-owned Miss Universe pageant this year.

And not only are performers dropping out of Miss USA, but judges and hosts, are too. Football player Emmitt Smith and HGTV's Jonathan Scott from Property Brothers— both booked as judges — also left the pageat. Scott wrote a message on his Facebook page on Tuesday saying that he was disappointed to have to leave because he admires all the women in the pageant, but ultimately: "we are all on this big rock together, and I choose love." Scott posted a video on Wednesday talking more about his decision and Trump's comments, stating that he is an immigrant himself.

Though Trump has not commented on anything concerning the future of the Miss USA or Miss Universe pageants, he did respond to NBC cutting ties with him on Monday. In a statement released to Bustle through his representative, Trump stated:

Additionally, a rep for the Miss USA pageant confirmed to Bustle that the event will go on as scheduled on July 12, stating in a press release:

We are disheartened by recent events but the show will go on … While world politics and other influences will undoubtedly play a role, the pageant will always seek to transcend controversy. It is unfortunate that recent events beyond our control have only served to negatively impact the women who participate in the pageant, our state directors, our sponsors and our fans. We want our supporters to know we remain committed to them and we will be conducting the pageant, regardless of the current situation. We are moving forward, full-steam ahead as planned next two weeks, culminating in the crowning of a new Miss USA on July 12th.