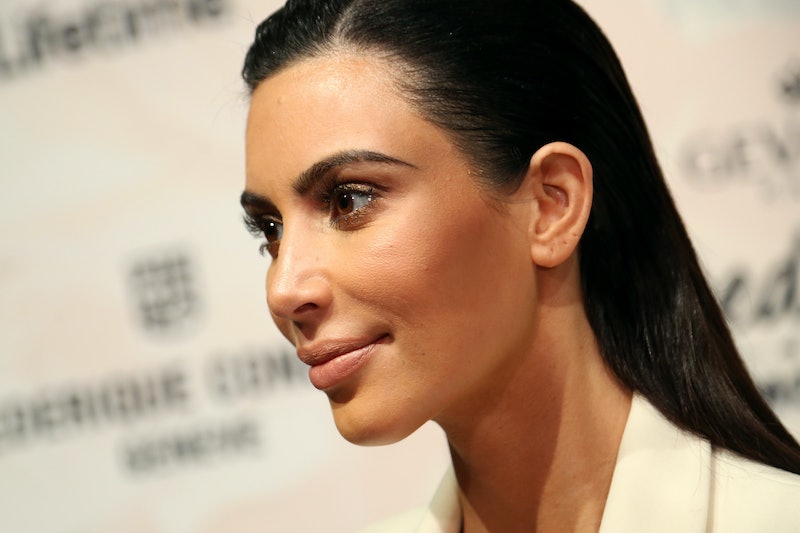 With a successful reality show, a book of selfies, and a multimillion dollar mobile game to her name, Kim Kardashian West is probably the last person you'd expect to make a political statement, but maybe she's the perfect person to do so. On Tuesday, Kardashian expressed support for gun control — as well as for Hillary Clinton and gay marriage — during an interview organized by the Commonwealth Club of California, a prestigious political forum. She's the latest celebrity to add buzz to the issue, but her opinion might actually matter more than she sometimes gets credit for.

The interview took place in San Francisco with the first African American female judge in Northern California, LaDoris Cornell, asking the questions. It's an interesting, and somewhat unexpected, appearance for selfie-queen Kim K. Former Commonwealth Club events have featured speakers such as Franklin D. Roosevelt and Martin Luther King, Jr. Still, Kardashian had a lot to say, and a lot that we needed to hear.

She said she hopes Clinton will become the first female president and that the Supreme Court's decision to legalize gay marriage made her proud to be an American. She also said that if she could change the world, she'd focus on gun control.

I'm not really a gun person, and we do not have strict enough gun control laws.

The timing here shouldn't go unnoticed. We're just about two weeks out from the shooting spree at a South Carolina church that left nine people dead. Kardashian is hardly setting a trend with her statements, as several political and non-political leaders have pushed for gun control recently, but she could be setting a trend for her own political activism.

Here's why Kardashian's stance on gun control matters: She has over 33 million Twitter followers (which is more than 10 times the following of @POTUS), seemingly endless resources, and the ability to break the Internet. In other words, she's a fundraising machine with name recognition to boot and almost no competition for media coverage. If she ran for president, Donald Trump would probably be in trouble.

Until now, Kardashian has only mildly involved herself in politics. She has declared herself to be a Democrat, and she previously endorsed a congressional candidate from California on Instagram, but she hasn't really made a name for herself when it comes to activism or issue advocacy. Tuesday night's event might have changed all that.

Kardashian made the appearance to promote her new book, Selfish. But why exactly did she choose this event? Celebrities of her stature get invited to countless events and are asked to give countless interviews. Her book, which is full of selfies, has little to nothing to do with politics. The conversation strayed far from selfies, and Kardashian herself brought up the issue of gun control. To me, this interview seems like a deliberate and strategic attempt for Kim K to reach a new audience and talk about new issues… while still justifying her affinity for selfies.

She didn't have to go to the event, she didn't have to bring up gun control, and she didn't have to select the first African American female judge in Northern California to interview her — yet she did. Her success up until this point shows that despite whatever criticism comes her way, Kardashian knows how to build a brand. Could it be that she wants to add political activist? Maybe I'm getting ahead of myself, but at the very least, I'm happy she's using her power to talk about a deep-rooted issue rather than how to break the Internet with another nude selfie.