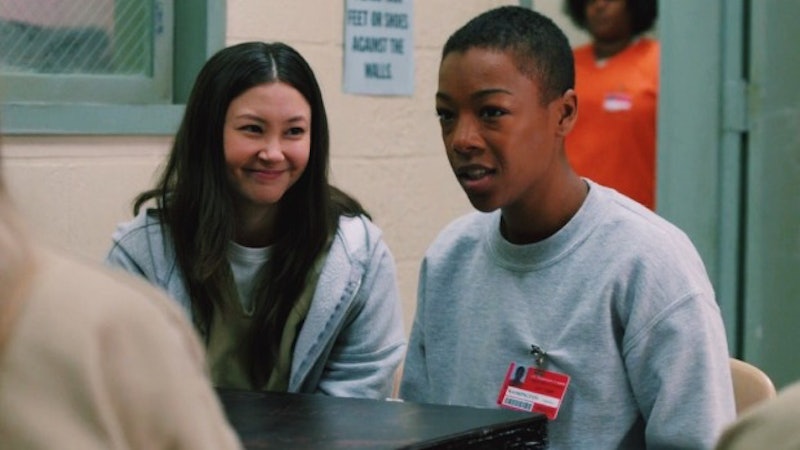 Everyone's favorite series about prison, Orange Is the New Black, capped off its third season with the potential introduction of a brand new love story: Soso and Poussey. The two characters were in each other's orbit all season long thanks to the cult of Norma, but it wasn't until the finale when they truly seemed to see each other. When they held hands during the magical pond dip scene, it was suddenly obvious to me that these two ladies are OTP material.

In retrospect, all the signs of their impending relationship were there from the start. Besides Norma, Poussey is the only person in Litchfield who takes Soso seriously, and she was an ally for Soso during their time in the cult of Norma. Add in the fact that Poussey kept Soso from being sent to the psych ward, and Season 3 was a big year for these ladies' budding relationship. While the season ended just as their potential romance was beginning, it is clear they are perfect for each other.

From their temperaments to their prison lives to their personal backgrounds, Soso and Poussey are just enough alike to make sense, and just different enough to make for a compelling love story. They need each other, and that's a powerful feeling — but they could be good for each other as well.

Here are all the reasons why Soso and Poussey are perfect for each other (and are totally going to steal your heart next season):

1. They Both Wear Their Hearts On Their Sleeves

One of the reasons Soso had so much trouble adjusting to prison is because she is such an open person. She doesn't have the defense mechanisms in place to hide what she's feeling and what she wants in the way that the other women do. Poussey is the same way: She can't keep her emotions bottled up inside, so she tells Taystee how she feels and she refuses to join Vee. This makes them both more vulnerable than their fellow inmates, but also more authentic.

2. They Both Need People

Poussey misses being in a relationship. She desperately needs to feel intimately connected with someone, and Soso becomes more and more lost as the other inmates make her realize how alone she really is. The kind of loneliness they both feel is powerful and destructive — they could fill that void for each other.

3. Season 3 Was Rough On Both Of Them

Soso attempted suicide, and Poussey's drinking got out of control. Weirdly (or was it kismet?), it was because Poussey was looking for a drink that she found Soso passed out in the library. When they both hit rock bottom, they ended up finding each other.

4. They Are All Kinds Of Adorable

I'm sorry, but I have to be superficial for a minute because Soso and Poussey are beyond cute together. Poussey's sense of humor and Soso sweet sincerity just complement each other beautifully — and don't even get me started on their smiles.

5. Their Backgrounds Are Similar

I am still waiting patiently for a Soso-centric episode, but it is clear that she is a free spirit, and she's well-educated to the point where she is bursting with ideas. Poussey, on the other hand, is worldly. She's traveled all over thanks to her father's military background, and she has a unique way of looking at the world. My point is, they would never run out of things to talk about.

6. They Are Optimists At Heart

Life has handed Soso and Poussey more than their fair share of hard knocks, but they remain optimistic. Yes, they've both went through dark patches of depression, but they still believe people are basically good. That's a rare quality — not just for people in prison, but for anyone.

7. They Deserve A Fresh Start

After everything they've been through, Soso and Poussey deserve a fresh start. When they took each other's hands in the lake, that's exactly what it felt like they were getting. They can start fresh with each other, they can be each other's lifeline, and they can make a prison just a little bit less dark by going through it together.