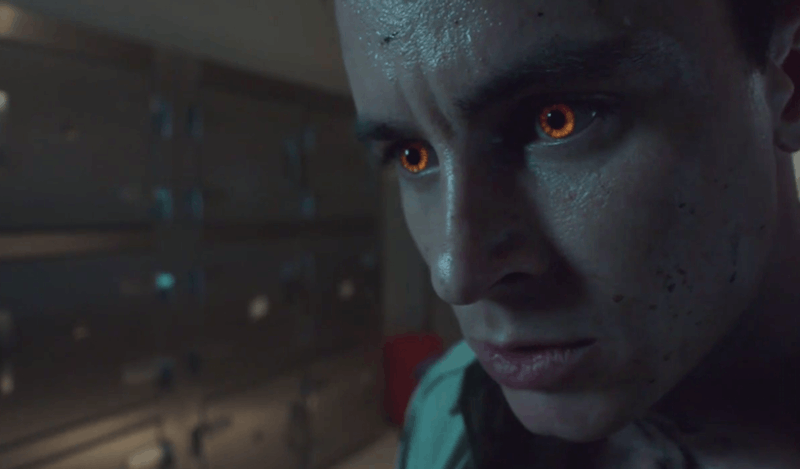 Teen Wolf's mythology is often so complex and confusing (at least for the first 10 episodes of a season) that it's not only difficult to find answers, it's hard to even know which questions you're supposed to be asking. For example, is it even worth asking what the Big Bad — presumably the Dread Doctors — is up to this season, when we know Theo is out there trying to infiltrate the pack and breaking his pseudo-parents' hands for poor penmanship? But there's one question that its been made abundantly clear over the last two seasons that we're supposed to be asking: What is Deputy Parrish on Teen Wolf ?

And asked, we have! The Teen Wolf fandom has been theorizing what kind of supernatural creature Deputy Parrish might be since he ever so casually told Sheriff Stilinski that he just "felt drawn" to Beacon Hills. Uh huh, we've heard that one before. But the speculation really ramped up about right about the time Parrish's eyes started glowing and he survived an attempted homicide by fire with nothing but a little nudity to show for it. The long-standing theory following Parrish's fire survival, and even before that, is that the good deputy is a phoenix, what with the rising-from-the-ashes and all that. But something tells me that if it's taking this long to spit it out, the answer won't be quite so obvious as "fire bird." I present for your official Parrish consideration: The Salamander.

A striking resemblance, no?

Now, I am certainly not the first person to theorize that Parrish might be a weresalamander (what a sentence!). Other than the popular phoenix theory, there are plenty of fans out there who believe that Parrish could be anything from a salamander to a dragon to — following Kira's fiery display in "Dreamcatchers" — a fire kitsune. But looking at the historical and mythological significance of the salamander, my mind has gotten past the fact that a salamander is a tiny lizard (let's not forget that the lovely Jackson has already made growing a tail common practice around Beacon Hills), but also a noble supernatural creature.

Legend Of The Salamander

Like many mythical creatures, the lore of the salamander is based on the real, naturally occurring salamander — what we would know as a spotted lizard. The myth of the salamander shows up in the literature of many lores, including classical, medieval, and renaissance, but it always has one common factor: resistance to fire. Pliny the Elder, the Roman natural philosopher, believed that the salamander's body maintained such a cool temperature that it could extinguish fire if touched.

That would certainly explain why Parrish was able to emerge whole from the car fire, as opposed to a phoenix-like rebirth that he happened not to mention. We also know from Season 5's premiere that Parrish has he ability to heal. Salamanders are commonly thought to have the power of renewal; of salamanders, Leonardo da Vinci wrote in his published notebooks: "This has no digestive organs, and gets no food but from the fire...which renews its scaly skin in the fire,—for virtue"

Virtue is also a trait that follows the legend of the salamander. Of the salamander's allegorical importance, an online Medieval Bestiary states, "the salamander represents righteous people, who can withstand fire." Fire is often representative of cleansing powers and because of the salamander's ability to pass through it unscathed, its often thought to represent courage, loyalty, and righteousness. Depending on how he handles this Lydia situation, I might categorize Jordan Parrish as particularly righteous.

OK, But What About A Weresalamander?

The real salamander gained such lore around it because of the lizard's tendency to hibernate in logs; when logs with salamanders inside were used to build a fire, the assembler of that fire would soon see salamanders scurrying out of a roaring fire, emerging from the flames as alive as can be. No, that common image doesn't seem as magical or righteous as the "fire lizard" of lore, but when you boil Scott, Kira, and Malia down to their most animalistic elements, they're simply wolves, foxes, and coyotes with extra powers as a part of their "were" attributes, and their humanity. Why shouldn't Parrish be a lizard with glowing eyes and the ability to walk through fire?

Here's hoping for a full transformation in Teen Wolf Season 5, tail and all!

More like this
The ‘Squid Game’ Season 2 Renewal Teases A Creepy New Figure & A Return
By Brian Anthony Hernandez and Bustle Editors
Everything We Know About When To Expect Money Heist: Korea Part 2
By Kadin Burnett
Wait, What’s Going On With Ben In That Umbrella Academy Season 3 Post-Credits Scene?
By Gretchen Smail
Viktor Hargreeves’ Coming Out Scenes Are The Sweetest Part Of Umbrella Academy Season 3
By Gretchen Smail
Get Even More From Bustle — Sign Up For The Newsletter