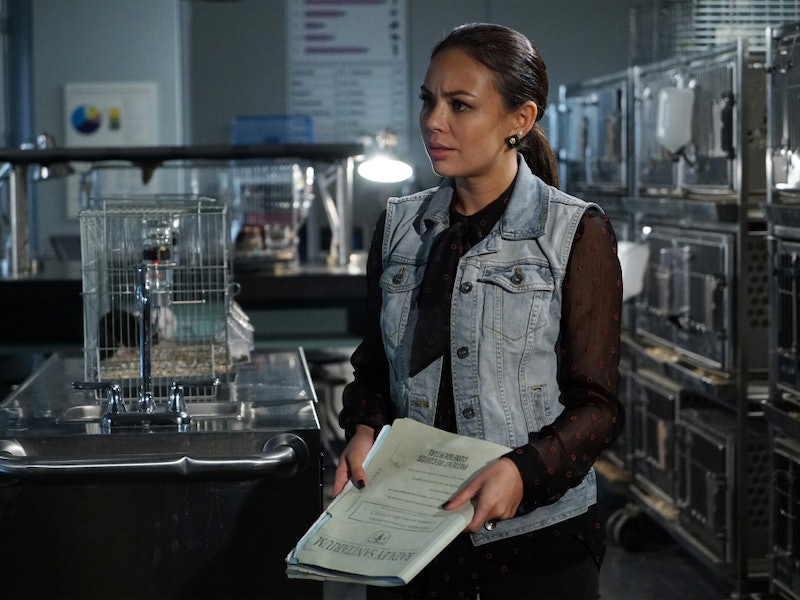 Mona Vanderwaal is one of the most complicated characters on Pretty Little Liars. First, she's A. Then she's diagnosed with a mental disorder. Then she's waging a war against Alison. Then she's murdered. Then she's not murdered but still locked away in an underground bunker. How much bad luck can one girl have? There are many that think that Mona has just been dealt a bad hand in life, but I am definitely not one of them — Mona may be in a weird paranoid-meets-catatonic state as of late, but she's certainly not a victim. I think that Mona is working for Charles DiLaurentis as a means to bring Alison and the other Liars down.

Both Mona and Charles have a ton in common — they both spent a long time locked away in Radley, like dolls, and want to see the Liars tortured and/or locked away for life. What a friendship they’ve struck up! Of course, all of this is assumed on the notion that Charles DiLaurentis is not dead, because I don’t think that’s the case, either. Though Alison’s dad, Kenneth, told Alison and Jason that Charles died, I think that Jessica helped her son escape from his mental institution and told everyone else that he died. For more Charles theories, check out Bustle's Pretty Little Liars podcast.

Way back in Season 2, Mona was our OG A. She hated Alison because Alison made her life a living hell in school, and she hated the rest of the Liars because they basically took Hanna, her absolute best friend at the time, away from her. That’s motive enough for a teenager to get pissed, and Mona is no ordinary teenager. She plans, she plots, and she executes. Everything up to her being caught in Season 2 and sent to Radley was all Mona’s doing, but I think she was introduced to Charles during her time in Radley and between them, they concocted a plan to make the Liars really pay.

When Mona got out of Radley, she acted like her normal self again, but really, she was acting as a mole in order to gain intelligence on the Liars. By becoming their friend, she had access to things that Charles could have never known about, and she was able to tell him all of the clues that the Liars were figuring out so he could stay one step ahead. Having Mona on your team is kind of a no brainer.

The real piece de resistance came when Mona faked her own death… with the help of Charles. Both Charles and Mona hated Alison and wanted to see her put in jail, so they made it look like Alison killed Mona and her friends helped her, effectively putting the girls in prison. Charles then took the girls down to his underground bunker lair, and Mona played along to make it look like she was kidnapped also. This raises the question of, “what does Sara Harvey know,” but that’s a question for another day.

Now, Mona and Charles are working on contingency plans. They’re always a step ahead of the liars, so the setback of the girls finding out Charles’ true identity won’t be a setback for long — Mona’s on the inside, and she’s ready to share all the dirt. How far will Mona go? We'll just have to wait and see.