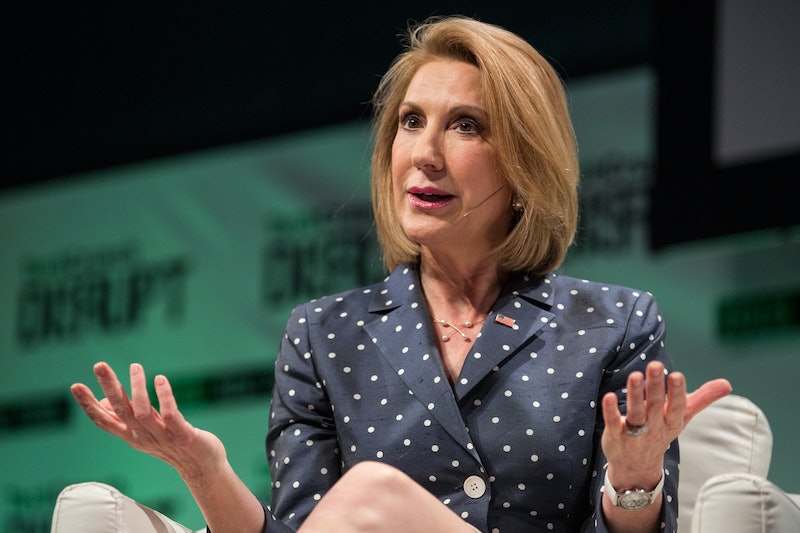 Things I didn't expect to see today include presidential candidate Carly Fiorina reenacting workplace sexism in a video for BuzzFeed, but, well… that's how I'm ending my day, apparently. Like all BuzzFeed videos, it's short, but very to the point: In a series of quick, one-to-two-line vignettes, we witness Fiorina in a position of power saying the kinds of things people say casually to female employees all the time. The twist, of course, is that in this case, Fiorina directs them towards her male employees, highlighting a double standard I honestly can't believe we still have to keep driving home. The bottom line: If it's not acceptable to ask men how they manage to walk in those shoes, it's not acceptable to ask it of women, either. So let's just… stop asking everyone those sorts of things. Now.

Fiorina, who announced her bid for the Republican nomination at the beginning of May, has openly identified herself as a feminist; however, her brand of feminism — as she put it, “A feminist is a woman who lives the life she chooses” — has been found troubling by some. As Bustle's Abby Johnston pointed out recently, the issue here isn't about who can or can't call themselves a feminist; the issue is that not all women can “live the life she chooses” due to a wide variety of factors, from economic ones to societal ones. Wrote Johnston at the time:

How, exactly, can a woman “life the life she's chosen” within a system that is nothing but closed doors for the majority of women? Fiorina has an incredible personal story. She climbed the ranks from secretary to running Hewlet-Packard, but not just because she chose to do so. She has an elite education, grew up in a good home, and is now extremely wealthy.

Not every woman is that fortunate. Heck, not every person is that fortunate. If we were, there would be no test score gap between children from low-income families and those from higher ones; everyone would be getting a solid college eduation; and speaking of those college graduates, we wouldn't be sending them out into the world with increasingly high mountains of debt and few job prospects.

That's the problem with her definition of feminism. Although Fiorina acknowledges that women are still at a disadvantage in achieving their goals, which is absolutely true, she doesn't offer a way to get there other than, uh, choosing to. People who came from situations similar to Fiorina's will always be able to succeed. But if you didn't go to MIT and Stanford? That's when it gets trickier.

Fiorina's appearance in this video is a pretty clear attempt to make herself accessible to the Millennial generation, and perhaps it's also one to cement her platform as one devoted, at least in part, to working on gender equality. It kind of makes me roll my eyes a little… but she does successfully highlight real problems still — still! — faced by women in the workplace today. Most of it is casual sexism, which in some ways is even more insidious than out-and-out, “Get back in the kitchen and make me a sandwich” sexism — and as long as this kind of behavior continues to be an issue, we need to keep pointing it out. Holding people accountable for it, without fail, might finally help us rearrange our thinking as a society and end it once and for all.

Here are just a few of the scenarios Fiorina reenacts; scroll down to watch the full video.

1. Being Defined by Your Family

Family is great and all, but how often have you seen anyone ask a dude this question? And that's not all — there's also this gem:

Research has found that women still take care of more domestic chores than men do; according to one report, women make twice as many trips shepherding their children around than men do, as well as twice as many grocery runs. This domestic inequity generally leads into another set of statistics: The ones that say that women take more time off than men. According to the Pew Research Center, it's because the child-rearing still falls primarily to women.

None of this makes it OK for anyone to say these things to women. How about we work on evening out the domestic chores and child-rearing responsibilities instead?

Just because women are still bearing a disproportionate amount of the domestic burden at home doesn't mean they have to bear it at work, too. If someone actually does like to bake and volunteers themself to handle Gina's birthday cake? Awesome. But don't just shove it on someone because of traditional gender roles.

3. Being Talked Down To

Why, yes. Yes, we can. Because we are all adults here, and not middle schoolers.

4. Being Defined by Your Gender

What an amazing concept!

More like this
Beyoncé & Madonna’s “Break My Soul” Remix Honors A Group Of Black Icons
By Stephanie Topacio Long
22 Movies On Netflix That Are Perfect For The Whole Family
By Bustle Editors
Your Daily Horoscope August 11, 2022
By Mecca Woods
How To Use Instagram Story Highlights So Everyone Sees Your Fave Stories
By Brandi Neal and Emma Carey
Get Even More From Bustle — Sign Up For The Newsletter