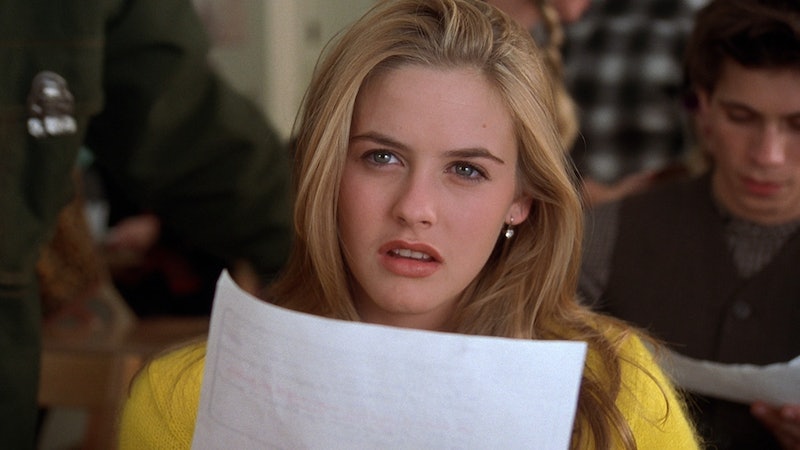 If you watch the trailer for 1995's classic teen comedy Clueless, it'd have you believe that its main character Cher Horowitz is like, totally a ditz. She's depicted as a boy crazy fashion-lover who only cares about popularity. Now that the film is celebrating its 20th anniversary, any die-hard fan will tell you that Cher Horowitz is far from being a vapid valley girl. In fact, Clueless' hero is a brilliant, forward-thinking idealist who uses her popularity for the greater good. Along with being a fashion icon and the inspiration to Iggy Azalea's "Fancy" video, Cher is a major modern feminist icon. She doesn't let other shame or be shamed for their sexuality, she doesn't let scuzzy guys treat her like an object, and she surrounds herself with like-minded progressive men and women.

Cher's most memorable lines have become part of our pop culture language. "As if!" and "Whatever," were the definitive catch phrases of the mid to late '90s. We can thank Cher for a lot of iconic looks and lingo, but we can also thank her (well, creator Amy Heckerling technically) for changing the way young women are portrayed in film. Alicia Silverstone's portrayal gave us the model citizen all high school movies needed. Cher may have been rescued after being held up outside of a liquor store, but just moments later she's correcting college students on their Shakespeare. There's so much to admire about Cher's brain. Here are some of the best of Cher's brilliant moments in Clueless:

The delivery is all Valley Girl, but the substance is so much more. Cher is saying that the argument against her position is the Haitians would be a drain on resources. However, when you have ample resources and are willing to make democratic strides with them, it benefits everyone in the end. Bravo, Cher.

Her Feelings on The Media

I think what she's really getting at here is that removing violence from television isn't a hard and fast solution to violence at large in the world.

Her Medical Advice to Her Father

No ditzy 16-year-old would know her father's doctors appointments and importance of daily vitamins.

Cher knew her value and didn't let guys take advtantage of her. Wisdom beyond her high school years.

Her Knowledge Of Shakespeare

She's right, that Polonius guy did say that.

What "Makeover" Really Means To Her

It's not just about what you look like on the outside to Cher, it's also what's on the inside. As part of her new regimen with Tai, they would read one non-school book a week AND do something good for the planet and mankind. Amen.

Her Feelings On Sex

Cher didn't believe in shame one way or the other when it came to sex. If you had it or not, Cher didn't judge, nor did she allow herself to be judged.

Yes, she actually should have stopped. I can't believe the driving instructor didn't go back to the scene of the quasi-crime!

Her Protest To Gym Class

She's right, standing in line is a waste of time.

I don't think a "ditz" would use words like "maudlin" in everyday conversation.

Her Willingness To Grow

Taking time to learn about art with Christian is just another way Cher was far from being totally clueless. When she was "feeling icky," about her life and couldn't find happiness, she started up a charity drive for the Pismo Beach disaster.

Her Realization About Staying In

"I know it sounds mental, but sometimes I have more fun vegging out than when I go partying. Maybe because my party clothes are so binding." Amen sister, amen.

Cher wasn't a dumb blonde, she was a determined, intuitive, and emotionally intelligent young woman with a big heart. Cher Horowitz is a total inspiration.

More like this
Revisit 1992’s 'A League Of Their Own Cast' Photos After The New TV Series
By Grace Wehniainen
At 28, Lesley Manville Was Acting, Picketing, & Singing Kate Bush Songs
By Olivia-Anne Cleary
Rita Ora & Taika Waititi Are Reportedly Married
By Sophie McEvoy and Catharina Cheung
Netflix Reveals First Look At Wednesday In The 'Addams Family' Spinoff Series
By Bustle Editors
Get Even More From Bustle — Sign Up For The Newsletter