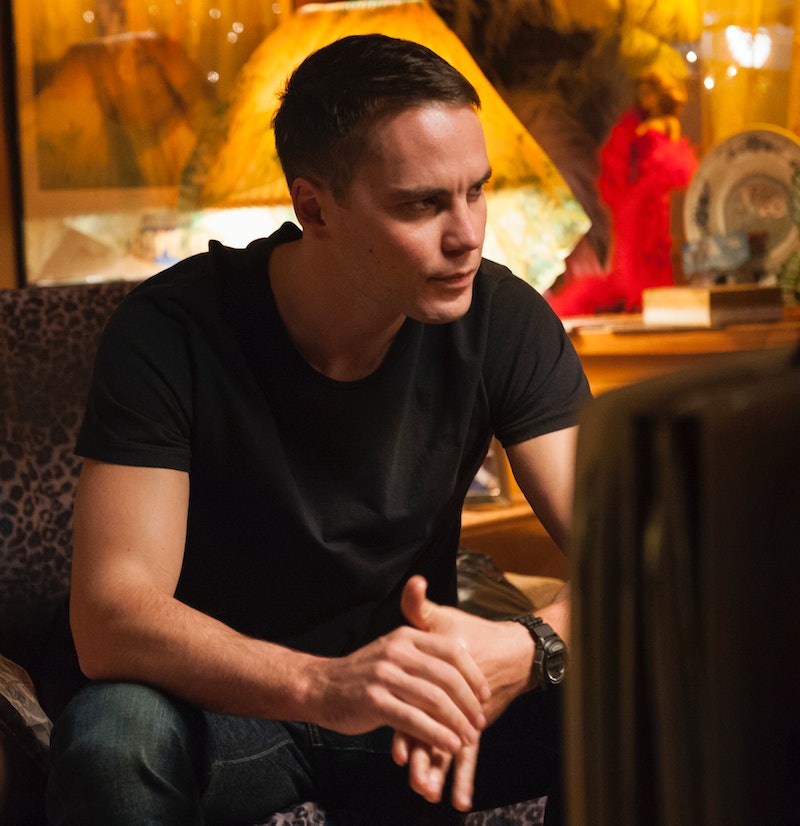 Poor Pau Woodrughl. Not only is True Detective Season 2's motorcycle cop totally the third wheel in his investigation with Ray Velcoro and Ani Bezzerides; not only is he on suspension for allegedly eliciting sexual favors from a motorist; not only is he covered in mysterious scars... but he's also struggling with his sexual identity, to boot. We've seen him grapple with a romantic past with an army buddy, and even reconnect with him, but will Paul actually come out as gay?

Throughout the season's first three episodes, viewers were slowly clued in to the truth about Paul, as we witnessed him taking Viagra before sex with his girlfriend Emily, gaze longingly at attractive men on the street, and bond with his Black Mountain buddy Miguel. But it wasn't until the most recent episode, "Down Will Come," that we got official confirmation: after a long night interrogating sex workers, Paul woke up to find himself in Miguel's bed. The cop didn't stick around long, hightailing it out of the apartment before he had time to acknowledge what had happened.

Based on his reaction, it's safe to assume that Paul won't be voluntarily broadcasting his sexuality anytime soon. In fact, when Emily told him that she was pregnant, he latched onto the news like a drowning man in need of a life raft, so relieved for an excuse to continue hiding his sexulaity. But of course we're only halfway through the season, so we all know that's not the end of the story...

In the promo for Episode 5, "Other Lives," Paul is witnessed having a dispute of some sort with his mother. "I know about you, Paulie," she taunts him. "I'm making a family!" he insists. It appears that Miguel might not be the only person who knows the truth about him. Will this confrontation finally cause Paul to attempt some introspection, leading to a new enlightened state of being? This is True Detective, so don't count on it. Do you really think any of this is going to have a happy ending?

Creator Nic Pizzolatto isn't exactly breaking any new ground with Paul's character yet. The gay man who's so far into self-denial that he swaggers around using gay slurs is such a well-worn trope that it has its own name: the "Armored Closet Gay." ("See also Gayngst if the character is particularly self-tormented about it.") Some of the more famous examples of this trope include Glee's Dave Karofsky, American Beauty's Colonel Fitts, and Brokeback Mountain's Ennis Del Mar.

Obviously, things didn't end well for these guys: Karofsky attempted suicide, Col. Fitts killed the object of his lust, and Ennis' lover was murdered. In the gritty world of Pizzolatto's Vinci, California, I wouldn't expect things to end too differently for Paul. (Then again, most viewers didn't expect Season 1 of True Detective to have a happy ending and look how that turned out.)

For his part, Kitsch doesn't sound all that optimistic about the chances of his character coming out anytime soon. In an interview with The Daily Beast, the Friday Night Lights actor stated that, "There is no real answer to what would happen if [it’s revealed], and I think that shame is so strong within himself that if he does answer to it, then it’s, 'OK, now what? What the f*** am I going to do now?'" Kitsch, who gave that interview earlier this month — long after the season had wrapped filming — would certainly know whether or not his character ever came to terms with his sexuality. The fact that he admits "there is no real answer" isn't exactly encouraging.

In the interview, Kitsch goes on to explain how having such a large secret has weighed Paul down for so long: "It goes back to the desperation, and how tragic that is. When we really see how desperate this guy is, it’s heartbreaking. It’s so sad. God knows how much f***ing energy it takes to hide behind all that." This brings to mind another quote from the promo for Episode 5, although this one's spoken by Paul's partner-in-solving-crime Ray: "Pain is inexhaustible. It's only people that get exhausted."

Whether or not Paul makes peace with his demons, Kitsch is proud of his portrayal of the tormented cop. "I will say that some of my best work in my career is in Episodes 4 and 5 — the repercussions of him answering to that call within himself. You’ll see the heartbreak and the weight that he carries, and what happens if he does answer to that." Things may not ultimately end happily for Paul, but for those viewers wondering if he will ever admit the truth to himself or others, it sounds as though this Sunday's episode should hold some major developments for the character.