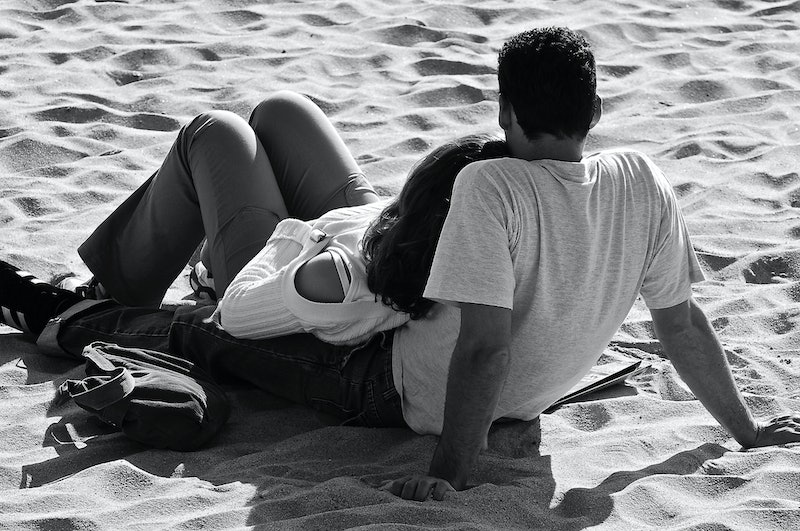 It may seem like stating the obvious, but all couples are different. Not every twosome needs to be live-tweeting their tandem bike ride, while showing off their matching shirts that say “I'm with him” and “This gal's mine,” to prove how much they care. Some people just don't like saying "I love you" all the time. In fact, the constant admissions of love in the form of PDA and meticulous relationship-updates on Facebook does not mean you love that person anymore than another couple who reserves the big three words for special occasions. A lot of couples are more reserved when it comes to showing each other how they feel, and for the sake of the rest of sanity, and the traffic of our Newsfeeds, refrain from broadcasting it to the heavens.

When it comes down to it, there are just some couples out there who aren't always saying “I love you”, and to the outside serial-posters who are looking into getting matching tattoos, these types of couples may seem strange. But really, couples who share their feelings more sparingly know a few important facts when it comes to relationships, and because of this, they're less likely to fizzle out so quickly.

So what is it, exactly, that couples who are opposed to saying “I love you” all the time know, that more zealous lovers don't?

1. You Don't Have To Always Say It To Prove It's True

Ah yes, the age old saying that actions speak louder than words: these couples seem to know this well. When it comes down to it, a simple “I love you” every now and again does not speak the same volumes as an unyielding support system and consistent encouragement. When your significant other does a great job showing you how they truly feel by being there to build you up when you need it, or having that cup of tea waiting for you when you get home after a rough day, it says a lot more than you could possibly ever imagine.

2. Being “That Couple” Doesn't Make Your Love Any Stronger

Like I said, just because you have 10 Facebook albums of you guys kissing from your last vacation, doesn't mean that you love each other anymore than any other couple. Couples who aren't so touchy-feely do not feel the need to project their love in anyone's face, because they are confident enough in their relationship to know how the other feels. Instead of broadcasting to the world, “This person is mine and only mine,” they are content to let that person be their own person, even when they are spending time together.

This goes along with the first point: it doesn't have to always be said for you to know its true. Sometimes, a couple will be good at saying it in other ways, communicating it physically or by going out of the way for their partner. When you're both happy and making each other happy, a mutual sense of bliss can be enough to say those three words without actually saying them.

4. You Don't Say It Unless You Mean It

This is a big one. For people who hate saying “I love you,” it's often because they feel this meaningful phrase has been way overused. Many people will throw around an “I love you,” like it's a Like on your latest 'gram of Froyo, all the while not knowing what a big deal that one sentence really is. When couples who are less over-the-top in their displays of affection say these words, they know that they 100 percent mean it. You better bet this took some serious thought and soul-searching, and because of that, those few times it is said actually mean the world.

5. Saying The Opposite Sometimes Means More

I don't know about you, but when I'm in a relationship with someone I truly love, I tend to act like a complete 5-year-old. But if he knows me well, he'll know that my insistent claims that I hate him, or that he's a dumb-ass actually mean that I am head-over-heels for him, and he's actually really freaking lucky. Sometimes being silly and playful says something more than a serious outpouring of emotion, especially if I'm just not in the mood to get that deep. There are situations that just seem to call for a more lighthearted approach, rather than a Shakespearean sonnet.

6. There Are Other Things To Do With Your Day Than Repeating Your Eternal Devotion

Just because you're in a relationship, doesn't mean you have to spend every second confessing your eternal love for that person. If we spent all of our time constantly reassuring our significant other that we loved them, what the hell else would there be to our relationship? There are other things you guys can do together that can just as easily get the message across. Often, real life will get in the way of the honeymooning, and you don't have time to be as affectionate as you would like. That doesn't mean there is anything wrong with the relationship, and the strongest of couples know that.

Telling someone you love them is definitely an essential part of a lasting relationship, especially if that is how you truly feel. When you let someone know of your love, you open up the possibility of a whole new chapter in your relationship, marked by a mutual respect and support that only truly loving someone can bring. But that doesn't mean you have to remind that person of this every second of every day. In fact, when it comes down to it, those who truly love each other just seem to know it. Yes, they will tell that person, but they will do it in new and exciting ways that can be so much more reassuring than uttering those three words.