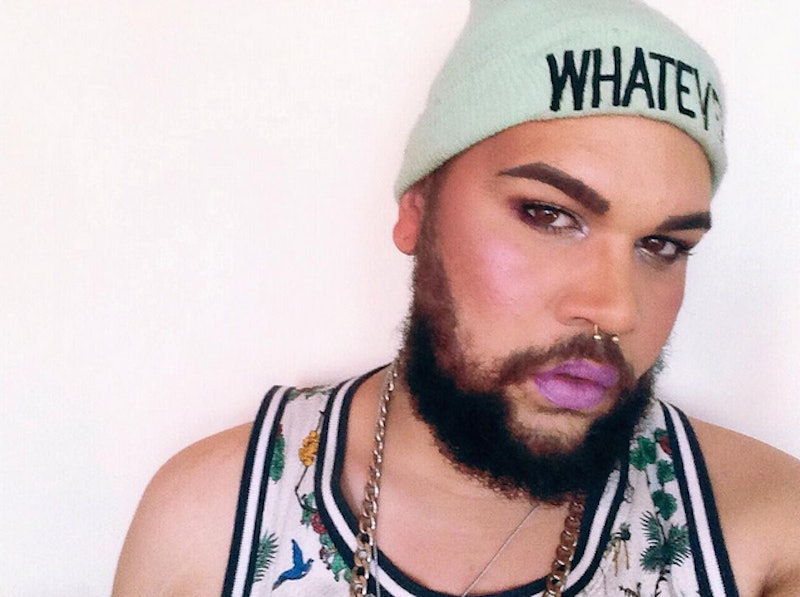 The rise in the relevancy and profile of plus size modeling and body positivity has been great the past couple of years, with almost everybody being able to name at least one plus size model's name. But none of these names ever seem to be those of plus size male models, begging the question, where are they all?

There is arguably an issue within the body positivity movement when it comes to the way we define terms like "body positive" or "plus size" — definitions that almost exclusively make us think of women. I can name a number of plus size models or bloggers without even having to consult Google: From Tess Holliday to Nadia Aboulhosn, the names just keep coming and coming (especially after Tess Holliday's highly public signing to Milk Management last year and the fact that female plus size models have been taking the fashion world by storm). Some, like model Ashley Graham, are even demanding that we stop using the term "plus size" on the grounds that all models are doing the same job, regardless of their size.

With plus size modeling and blogging being so central in pop culture right now, the lack of men is surprising and interesting. On the one hand, I'm incredibly pleased to have any field, including fashion, be female dominated. On the other, I don't believe that the body positivity movement can truly be all-inclusive when men are so underrepresented.

Although the plus size male model is rarely spotted in mainstream fashion, body positive male bloggers are a lot easier to find. Pushing for differing types of male bodies to be represented socially and in the media, these men are out to show their fellow large men that they too can be fat and fashionable. I've followed Marquis Neal on Tumblr for a long time and his refreshing take on fashion and personal style lights up my life. Other bloggers such as Michael-Anthony Spearman and chubstr.com show "life in your size" — refusing to allow size (and gender) to be a limitation on style.

Whilst being a fat cis man might be more commonly accepted in media than being a fat woman (a fat man can be in a film or television series without his body being an aspect of the plot line, but larger women in the media are usually either vilified or forced to recognize and joke about their own weight, á la “Fat Amy” in Pitch Perfect) that is not a reason to exclude them entirely from the body positivity conversation. Just as we must not thin shame, ignoring an entire gender from a supposedly all-inclusive size-focused movement is equally damaging. Although some plus size male bloggers are finally (and thankfully) getting some of the attention they deserve, we still need to push for representation of different male bodies in the modeling world. For once, women are ahead of men, and although it feels like we should celebrate, the impact of this exclusion is actually damaging. All types of male bodies should be equally represented, just in the same way we want all types of women’s bodies to be.

Representation is a key aspect of normalizing people's worldview and self image, and by excluding men from the worlds of fashion and body positivity, we're actively damaging the self esteems and self worth of plus size guys.

Men are ultimately privileged in our society due to its patriarchal nature, seeming to benefit from the way their gender is perceived in society and the media as a whole. However, the patriarchy can arguably damage men in a similar way to how women are damaged by it — the hyper-masculinity that the patriarchy demands of males can affect them emotionally, mentally, and physically.

Most guys are not made of the stuff from the covers of cheap romance novels your mom reads on holiday and they don't deserve to be shamed for that.