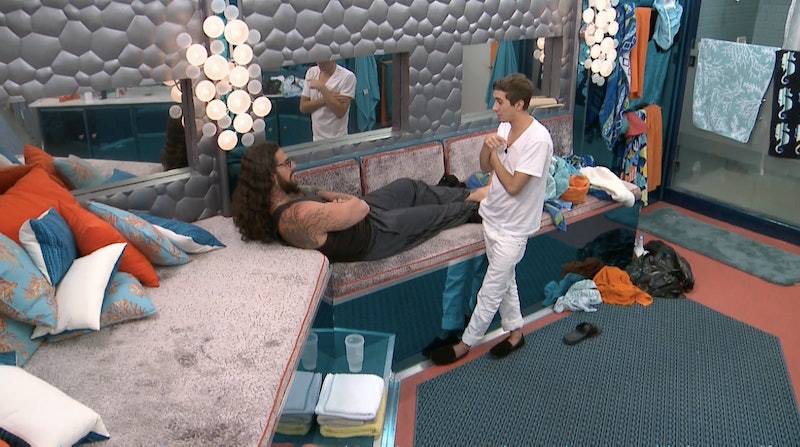 By this point, we can probably all agree that Austin and Liz's Big Brother 17 showmance is ruining his game, but he just keeps making the target on his back bigger and bigger with each passing day. The latest in Austin's screw-ups is confirming to Jason that, yes, Liz has a twin and her name is Julia. I know! Crazy! The one good thing here, if you can really call it good, is that Austin didn't betray Lizia by spilling their secret; Liz knew about it beforehand. Why she didn't object to this is anyone's guess, especially given that secrets spread like wildfire in the Big Brother 17 house. Remember when Da'Vonne and Jason thought about keeping their suspicions of the Twin Twist a secret so they could use it in their gameplay, and it lasted all of five seconds? Right.

In what Austin called "Operation Jason," his big plan was to gain Jason's trust by revealing to him that Liz is most definitely a twin. Jason has been saying for a while now that he'd like to get Austin out of the game, and Austin has probably sensed that. Austin's instinct to get Jason on his side is correct, but he definitely chose the wrong way to do that.

In a late-night conversation on Tuesday, Austin set his plan into motion. He started by appealing to Jason's superfan status, saying that he's watched the show and the live feeds for years. The live feeds cut to the fish at that point, and when they come back, Jason is asking if the twin in the house right now is the one they call Angela, and Austin says yes, it's Liz's twin, Julia.

It seems from their conversation that Austin's approach is to talk about how hard it is to have feelings develop for Liz when she's swapping with a twin every few days. Maybe he thought he'd get Jason's pity? Whatever his plan was, it totally backfired.

For starters, Jason told everyone immediately. There's no way to keep a secret in this house. Among the people he told are Shelli and Vanessa, who are taking this as confirmation of their fears that Austin is a "loose cannon." Even though Austin told Liz about his plan, he didn't bother to consult anyone else in the Sixth Sense alliance.

Another thing this is doing is making Austin look like a total jerk, because everyone is saying that Austin wants to get Julia out and make it to the jury house with Liz.

To be fair to Austin, Jason was actually the one who brought that up when they were talking and Austin said he'd be fine with it. Jason might be taking a page out of Audrey's book there by spreading information that is not totally the truth, but not really a lie either. Of course, that doesn't matter in the Big Brother house, and now Austin's loyalty to his alliance and the twins is being questioned. For more on the alliance shake-ups and lies told this season, check out Bustle's BB17 podcast.

It's tough to see how Austin might survive much longer in the game if nearly everyone in the house is now questioning his integrity. Let's just add this to the list of reasons that Austin needs to give up on a showmance with Liz.