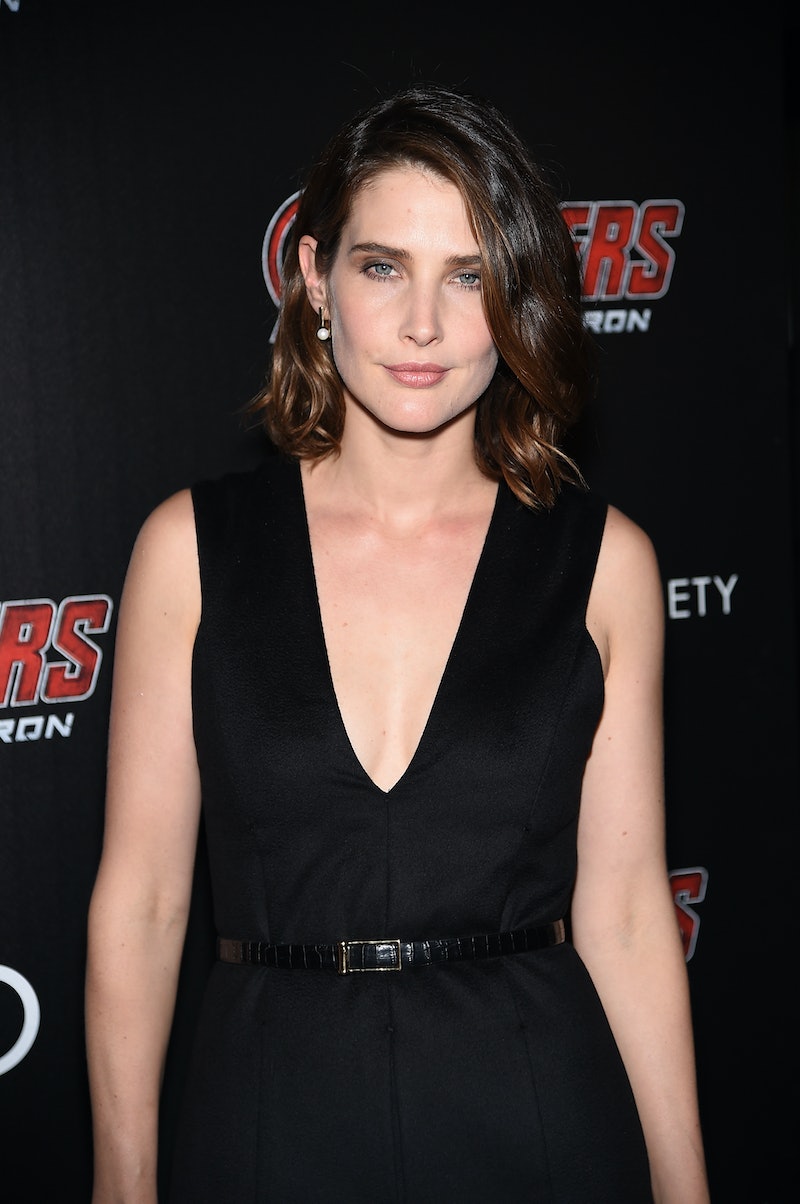 In the new independent film Unexpected , Cobie Smulders plays Samantha, a Chicago high school teacher who finds herself pregnant, much to her surprise. Since learning that she'll be forced to find a new job after her school plans to close at the end of the school year, a pregnancy with boyfriend John (Anders Holm) is the last thing Samantha and John are anticipating or need. When one of Samantha’s star students Jasmine (Gail Bean), reveals she is also pregnant, the two women strike up a companionship that goes beyond the, well, expected. For Smulders, it was the “interesting and unusual friendship” between the two women, plus the issues they discuss, that drew her to the role, she tells Bustle.

“I think previous films dealing with pregnancy haven’t told from a female perspective in terms of a woman having a career and finding that balance between work and raising children,” she says.

A movie about pregnancy is nothing new in Hollywood. Time and time again, films have been made following the crazy ups and downs of carrying a baby for nine months, but rarely do they show the “balancing act," in Smulders' words, of being pregnant while dealing with the rest of a person's life. Smulders, a mother herself, adds that the exact balance is different for everybody, but regardless it can be a real struggle, “especially if you don’t have a great support system.”

Luckily, that's not a problem faced by the actress; she married Saturday Night Live funnyman Taran Killam in 2012. The couple have two daughters, one born in 2009 and the other in 2015. But support systems can go beyond familial ties, as we see in Unexpected (out now), as Samantha quickly becomes a support system for Jasmine.

“I was really interested in the dynamic between these two female characters,” Smulders says. “It was a relationship that I had never tried to play on-screen [and] I thought would be interesting to see develop through the film.”

Samantha and Jasmine don’t have much in common except for their pregnancies; Samantha is a teacher in a serious relationship, and Jasmine is a bright high school senior. Yet this all changes when their lives converge, and while the movie is much more about support and leaning on each other than it is about Samantha teaching Jasmine lessons, the two do connect over going through the same ups and downs together.

Smulders' character, being a teacher, wants to help her students as much as possible, the actress says. So she tries to educate Jasmine, determined to provide her with the necessary information for handling a pregnancy.

“She can’t help every one of the students, but she could help this one,” Smulders says.

The star says that she, too, had a "Samantha" in her life at one point, although her mentor didn’t come until later in life.

“I didn’t really have anyone in the high school level that I’m locking onto now,” Smulders says. “When I started How I Met Your Mother , we had a director whose name is Pam Fryman, and she directed practically every one of our episodes — we had over 200. She was very much a strong female presence in my life, and I would like to be like she is in terms of the grace she has, the people she works with, and the way that she raised her family. She’s somebody that I really look up to.”

It's easy to see Fryman's influence, at least in terms of work ethic; in addition to Unexpected, Smulders has several movies in the works and a role on ABC's Agents of S.H.I.E.L.D. , playing Maria Hill. She reprised the part in this summer's Avengers: Age of Ultron , a movie that, thanks to its huge (an estimated $250 million) Marvel budget, couldn't be more different than Unexpected. Money isn't the only thing that separates the two films, either; in Unexpected, unlike Avengers, Smulders is the vehicle of the film, moving the story forward through her personal narrative (though she says humbly, “It doesn’t feel like my movie.... [it felt like] we’re all in it together, and I’m just around a lot more.”)

Yet when asked to choose between the two types of films, Smulders surprisingly says that she likes the big group dynamic more.

“I love doing ensemble stuff,” she says. “I actually sort of prefer it because it’s kind of terrifying being in every scene because you’re like, ‘Oh, I’m in every moment of this movie!’”

Still, she says that she loves having both types of experiences, and that she embraces the unexpected things that happen "every day" of her life as a result.

“I have a job that’s constantly changing and you’re sort of at the mercy of many different things," Smulders says. "I think change is good, and it’s exciting to be in a place where things are shifting and not everything stays the same.”