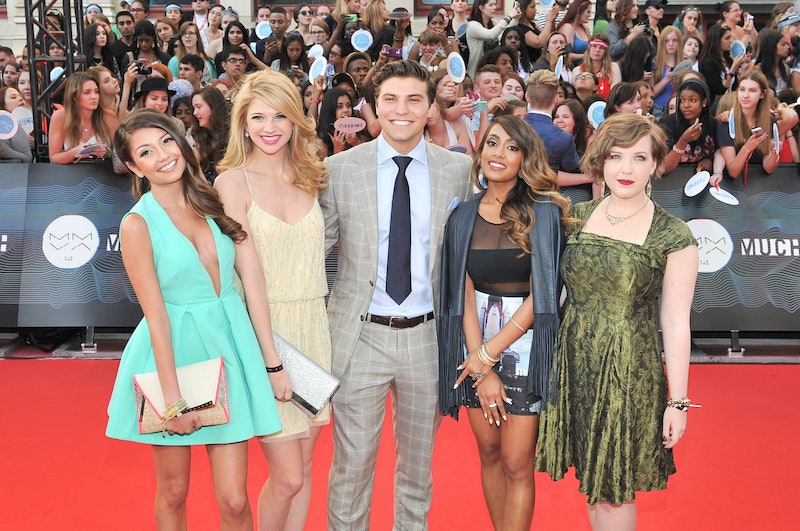 It's been a real roller coaster ride for Degrassi fans. TeenNick announced that the network had officially cancelled Degrassi: The Next Generation after 14 seasons this summer, which sent all loyal viewers of this Canadian soap into a spiral of outrage. Fortunately, everyone calmed the heck down when it was revealed that Degrassi would live on as Degrassi: Next Class on Netflix. So take a deep breath, Degrassi loyalists. While not every character will be returning, the show will live on.

The real question here is now when it will live on. It seems that we'll have a while to wait before the new season has its Netflix debut, as currently the streaming service is listing Next Class for "early 2016." But that shouldn't make anyone too unhappy. After all, you still have all of Season 14 to marathon and plenty of characters to catch up on. Degrassi began airing its final summer season on TeenNick on July 20, with a new episode every single weeknight. There are 12 episodes total in the summer season, which includes a two-part finale on July 31. If you haven't been watching the new season in its final run on TeenNick, don't worry — the network also streams the episodes online, so you have pretty much no reason not to catch up.

As exciting as the prospect of a Degrassi may be, that vague early 2016 premiere date means that there could be six whole months between the end of Next Generation and beginning of Next Class.

It's unfortunate that we'll have to go that long, especially because the actual timeline of the series moves pretty slowly, with each season of Degrassi typically taking place over the course of a high school semester. But perhaps the best thing about this new Netflix arrangement is that it actually mirrors the way TeenNick has been airing Degrassi for years now.

The final summer season of Degrassi isn't the only one to "burn off" episodes over the course of two or so weeks — it's fairly normal for Degrassi to air chunks of episodes all at once instead of spacing them out each week. Because of that schedule, Degrassi also tends to be a show that fans marathon: if you miss it when it airs, then you can always catch up on all of the episodes on TeenNick's website. (It's how I watched Degrassi for years when I was cable-free in college.)

Don't fret, Degrassi fans. We still have more TeenNick episodes to go, and you can spend your six month drought re-watching some of your old favorite episodes before Next Class shows a whole new side of Degrassi.