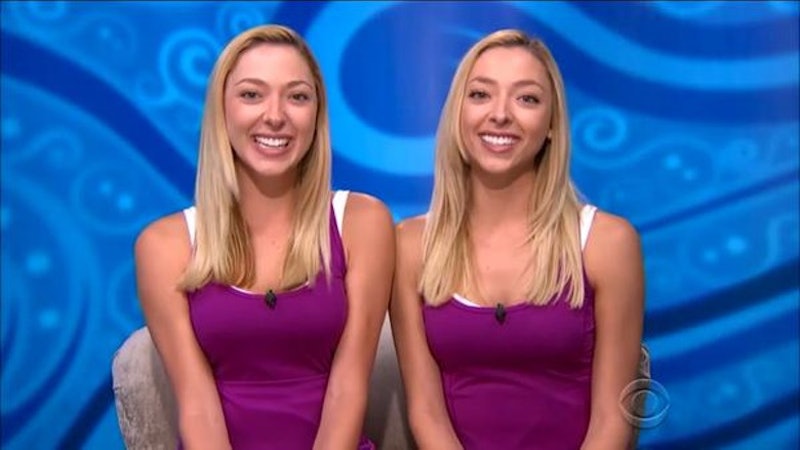 Trouble is a-brewing on Big Brother showmance island as the twin twist begins to backfire on Austin, the largest twin enthusiast in the house. Austin started off as a strong player but was easily distracted from his game by the fairer sex. Unfortunately for him, he fell for the girl with the secret, identical twin sister. Austin loves Liz and thus he's forced to deal with Julia. But how does Julia feel about Austin on Big Brother 17 ?

Austin vowed to keep his twins safe but as he falls for Liz, he pushes away her twin sister, Julia. It only made sense that the Liz/Austin/Julia relationship would sour when both twins entered the house and that time has finally come.

Julia — like the rest of the Big Brother house and America — can see that Austin is distracting her sister from what's important. Julia also suspects that Austin is two-faced. I'm glad at least one of the twins still has her female intuition about her. We know it, the BB house knows it, Julia now knows it, and Liz will soon know it too — Austin is bad news. Let's just hope the plan to backdoor Austin works out so the twins can continue on in the game sans distraction..

Julia Is Stand-Offish With Austin

I would be too if I were Julia. This dude is totally throwing off her sister's game.

And with good reason, as he's actively campaigning to get Julia out of the house so he can have Liz to himself.

Vanessa reveals Austin's secret plan to abandon Julia once the twins enter the house to compete on their own as individuals.

You stab her back, she stabs yours.

Julia Gives The Go-Ahead To Sell Austin Out

Thereby solidifying the target on his back.

And so does the rest of the house. Sorry, Liz.

For all the up-to-date info on the Big Brother cast, as well as everything else going on in the house, check out Bustle’s very own Big Brother podcast, The Diary Room. Listen to the latest episode below, and be sure to check out future episodes on Bustle’s SoundCloud page.