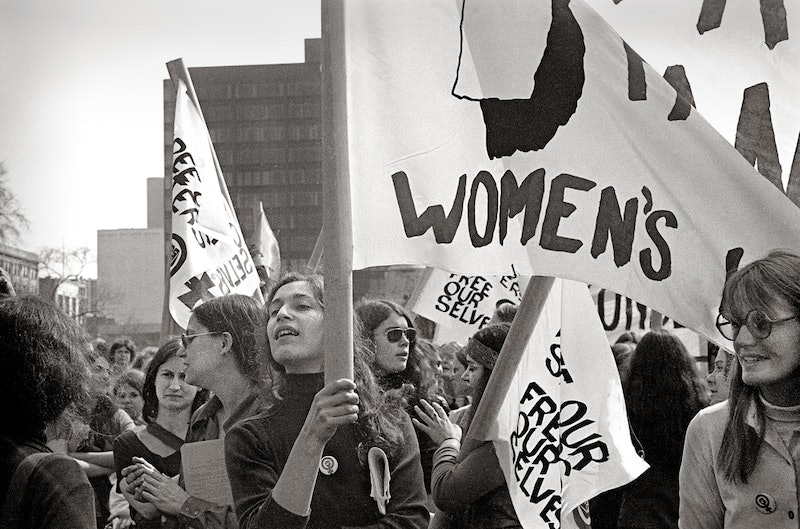 Happy Women's History Month! According to its official government website, March officially became known as Women's History Month back in 1987, extending the celebration of women's contributions to all aspects of American history beyond its original one-week duration. There are many active ways to acknowledge this special month, from volunteering for an organization that serves women and girls to advocating for women's rights to boosting the signal of important work that women have done and are currently doing to improve lives. But there are also ways you can mark this important month in your free time to relax, by kicking back with one of these 18 Netflix movies to watch during Women's History Month.

Informative documentaries will give you historical context for the current state of gender equality in this country. Female-fronted dramas and comedies will remind you that, though there's still a great imbalance in the industry, women's stories are being told and told well in film. Biopics and profiles of extraordinary women will inspire you to always try for more. These Netflix movies are your cinematic homework for Women's History Month.

Carey Mulligan, Helena Bonham Carter, and Meryl Streep star in this 2015 drama about English suffragettes fighting for the vote in 1912. Most of the characters are composites of real people or fictional creations, but Streep’s character, Emmeline Pankhurst, was a very real and significant English activist.

This 2019 documentary follows the Steubenville rape case, which tore a small town apart, leading to a battle between parents, school officials, a crime blogger, football culture, and the hacker group Anonymous that unfolded for the world to see. It’s a case and a doc worth learning about, as its grim outcome shows just how far we still have to go for equality.

On the more lighthearted side, there’s Julie & Julia. Amy Adams plays Julie, a woman trying to figure out her life, while Meryl Streep takes on Julia Child, one of the most successful chefs and television personalities in TV history. Streep’s portrayal is so much fun to watch and this movie will make you exceptionally hungry, so plan snacks.

4. The Life and Death of Marsha P. Johnson

Marsha P. Johnson was a transgender hero as well as a hero integral to Black history. This Netflix doc explores her life and death, which was first ruled a suicide before activist transgender communities began digging into her story.

Based on true events set in 1928, teenage sisters Bessie and Jo paint glow-in-the-dark watch dials at the American Radium Factory and uncover a corporate scandal. Bessie and the “Radium Girls” file a lawsuit against the company; a notorious case that ultimately led to changes in workplace health and safety laws as well as the study of radioactivity.

6. Feminists: What Were They Thinking?

This documentary takes a look at the women's movement of the 1970s through the collection of feminist portraits captured by photographer Cynthia MacAdams. Forty years later, this film looks at the culture then and now, and features some of the era’s feminist icons like Jane Fonda, Lily Tomlin, and more.

Mercury 13 tells the remarkable true story of the women who participated in NASA’s experiments in the space race. Dubbed the “Mercury 13,” these women did everything that their male counterparts, the “Mercury 7,” did, but were never allowed to travel to space.

You read The Diary of Anne Frank in middle school, so it's about time that you revisit it. Helen Mirren retells Frank’s tragic yet inspiring story alongside five other Holocaust survivors.

9. Knock Down the House

The 2018 midterm elections led to a record-breaking 127 women serving in Congress. (That record was broken again in the 2020 election). This doc revolves around the 2018 Congressional primary campaigns of Alexandria Ocasio-Cortez, Amy Vilela, Cori Bush, and Paula Jean Swearengin.

Carey Mulligan stars in this historical biopic as Edith Pretty, a widow who decided to dig up the mounds on her vast property only to facilitate one of the greatest archeological discoveries in history: the Treasures of Sutton Hoo.

This doc is based on former First Lady Michelle Obama’s memoir of the same name. The film follows her on her book tour and features interviews with Oprah Winfrey and Stephen Colbert, as well as footage of her childhood and life as she tells it in the book.

This PBS doc explores the life and work of the iconic Betty White, from her early days as a female pioneer at the dawn of television, to The Golden Girls, Saturday Night Live, and beyond.

This biopic follows Australian singer Helen Reddy, who fights against the misogyny of the music business in the 1960s until she finally writes a song that would become “I Am Woman.” If you’ve ever wondered where the phrase, “I am woman, hear me roar,” comes from, watch this.

Athlete A follows the story of the investigative reporters, gymnasts, parents, and former Olympians who came together to bring down Dr. Larry Nassar, who was accused of sexually abusing hundreds of girls and in the process exposed an entire system of corruption at the hands of USA Gymnastics.

Dolly Parton leads this musical journey of a film that highlights those who helped shape her and her career through the years. The result is a moving picture of a feminist icon.

Since every month should be Women's History Month, feel free to enjoy these Netflix movies all year round.

This article was originally published on March 6, 2017