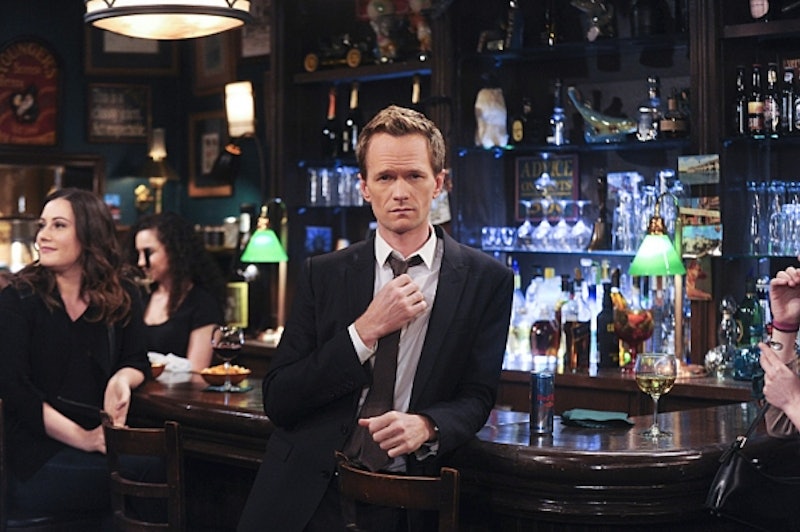 Love him or hate him, Barney Stinson was one of the most popular characters on How I Met Your Mother. So when the time came to end the series, the pressure was on to get his sendoff right — particularly because there were a lot of worrisome theories that he wouldn’t make it to the end of the show alive. As it turned out, though, fans were worried about the wrong thing: though Barney survived, he and Robin got divorced and he had a baby with a stranger.

A few short weeks before the series finale, Barney and Robin’s marriage fell apart. In the same episode that showed the two’s wedding reception (Episode 22, “The End Of The Aisle”), we saw their divorce just three years after tying the knot. Apparently, Robin's constant traveling for work took a toll and Barney was struggling with the distance. That's why they drank so much in the "Rally" flash-forward — to avoid their emotions just before making the decision to split.

A few years later, Barney changed forever. After engaging in what he considered “The Perfect Month” — ie sleeping with 31 women in 31 days — one of his partners ended up pregnant. At first, Barney responded terribly, denying paternity and insisting his life was over. But after laying eyes on his new daughter Ellie, things finally snapped into perspective for the longtime womanizer. “You are the love of my life. Everything I have and everything I am, is yours. Forever,” he told her.

Ultimately, it didn’t matter that Barney never got back together with Robin — or that we’ll never know the name of the mother of his baby. Seeing his growth as a person and parent was a good enough ending.

Things didn’t got as swimmingly for the other characters. In a widely controversial ending, Ted got together with his kids’ mother — yes, the woman from the train — only to have her later pass away. By the time he finished his story, his kids had realized the truth: Ted was in love with Robin. They encouraged him to go to her, and he arrived at her apartment with the blue french horn. The show ended with them getting back together.

This prompted outcry from fans, who felt it was a cop-out, but Neil Patrick Harris — who plays Barney — has since defended the decision. “It wasn’t necessarily the happy ending that people were expecting,” he said on The Late Show in 2014. “But Carter [Bays] and Craig [Thomas], who were once writers on your show and the EPs and creators, knew this ending years ago and had played towards that. And I was a big proponent of it and a big fan of it.”

He added that he was happy with Barney’s ending, too. “Sometimes, people’s growth doesn’t really mean that they grow up. There are certain people who you want them to get into a solid relationship and really settle down and learn from things. And you want Barney to be the guy you can bring your mom home to — but Barney’s the guy who wants to bang your mom,” he said. “At the end of the day, it’s not always meant to be that way.”

More like this
Wait, Is Barney Stinson Related To Sophie On 'HIMYF'?
By Gretchen Smail
The Song At The End Of 'The Last Of Us' Ep 1 Has A Deeper Meaning
By Sophie McEvoy
This 'Gossip Girl' Wardrobe Error Has Gone Viral On TikTok
By Alyssa Lapid
All The ’70s Easter Eggs You Missed In 'That ’90s Show'
By Grace Wehniainen
Get Even More From Bustle — Sign Up For The Newsletter
From hair trends to relationship advice, our daily newsletter has everything you need to sound like a person who’s on TikTok, even if you aren’t.

This article was originally published on April 1, 2014