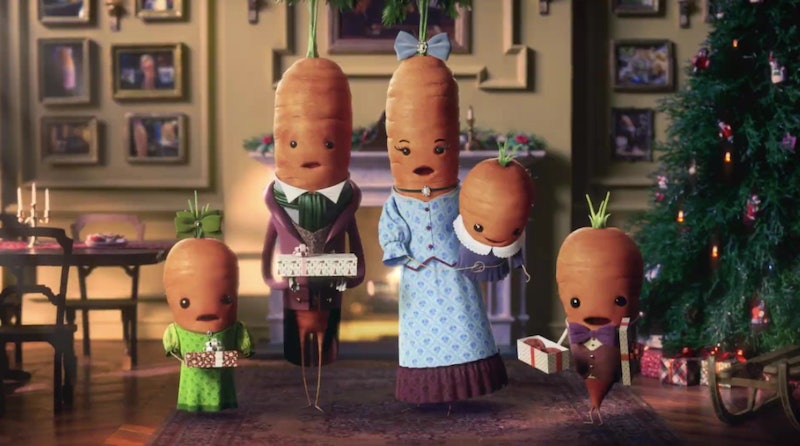 It’s battle of the supermarket Christmas ads and Aldi has pulled out all the stops. Starring Ebanana Scrooge (who is – you guessed it – a banana dressed up as the classic Charles Dickens character) alongside Aldi’s very own Kevin the Carrot and a whole host of other anthropomorphic fruit and veg, the supermarket’s Christmas ad is a pun-filled festive adventure.

Much like his Dickens counterpart, Ebanana is thoroughly displeased about Christmas joy and wants no part of it. However, a visit from Kevin the Carrot changes all that when he shows the grumpy banana that happiness comes from being kind to others.

The theme of the ad ties in with Aldi’s new Christmas campaign which has seen them part with Neighbourly, an app that helps local businesses do good in their community. In partnership with Neighbourly, Aldi has pledged to donate 1.8 million meals to families over the Christmas period.

The supermarket also enlisted the help of footballer and campaigner Marcus Rashford to take their Christmas advert to the next level. Over the last 18 months, Rashford has worked tirelessly to help families through his free school meals campaign.

In the advert, Rashford (or Radishford, as he is known) can be seen kicking a Brussel sprout in the snowy streets as Ebanana and Kevin the Carrot fly through the night sky. “Christmas is a time of peas and goodwill” the carrot tells Ebanana, before Rashford can be heard saying, “Merry Christmas, Kevin!”

Rashford took to Twitter on November 10 to express his delight at the advert. “Well done @AldiUK. This is much bigger than a Christmas ad. Might not be Oscar-worthy but glad I could play my part.”

Also in the advert, Aldi couldn’t resist poking fun at their legal dispute with Marks and Spencer. The two brands went head to head earlier this year when M&S sued Aldi for their Cuthbert the Caterpillar cake, which they believe was too close in design to Colin the Caterpillar.

In the advert, a handcuffed Cuthbert can be seen being walked down the street by two lemon police officers – much to the delight of viewers. “I’ve got a lot of time for Cuthbert the Caterpillar getting arrested in the background of the new Aldi Christmas ad,” wrote one on Twitter, while another said, “Dead at Aldi putting Cuthbert the caterpillar getting arrested in their Christmas ad.”

Elsewhere on Twitter, users have praised the advert more generally for its message about kindness. One even declared “Aldi have won Christmas, by far the best advert for 2021.”