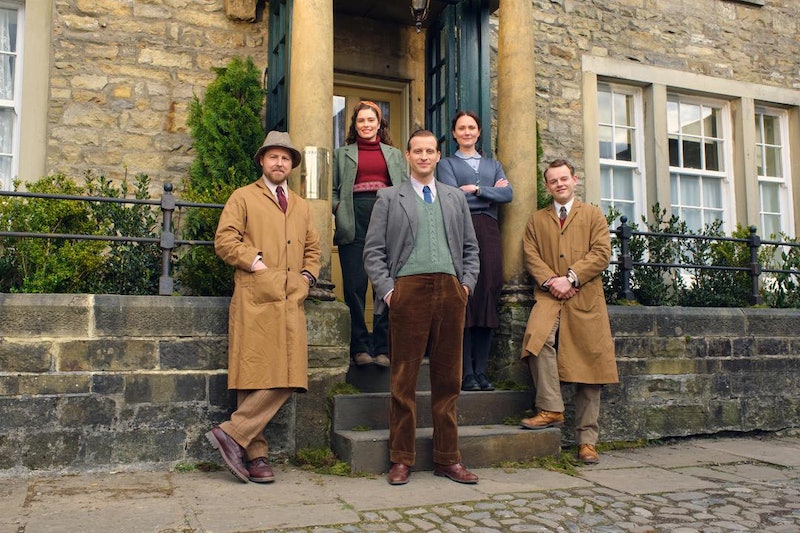 All Creatures Great and Small is welcoming viewers back into the 1930s Yorkshire Dales, with an exciting Christmas special. The Channel 5 reboot of the BBC classic from the 1970s has been an overwhelming success, and is back for another Christmas-themed one-off.

The show is based on the memoirs of veterinary surgeon and writer James Heriot (Nicholas Ralph), as he lives and works in rural Yorkshire in the 1930s and 40s. The revamped version of the show debuted on Channel 5 in September 2020, and quickly racked up the highest viewing figures for the broadcaster in almost five years.

Once Helen left Hugh at the altar, it was only a matter of time until she and James got together. In the season two finale, viewers gushed over James and Helen’s engagement, after taking their relationship slow. But, can we expect to see their nuptials take place in the Christmas special, or will something go wrong for the happy couple? The second series was set in 1938, just a year before the Second World War broke out. It’s clear the people of Darrowby are nervous about the prospect; in the final episode, Prime Minister Neville Chamberlain is said to have entered a number of peace talks.

All Creatures Great and Small made a comeback on Channel 5 in September 2020.

Fan theories suggest that the wedding will take place in the special, whereas others worry that James and Tristan will be enlisted in the war efforts by the end of the episode. However, Callum Woodhouse, who plays Tristan, confirmed to Radio Times that the wedding will not be happening over the festive season, and teases the possibility of it taking place in a potential third season. “I quite like the idea that it’s not straight into the wedding.” Woodhouse stated, adding: “It’d be quite nice for that to be, you know – if we are lucky enough to get a series three, then that’s going to be one of the things that happens.”

In the trailer for the upcoming yuletide treat - released Dec. 14 - revealed romance is on the cards for Tristan, as he shares a mistletoe kiss with local barmaid Maddie.

The All Creatures Great and Small Christmas special airs on Tuesday, Dec. 22 at 9 p.m. on Channel 5.

More like this
Kenneth Branagh Looks & Sounds *Exactly* Like Boris Johnson In 'This England'
By L'Oréal Blackett and Rachel Mantock
'His Dark Materials' S3 Features A Character That Isn't In The Books
By L'Oréal Blackett and Rachel Mantock
Watch The Emotional Trailer For Dolly Alderton’s 'Everything I Know About Love'
By Bustle UK
We’ve Got A Text! 'Love Island' 2022 Finally Has A Release Date
By Sam Ramsden and Frances Stewart
Get The Very Best Of Bustle/UK