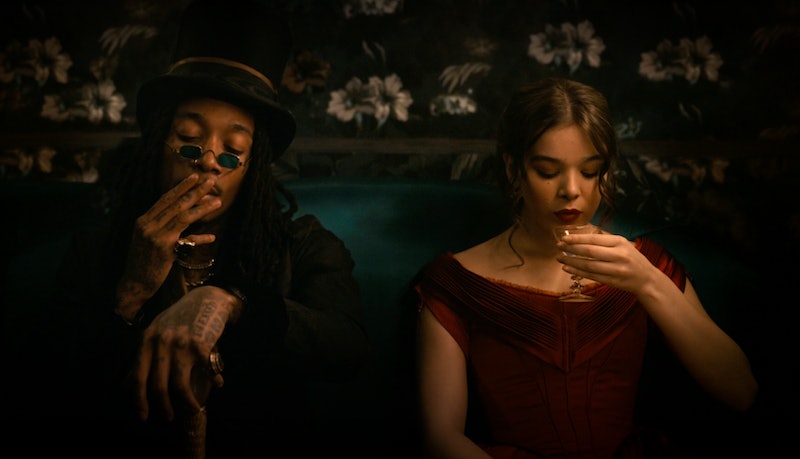 Over a year since its first season, new episodes of Dickinson have finally hit Apple TV+. The period dramedy follows a young Emily Dickinson, portrayed by Hailee Steinfeld as an outgoing, opium-using, and rule-breaking aspiring poet, as she learns to navigate adulthood. The second installment premiered on Jan. 8, and just like last season, it features an eclectic set of music from both high-profile and left-of-center artists, like Wiz Khalifa (who plays the physical embodiment of Death on the show), Maggie Rogers, and many more.

Alena Smith, the creator of Dickinson, spoke to Vulture back in 2019 about meticulously choosing music to accompany Emily's "radical" and "misunderstood" personality. “This was not going to be a bunch of wilting, floral, perfumy songs. I wanted it to be in-your-face, badass, rager songs because I feel like Emily is raging inside," Smith detailed to the publication, noting that she wrote many of the musical choices into the show's scripts so the actors could fully immerse themselves in the world of Dickinson. After taking on the task of choosing music for the entire season and subsequently realizing how much work it is, Smith hired reputable music supervisor Devon Yates. Together, they crafted the modern soundtrack that accompanies the series.

For the second season of Dickinson, which airs through the end of February, Smith and Yates put together a blend of mainstream and underground music, including club bangers from Cakes Da Killa and Sofi Tukker as well as synth-laced tracks from Gus Dapperton and Superorganism. Apple Music released a playlist of selected tracks from the season, and it's available to stream on the platform. Check out the full list of songs and artists featured in each Season 2 episode below.

More like this
At 28, Sharon Horgan Was Hoping To See Damon Albarn At The Pub
By Samantha Rollins
Maxim Baldry Plays This Pivotal Role In 'The Lord Of The Rings' Universe
By Maxine Harrison
'School Of Rock' Changed Joe Keery's Life Forever
By Alyssa Lapid
Devi Is Going To Meet A “Smoldering Bad Boy” In ‘Never Have I Ever’ Season 4
By Jack Irvin and Gabrielle Bondi
Get Even More From Bustle — Sign Up For The Newsletter