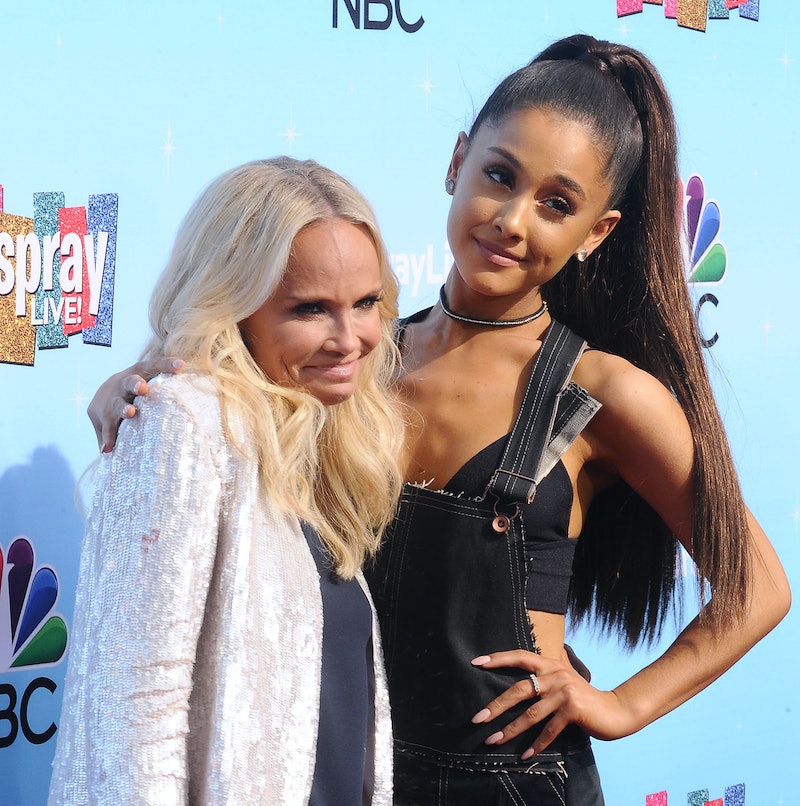 Ariana Grande is in an Oz state of mind. The “7 Rings” singer was cast as Glinda in the upcoming Wicked movie in November 2021 alongside Cynthia Erivo’s green-skinned Elphaba. And since then, fans of the original Broadway show have patiently awaited its release. It seems like fans are getting tantalizingly close to a release date.

On Jan. 20, Grande posted a TikTok from the set of her singing an Oz classic — this time from the original 1939 Wizard of Oz film. In a chunky pink knit sweater, Grande crooned an angelic a cappella version of “Over the Rainbow,” originally sung by Judy Garland. “Wanted to sing you a little something but don’t want to sing anything that is not ‘Ozian’ at the moment :) keeping to my little bubble for now … done with lots of love,” Grande captioned the TikTok video.

Entertainment Weekly confirmed that Grande is currently in the middle of filming, so the blonde locks she tactically kept hidden under her hoodie were likely part of her Glinda the Good Witch costume.

The following day, Broadway’s original Glinda, Kristin Chenoweth, also took to TikTok in her fluffiest pink outfit to duet Grande’s video. “You know I had to duet this one. over the [rainbow] with my baby girl,” the video’s text reads. Harmonizing with Grande, the Broadway vet captioned the TikTok, “Just two Ozians.”

“I love you with all my heart,” Grande left a reply in the comments section. “Baby! It’s mutual,” the Wicked alum responded.

Chenoweth proudly passed the torch to the young singer when she was first cast as Glinda. “I’m not sure if I’ve ever been this proud. From the very first day I met you, you were destined for this role,” the Pushing Daisies star tweeted.

The two of them go way, way back. They met when Grande was just eight years old and fangirling over Chenoweth at a Wicked show, the musical adapted from Gregory Maguire’s novel. Chenoweth quickly felt like a mentor to the budding singer, especially after they started working together, first on the set of Hairspray Live! back in 2016.

In 2018, she joined Chenoweth for the 15th-anniversary special of Wicked but took to singing an Elphaba song — “The Wizard and I” — instead, one originated by Idina Menzel. Then in September 2019, the two released a duet of Lesley Gore’s 1963 hit “You Don't Own Me.” More recently, in 2021, when Grande was a judge on The Voice, she invited Chenoweth to be one of her team’s mentors.

Chenoweth is just one of the “Side to Side” singer’s many famous friends. Grande also has an enviable friendship with current It Woman Jennifer Coolidge.

More like this
Beyoncé & Blue Ivy Performed A "Brown Skin Girl" Duet At Her Private Dubai Concert
By Brad Witter
Will Beyoncé Perform At Or Attend The 2023 Grammys?
By Jake Viswanath
Taylor Swift May Miss The 2023 Grammys For Reasons Fans Know “All Too Well”
By Jake Viswanath
Taylor Lautner Thought Taylor Swift's 2009 VMAs Interruption Was A "Skit"
By Alyssa Lapid
Get Even More From Bustle — Sign Up For The Newsletter
From hair trends to relationship advice, our daily newsletter has everything you need to sound like a person who’s on TikTok, even if you aren’t.