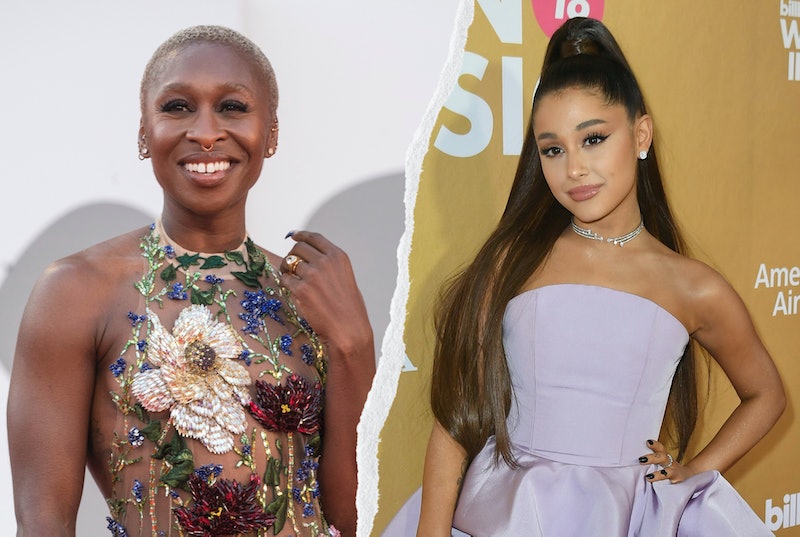 It’s time to start vocalizing. The movie adaptation of the Broadway hit Wicked is finally in the works, and its two witchy leads have just been cast. Broadway veteran Cynthia Erivo, who won a Tony for The Color Purple, will play the green-tinted Elphaba while Ariana Grande, aka Spotify’s most-streamed female artist, will play Glinda (formerly known as Galinda).

Based on the namesake 1995 novel by Gregory Maguire, the Broadway hit musical is a reimagining of the L. Frank Baum classic The Wizard of Oz. In Baum’s work, the green “Wicked Witch of the West” is pure evil (all for the love of ruby slippers). But in Wicked, she has a name — Elphaba — and a moving backstory of being othered by society solely because of her skin color. (Yes, it has relevant themes.) It also follows her friendship with the beautiful Glinda, who was hailed as the “good” witch. The musical is responsible for some of the most beloved Broadway numbers, including “Defying Gravity,” “Popular,” and “For Good.”

Jon M. Chu of Crazy Rich Asians fame is slated to direct the film after coming off of directing another musical adaptation, Lin Manuel Miranda’s In The Heights. He announced the casting on Twitter with “Goooood Newwwws!!!” referencing the first line in the musical. “Get ready for a match up like you’ve never seen!!! In pink and green!!!”

Both Grande and Erivo also posted on Instagram. “Pink goes with Green,” Erivo wrote, with a photo of the flowers Grande sent with a card that says, “Honored doesn’t even begin to cover it i cannot wait to hug you. see you in Oz.” Grande, too, posted on Instagram: “Thank goodness.” Fans know that Glinda is Grande’s “dream role.” Ten years ago on Twitter she wrote, “Loved seeing Wicked again... amazing production! Made me realize again how badly I want 2 play Glinda at some point in my life!”

Idina Menzel, who played Elphaba to Tony award-winning acclaim, congratulated the new leads. “Congrats to two amazing women. May it change your lives for the better forever and ever as it has for us. So much love,” she wrote on Instagram.

The original Glinda, Kristin Chenoweth, also gave her blessing to her successor on Twitter. Reposting Grande’s tweet about wanting to play the Good Witch alongside a throwback photo with a very young Ari, she wrote, “I’m not sure if I’ve ever been this proud. From the very first day I met you, you were destined for this role. Congratulations @ArianaGrande! The best Glinda you will be with Cynthia by your side. I love you!!”

Chenoweth and Grande are long-time fans of each other. Grande, a current judge on NBC’s The Voice, invited the Broadway star to mentor her team. They’ve also previously collaborated on a “You Don’t Own Me” cover.

Of course, the news made ripples all across social media, and fans couldn’t contain their excitement. “Cynthia & Ariana are going to sing for the blood in the Wicked film and THAT is enough to shout about,” one user wrote.

Fans of the “Thank U, Next” singer also couldn’t help but revel in Grande’s full-circle moment. Some even resurfaced videos of Grande as a kid singing songs from the musical.

Some theater lovers saw an opportunity to poke fun at the industry. User @alex_abads referenced Ben Platt’s controversial casting in Dear Evan Hansen’s adaptation, writing, “So it’s okay when wicked casts grown women as teens?” Others joked about how James Corden seems to be in all recent musical adaptations. “I swear to god, if James Corden is not cast as the Wizard in the Wicked movie, I might go see it,” one tweeted.

Memes about Lea Michele also circulated. When asked about whether she was in talks to play Elphaba on Watch What Happens Live with Andy Cohen, the Glee star voiced her interest, saying, “That would be incredible. I’m like backstage painting myself green, waiting for it.”

While fans await the next casting news — there are still tons of roles to fill — we suggest playing the musical’s soundtrack on loop.

More like this
The 'Love, Lizzo' Harry Styles Scene Is Just 1 Moment That Made Fans Feel Seen
By Brad Witter
'Wakanda Forever' Is Already Opening Doors For Mabel Cadena
By Grace Wehniainen
Stormzy Is Here To Remove The Labels Put On Him As A Rapper
By Maxine Harrison
Olivia Wilde & Harry Styles Are Reportedly "Taking A Break" After Almost 2 Years
By Jake Viswanath and Radhika Menon
Get Even More From Bustle — Sign Up For The Newsletter