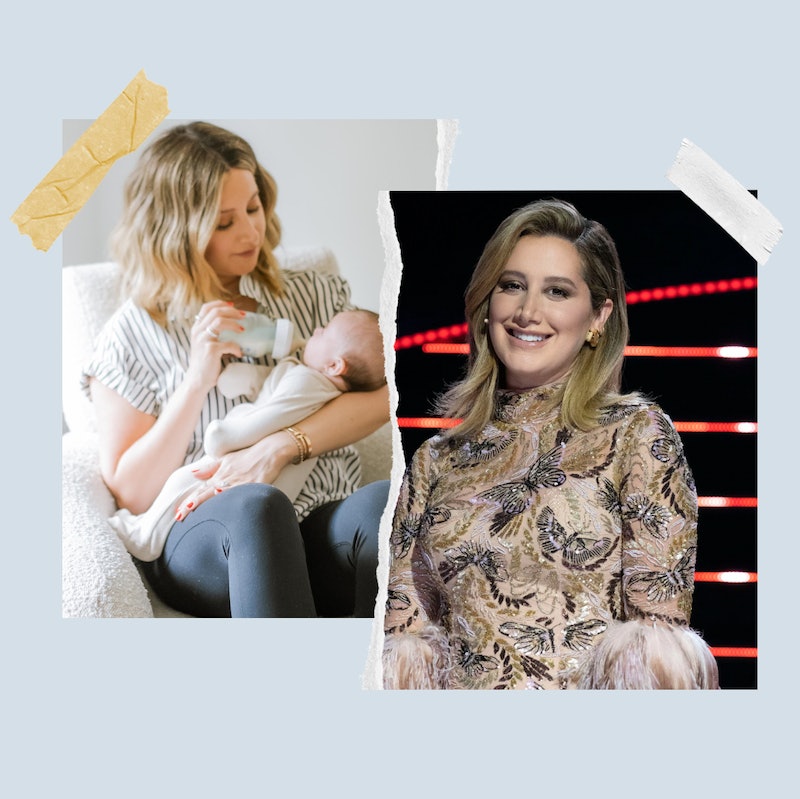 Ashley Tisdale’s life has changed a lot since you last checked in on her. For one, she’s a new mom. Tisdale and husband Christopher French welcomed their first child, daughter Jupiter Iris French, in March. Now, Jupiter is running her world — fitting for a child who shares her name with the biggest planet in the universe — all while she’s contemplating another music comeback and working on Fox’s The Masked Dancer. “Before, obviously, I could just do my own thing,” the High School Musical alum tells Bustle. “But now, my schedule really revolves around her.”

If it feels weird as a fan seeing Sharpay Evans as a mom, imagine how it feels for Tisdale’s friends, who rarely saw her pregnant due to to the star locking herself in during the COVID-19 pandemic. “To kind of go from that to like, ‘I have a baby!’ It’s so crazy for people,” she says, laughing. This made their reunions even sweeter, particularly when it came to her HSM co-star and longtime BFF Vanessa Hudgens, whom Jupiter embraced when they met for the first time.

“She doesn’t know to [hug],” Tisdale explains, mimicking Jupiter’s arms reaching out. “She doesn’t even do it to me, but she literally saw Vanessa and was like, ‘Oh my god,’ reached out to her, and I was like, ‘I’ve never seen her do that!’ It was so wild. She loved Vanessa, I think she just knew how much Vanessa means to me. They were so cute together, and Vanessa just kept tearing up the entire time because it was so wild ... because this year, you just don’t see friends, and I saw Vanessa maybe once or twice that year, which is very rare for us.”

As a mother, not only has Tisdale’s life been upended in the best way, but she’s also learned new life lessons along the way. At only 4 months old, Jupiter has already instilled “patience” in her famous mom, especially when it comes to adapting to unexpected situations, like when Tisdale had to switch to Enfamil’s formula Enspire after their breastfeeding experience didn’t go as anticipated. “I think that’s constantly something she’s teaching me, is that you have to let go of what you think might happen,” Tisdale says. “There’s times where we’ll be like, ‘Let’s go out for breakfast, and have an amazing meal,’ and she’s hysterically crying the entire time, and you’re like, ‘Why did you think it’d be so much easier?’ She’s just teaching me that you have to be in the moment.”

Now that Jupiter has “arrived earth side,” as Tisdale described on Instagram after her birth, the 36-year-old star is looking a bit toward the future. She just finished a judging stint on the debut season of The Masked Dancer, a Masked Singer spinoff, where she proudly proclaimed herself “the worst” at guessing contestants’ celebrity identities. “I think I mentioned Will Ferrell for one,” she remembers. “I thought he was the sloth because he did the ribbon dancing. It reminded me of Old School, and I was like, ‘It is Will Ferrell.’ The best part was, I knew I wasn’t the best at guessing, but I loved how committed I was to thinking it was them.”

Tisdale is pursuing new roles with a different mindset, knowing that Jupiter is waiting at home. “Instead of veering off and being like, ‘Oh, well. I’ll do this [project] instead,’ if that’s what I want to do, I want to go for it, because otherwise I’m taking time away from my baby,” she says. “I have really wanted to push myself out of my comfort zone and do things different. People have known me for a long time on sitcoms, so a dream of mine would be doing a single-camera comedy, maybe a dark comedy, something a little bit more grounded than things I’ve done in the past.”

While Tisdale’s eyes are on her precious present and limitless future, that doesn’t mean she isn’t looking at the past just a little as well for inspiration. After making her music comeback with the 2019 Symptoms album, a concept record that saw her open up in detail about her struggles with anxiety and mental health, the singer is getting the itch to return to the bubblegum pop sound that defined her 2000s albums Headstrong and Guilty Pleasure.

“When I don’t hear something and I miss something, I’m like, ‘Gosh, I really wish there was more pop music,’” she says. “I’d probably go back to my roots with the pop music and do something that was very ‘He Said She Said.’ I think that would be fun.”

While she doesn’t often return to those (highly underrated) breakout albums — “Could you imagine if I was like, ‘I rock out to myself all the time?’” — Tisdale still remembers how she felt making them and the value they hold today. “They really just represent me growing up,” she says. “I think that those two albums ... I went through a lot of relationship stuff and I was in my young 20s, so I think they really reflect where I was and what stage of life I was in.”

If her new stage of life with Jupiter is any indication, get ready for a wiser, mature Tisdale that still knows her way around a classic pop jam.