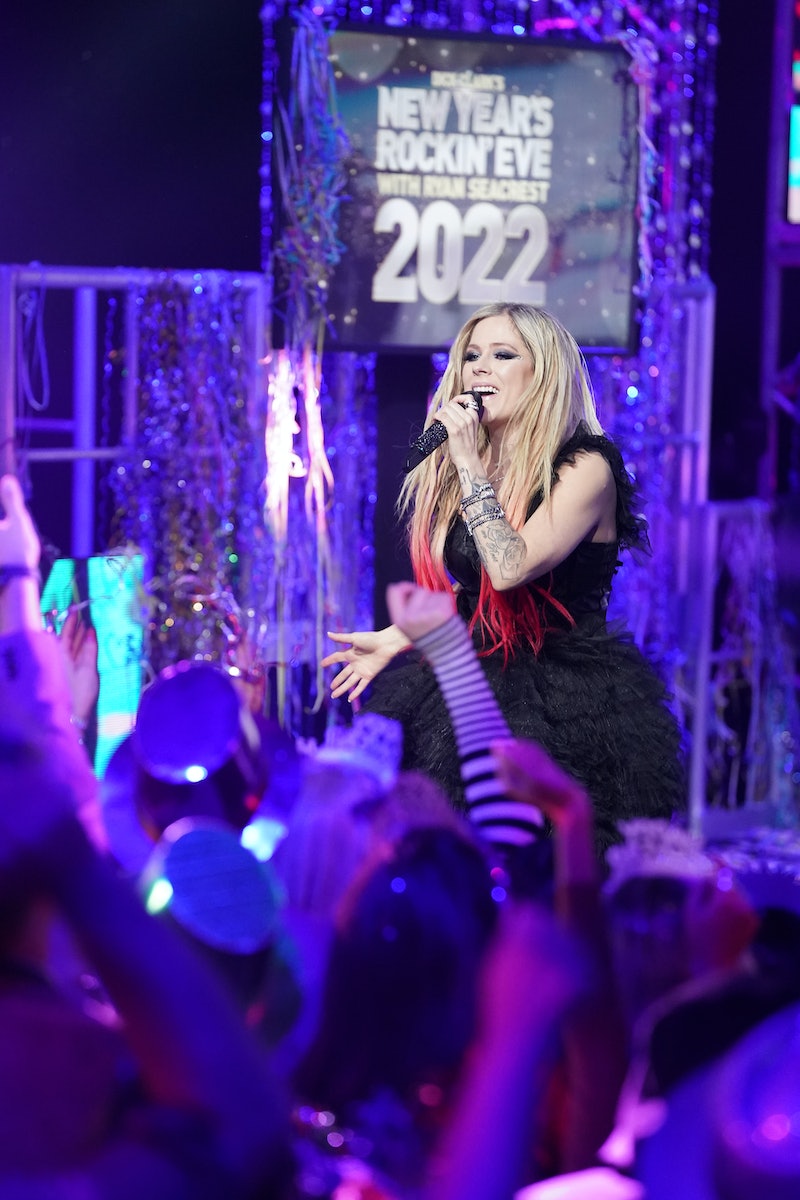 Hours before 2022, Avril Lavigne and Travis Barker gave viewers a nostalgic reminder of a simpler time — like, 20 years simpler. As part of Dick Clark’s New Year’s Rockin’ Eve with Ryan Seacrest, the musical duo delivered a lively performance of Lavigne’s early-aughts fave “Sk8er Boi,” and it was almost enough to make fans forget what year we were heading into, especially as the performance followed fellow musicians from the era. “Ja Rule, Ashanti, and Avril Lavigne? We're trying to go back to 2002 instead of 2022 and I'm fine with it,” wrote Twitter user x3bec.

As Los Angeles host Ciara pointed out, this was Lavigne’s first time performing for the show since 2011, when she sang “Girlfriend” and “What the Hell.” Since 2021 has seen the singer-songwriter return to her pop-punk roots in a major way, it was only fitting that she chose “Sk8er Boi” to ring in the year ahead. Barker, who’s had a pretty big year himself, joined in on drums — but the collab wasn’t just a nostalgia-fueled reunion. Yes, Lavigne and Barker worked together on 2007’s The Best Damn Thing, but they’ve partnered up more recently, too.

In November, Lavigne signed onto Barker’s record label DTA Records — days before dropping the single “Bite Me,” on which Barker served as drummer and co-producer. So rest assured, “Sk8er Boi” will likely not be the last we see of the musical pair in action.

But until their next team-up arrives, the performance was the perfect way for nostalgic pop-punk fans to wrap up another very (sigh) unprecedented year.

After the performance, Lavigne and Barker spent some quality time with their respective partners — and shared the love on Instagram. For Lavigne’s part, that meant cozying up with boyfriend Mod Sun. On his story, the musician posted a snap of the pair, captioned “Happy new year from me + this Angel.”

Meanwhile, Barker joined fiancée Kourtney Kardashian for a catered New Year’s Eve dinner, as evidenced by the delicious goodies shared on both of their stories.

More like this
Hilary Duff's Husband Matthew Koma Has Her Name Tattooed On His Butt
By Jake Viswanath and Stephanie Downs
Britney Spears Shares & Deletes Photos Of Justin Timberlake From 22 Years Ago
By Jake Viswanath
Victoria Beckham’s Spice Girls Audition Was V. Theatrical
By Sam Ramsden
Twitter Can’t Believe The Madonna Biopic Is Scrapped & Fans Have A Solution
By Alyssa Lapid
Get Even More From Bustle — Sign Up For The Newsletter
From hair trends to relationship advice, our daily newsletter has everything you need to sound like a person who’s on TikTok, even if you aren’t.