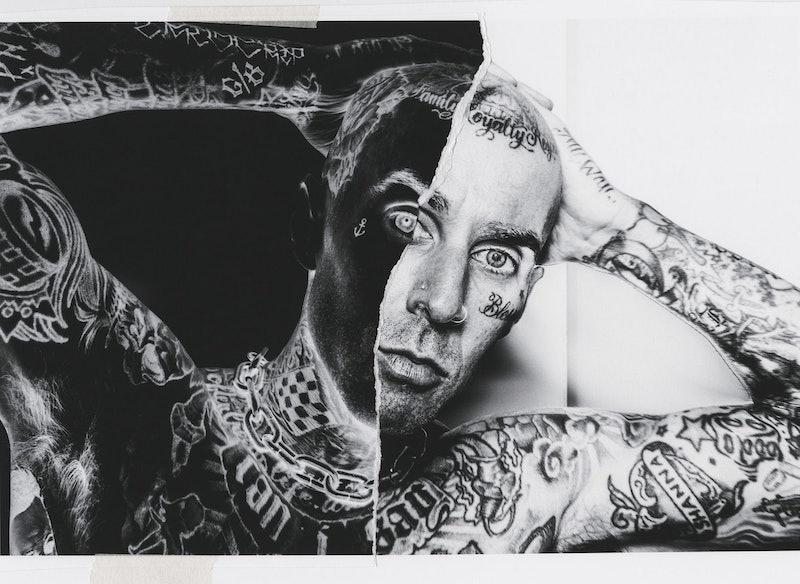 Travis Barker can do anything as long as Kourtney Kardashian is by his side. In a new interview with NYLON, the Blink-182 drummer revealed what it was like taking his first flight in 13 years after surviving a deadly crash that killed his assistant, his security guard, and the aircraft’s two pilots. “I didn’t even know I was going,” Barker said of the couple’s recent trip to Cabo San Lucas, Mexico. And although he “never considered flying again” after that near-fatal experience in 2008, being in a relationship with the 42-year-old Poosh founder made him reconsider.

Barker documented himself overcoming his greatest fear on Instagram, where the couple shares everything from steamy vacation photos to NSFW birthday tributes. “With you anything is possible,” he wrote alongside a photo of him making out with the reality star in front of Kylie Jenner’s private KylieAir jet. Since then, they’ve traveled to many other places together by plane, including Italy and France. “Forever isn’t long enough,” Barker wrote on next to a photo of the pair at the Eiffel Tower on Sept. 3.

Fans were surprised Barker got back on the plane after being involved in such a traumatic accident all those years ago. Barker and his late friend DJ AM, who died in 2009 of a drug overdose, were on their way home from a show with other personnel when the plane’s tires blew during takeoff. Barker suffered third-degree burns and struggled with PTSD and survivor’s guilt. In May, he told Men’s Health that it was hard for him to even go outside after the crash.

“I was dark,” he said, adding that he was unable to sleep for weeks. “I couldn’t walk down the street. If I saw a plane [in the sky], I was determined it was going to crash, and I just didn’t want to see it.” The musician said that things were especially hard because the experience was so fresh in his mind. “The closer I was to it, it felt like I was closer to the bad stuff than I am to the good stuff,” he explained. “I felt closer to the experience of trying to escape, [to] being in an accident and being burned, trying to grab my friends from a burning plane.” Time has healed a lot of the trauma. “It’s been so many years, it’s getting easier for me,” he told Men’s Health. “There are days where I’ll wake up and never think about it.”

Ultimately, he has the Keeping Up with the Kardashians star to thank for helping him overcome his fear. “It’s still something very new to me, but having something that gives me the strength and hope to be able to overcome things that were so traumatic in my life, it just says a ton,” Barker told NYLON, adding that he “never dreamed” of getting inside a plane again. “She’s definitely that for me. I’m invincible when I’m with her.”

For more, read the full “Travis Barker Is The Pop-Punk Patriarch Of SoCal” feature story on NYLON, written by Alyssa Vingan and shot by photographer Frank Ockenfels III.

More like this
Kourtney Kardashian Claps Back At Pregnancy Speculation On Instagram
By Jake Viswanath
Who Is Nick Cannon Dating & How Many Kids Does He Have?
By Jordyn Tilchen and Radhika Menon
Khloé Kardashian Is Reportedly Dating A Private Equity Investor She Met Through Kim
By Jordyn Tilchen and Jake Viswanath
A New Portrait Shows King Charles With William & Kate Before The Queen’s Funeral
By Stephanie Topacio Long
Get Even More From Bustle — Sign Up For The Newsletter